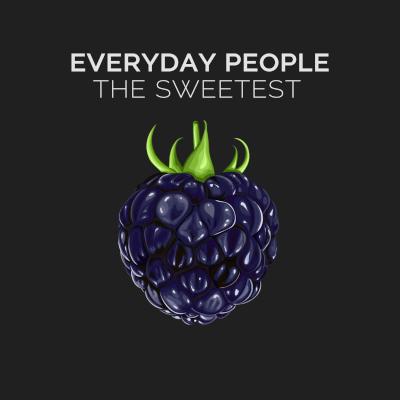 I love that Stanford's Everyday People has a clear-cut vision for itself: the group's web site describes it as "Stanford's only Hip-Hop, R&B, Motown, and Soul A Cappella Group". On The Sweetest, these singers channel the same sultry, downtempo vibe that they honed on their previous recording, The Next Episode.

Unfortunately, though, the songs on The Sweetest are a bit uneven. There are some highlights, for sure: album-opening duet Sweetest Berry is sexy and mellow at the same time, capturing a smoldering energy that's the perfect example of what Everyday People is trying to achieve. A few songs later, the two soloists on I Need A Dollar (Josh Eldridge and Robert Poole) are outstanding, reflecting the nonchalant urgency of Aloe Blacc's original. I'm not sure that having two soloists was necessary here, but luckily both voices are really strong so alternating between them doesn't detract from the performance.

Other songs fare less well. The arrangement of Criminal features Fiona Apple's solo line with phrases from the Michael Jackson song in the backs. It's a clever idea, but the song just feels cluttered and messy, completely shattering the seductive vibe that soloist Shawnee Baughman does so well. The group doesn't have the right focus on Unthinkable; lead Katherine Nasol is great, but the rest of the song lacks energy and doesn't go anywhere. Same with Thinkin' Bout Sunday: the leads and harmonies are compelling, but the extended notes in the arrangement drag down the energy.

There's a bright star towards the end of The Sweetest. On the medley Man's World / Fallin', the Man's World opening is amazing, especially powerhouse soloist Tessa Pompa — holy cow, girl can sing! And then Everyday People ups the ante, transitioning seamlessly, flawlessly, and stunningly into Fallin', and Pompa keeps singing her heart out. I wish they hadn't buried this song so deep in the album — this is the standard I want to hold Everyday People to. Stunning soloist, beautifully downtempo backs, creative arrangement, immaculate execution — this song has it all. The rest of The Sweetest isn't quite so sweet, but hidden gems like this one are worth discovering, and it proves that Everyday People is capable of greatness.

The Sweetest would be a great album to make out to. It's soulful, it's sexy, and for the most part it fades nicely into the background.

This should not be surprising to longtime fans of Stanford's Everyday People. This group has carved out a wonderful niche for itself by largely avoiding standard collegiate repertoire in favor of decades-spanning R&B, hip-hop and soul. If you enjoyed the group's last offering The Next Episode, as I did, then you'll enjoy this one too. It's more of the same.

Slow jams dominate once again, and this is clearly the group's strong suit. Only Everyday People would dare to open an album with Sweetest Berry, which clocks in at just over five minutes and takes its time getting there. It's not a strong opener per se, but it's a solid track that sets the tone for the rest of the album. Unthinkable is another standout thanks to Katherine Nasol's sultry lead. Faster tunes like All I Want Is You and I Need A Dollar also have great leads, but the songs ultimately suffer from backing blocks that are repetitive and emotionless.

The arranging on this album — all done by group members — runs the gamut. Props to Robert Poole for Thinkin' Bout Sunday, a shining example of a mashup done right: two songs (Frank Ocean's Thinkin' Bout You and Maroon 5's Sunday Morning) that are both thematically and musically similar, with harmonies and lyrics carefully selected for maximum seamlessness. Kicking the track off with a killer trio on a few crunchy chords doesn't hurt, either. On the other end of the spectrum is Aldric Ulep's take on Always Be My Baby, which sounds a lot like all the other a cappella covers of this song in existence and nothing at all like the rest of the album.

Somewhere in the middle is Criminal, also arranged by Ulep. It's an odd choice for a 2015 album release, and an unexpected one given this group's usual repertoire. It shows an intent to transform Fiona Apple's chick-rock classic into a hip-hop jam. It comes tantalizingly close to succeeding thanks to a driving vp and a bit of Michael Jackson, but it doesn't quite get there. Still, I applaud the fact that the group took the risk. If Everyday People wants to evolve and innovate, genre-bending is a great way to do it.

One part passion, one part hard work, and a huge helping of talent. Mix thoroughly in a big bowl of R&B and you end up with The Sweetest by Stanford's Everyday People. I very much enjoyed this album. The singers are all soulful, and the arrangements are full. It's like listening to a Best of R&B compilation album. In fact, my only real issue is that every track is so much like its original that I never get to know who the members of Everyday People are as musicians.

The two tracks that stand out the most to me are Always Be My Baby and Criminal. It's subtle, but there's just a sense of joy that comes through on these tracks that allows them to shine. Strong emotions come out in several tracks, such as the desire in Sweetest Berry, but getting that glimmer of the singers and arrangers genuinely enjoying the music they are creating is special. The intro and outro of Thinkin' Bout Sunday are honestly my favorite moments on the entire album. The trio is perfect.

Technically, the vocals are precise, yet soulful. The percussion is appropriate to enhance the arrangements. The arrangements themselves use clean voice leading to create an effortless sound on deceptively difficult harmonies. These are all elements of success, and the group does them well. Add to this production value that gives just enough to shed light on the important aspects of each song and continue the flow of the album, and you're one step from greatness. The final, and most difficult step, is to take a chance and express yourself through the music. Experiment with styles and solos and arrangements. This last step is missing from The Sweetest.

I was pumped when I saw End Of The Road on the track list, but t his was the only track that was a letdown for me. The backgrounds sound rigid, like a marching army. Then, this group that can create a great wall of sound and crunchy harmonies dwindles to only a handful of parts that mimic the original Boyz II Men track. It sounds hollow and sterile, and it left me disappointed.

All the pieces are in place — just take it to the next level and express yourself. Even doing covers, show what the songs mean to you, not what they meant to someone else. Keep that in mind and you'll do well.