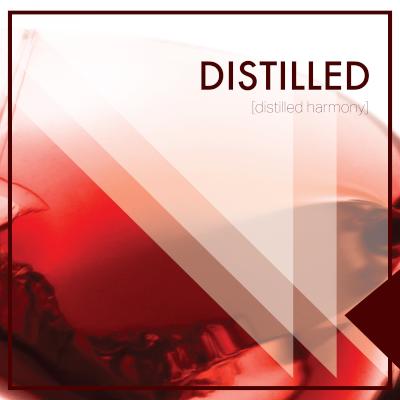 Let me go on record to say that I really like Distilled Harmony, but I don't like everything about the group's album DISTILLED. At times the album is full of energy and zest, performed by a group full of warm and mature voices. And then sometimes, it's not. Like way not. That makes assessing it as a complete work both difficult and puzzling. That's not to say that any of it is bad, but the disjointed aspects of the album take away from my overall enjoyment. There are so many missed opportunities throughout that frustrate me. I want them to succeed beyond all measure, and this debut disc doesn't do it. I'll admit that maybe my expectations were too high after my first exposure to the group.

DISTILLED contains one of my favorite tracks of 2015, which I reviewed for RARB late last year. Even though my single review was a "4", Nothing Feels Like You is an absolute joy to listen to, full of that energy and bit of swagger that I mentioned previously. It was considered for RARB's Single of the Year and by now you know that it also won the Contemporary A Cappella Recording Award (CARA) for Best Mixed Collegiate Song. This is a great song/recording that nothing else on the album lives up to.

But some of the others do try their absolute best. Dharani Rao, the soloist for Nothing Feels Like You, does an admirable job with the opening track Break Free. She's got that Ariana Grande mushy syllabic singing down pat. And she's a lot of fun. The group's primary arranger for the album, Elijah Botkin, takes a big creative risk by offering up a slow choral opening to the dance track. It's different and starts the album on a shaky note (both literally and figuratively), but it works overall thematically.

The same goes for Timebomb. Botkin again gives Distilled Harmony a playground to exercise its creative chops. Incorporating lyrics from previous songs hasn't actually grown so annoyingly cloy that it's aggravating. (Yet.) Especially when it's done as well and as sparingly as it's done here. I really enjoy the inclusion of Break Free the most here. But all of the songs create this frenetic quality that make you think of a time bomb. Brilliant. The disappointment is that conclusion/outro/ending of the album doesn't give us the explosive power that his arrangement sets up. That is a missed opportunity.

Some of the issues that I have are with production, programming, and the song selection. First, the guys are not given good songs for solos. And two of three that they do have sound too much alike. Time Travel and Pieces are the most egregious. My first few listens of an album are blind, not looking at the liner notes or following along in iTunes or my stereo text display. For the life of me, I thought these two were one long (LONG) 10-minute song.

And all of the songs have a very young sounding tonal quality with the soloists. Truthfully, that's not something that can be helped. These are singers that I'm assuming are between the ages of 18 and 21. I just haven't heard it this apparent from collegiate singers in quite a while. Production would have been better used to warm and thicken the sound. It's a very bright and buzzy album which doesn't help the tinny and thin nature of most of the soloists.

The ending of the album is both strong and a puzzler: The Parting Glass is beautiful. Sparse, ethereal, and conceptually an excellent idea, but does it make sense to close a coed dance/pop album with three women singing an Irish/Scottish folk tune?

I don't want this review to be read as a condemnation of the group. A lot of people will enjoy listening to it. I enjoy listening to it, so it receives a "4", though I expected this release to be a "5" having reviewed Nothing Feels Like You and nitpicking that to death. In reality, I could have argued that DISTILLED deserves a "3" because it should have gone through the distillation process a few more times before being released to the mass market.

In recent years, Northeastern University has proven a fertile breeding ground for innovative, impactful vocal groups. With DISTILLED, mixed group Distilled Harmony offers an admirable if ultimately inconsistent entry into the university's recorded music catalog. Engaging moments of sonic complexity are offset by moments of disinterest, leaving the listener to wonder what could have been with a shorter, tighter collection of songs. In a way that I can't recall experiencing before, there are pairs of complementary songs which are crafted from the same forge, such as Nothing Feels Like You and Say My Name with their driving beats and creative use of syllables and mouth sounds, and Weights & Measures and Parting Glass with their sparsely haunting appeal. The high moments of the album, achieved in these songs as well as Time Travel and Say You Love Me, are undermined by a sluggish start to the album on Break Free, and a forced, artificial energy in Timebomb.

There are some really engaging arrangements on DISTILLED, beginning with the dense and intriguing textures in Time Travel. Some of the credit on that song goes to production from The Vocal Company, whose sparkly pads set the table for ensuing light arpeggios and long cluster chords. It is a great example of production enhancing a complicated but successful arrangement. I can't call the song excellent because it should be a minute shorter, but it otherwise has all the elements necessary for a top score, including growth through introduction of new elements as the song progresses. There are nice moments of cascading arpeggios in Pieces and some flexibility with the number of voices, a technique which is too oft-overlooked, in Say You Love Me (not everyone needs to sing all the time!). With Nothing Feels Like You and Say My Name, Distilled Harmony achieves that elusive goal of recording an upbeat song with energy and personality which doesn't overwhelm the listener's ears. The Parting Glass has a timeless folk song feeling which is welcome and all too rare.

While DISTILLED hits many right notes, it is nevertheless flawed. The album would do better to open with the momentum of Nothing Feels Like You or Say My Name than Break Free, a mid-tempo clunker which takes far too long to cast off its pacing and beat restraints. Pieces sets up for success with a nice early build-up to a crunchy cluster chord, but then settles for repetitive patterns to its conclusion. Despite its likeable duetists, You Got Me faces similar textural problems with one nice dropout moment as the lone highlight.

There's an excellent 20-25 minutes of music hiding on this album. If Distilled Harmony can pour out the excess and capture just the essence of these moments for its next recording, the result will be something truly worth bottling.

As a Bostonian, I get really excited whenever I get to listen to albums from college and pro groups in the New England area, which I firmly believe is one of the major epicenters in the a cappella community today. After listening to DISTILLED, we all need to add Distilled Harmony to the ever-growing list of superb groups in the New England area. This album truly has everything: superb solos, fantastic arrangements, and great studio work from the ever-talented group at The Vocal Company that ties everything together.

With the first track, Ariana Grande's Break Free, I love the creative approach that the group takes in starting the song off as a ballad throughout the first verse, before switching to the more familiar pop song in the chorus and bridge. The approach gives the song an entirely different meaning in the beginning than I think Grande portrays — more of a sense of longing and heartbreak that really hits the listener. I also need to take the time to talk about the soloist, Dharani Rao ... except I really can't come up with the words to fully describe how unbelievable her performance is. From the start, there is a lot of power and strength in her delivery, but she also has tremendous control — waiting for the right moment to show off her whole range. And on the final chorus, she goes up into the stratosphere and leaves me in complete awe of her talent. It's no surprise that she was nominated for a CARA award for best mixed collegiate solo, as she knocks this one out of the park.

And this track just gets the album started! Nothing Feels Like You, which won a CARA award this year, is a rhythmic menagerie that keeps the listener on their toes, starting from the claps at the beginning to the driving percussion in the 2nd chorus to the harmonies in the upper parts that back the solo. Also, to echo what TeKay pointed out in the single review of this track, the ease with which Rao and the harmonists deliver those quick lyrics in the verses ("Cause I'm livin' in a fantasy/Every time you look at me/Kiss me if it's real"), sung with such clarity ... ladies, that's impressive. Yet, Say My Name may be my favorite track on the entire album — this track has so many different layers to it with all of the intersecting parts and the amount of syncopation, especially in the beginning. It's a pretty challenging arrangement from top to bottom, and Distilled Harmony pulls it together brilliantly.

However, while I thoroughly enjoyed most of the tracks, a couple of them did make me pause. Both You Got Me and Timebomb do not provide the same excitement as some of the other tracks like Break Free or Weights & Measures. The latter tracks that I mentioned have a direction from the arrangement that culminates in a pinnacle moment in the final chorus or somewhere towards the back half of the arrangement. But, the former two tracks feel like they just sit in a pocket that simply does not pack the same emotional and musical punch that the other tracks do. And finally, I am a little confused in the decision to make The Parting Glass an all-female arrangement for this co-ed group. Now, this could be stemming from my love of this song, which is possibly one of my favorite songs ever (what can I say, I'm a Bostonian with Irish heritage ... it's in my blood). But given the creativity and ingenuity that the group shows in some of the other tracks, I would have been interested in how the group could have written this arrangement co-ed to incorporate the men and possibly take the piece in a new direction. That said, the women sound absolutely stunning on this track.

Even though a few songs don't hit as strong of a chord as the others here, this album is a fantastic work that everyone should listen to. And make sure that you remember the name Distilled Harmony ... this group is on its way to greatness.