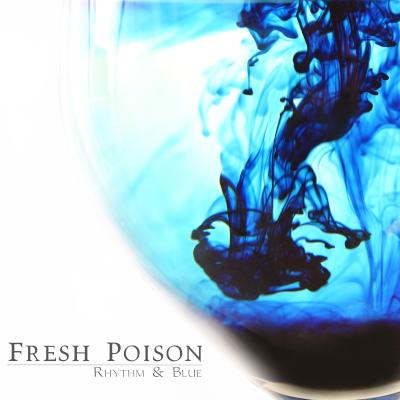 It's tough to know, and perhaps unreasonably self-aggrandizing to claim causality, if a significant quibble with a group's choice on a prior album truly affected the way they approached a subsequent release. But at the risk of giving myself way too much credit, I'm delighted to discover that with its 5-song EP Fresh Poison, Duke's Rhythm & Blue has made a conscious choice to (mostly) return to a naturalistic, human sound that is immediately more compelling than that which was showcased on the 2013 release Solid Ground.

Regrettably however — and all the more so for a group I've enjoyed greatly in the past — that may be the most effusive bit of praise I can offer on this latest offering.

Truth be told, I'm bothered by the reality that I scored all five selections as "3"s but much to my chagrin, it's also accurate. This is serviceable, somewhat pedestrian collegiate a cappella. To some extent, it felt like a throwback to 15-20 years ago, with just far better production quality. The fault, it seems, lies primarily in three areas: arrangements, dynamics, and energy.

Dynamically, there really isn't much to say. There are no haunting pianissimos or inspiring fortissimos to be found. Heck, there's barely a pulse-quickening crescendo. Verses blend into choruses, bridges segue into final repeat choruses, and I am often hard-pressed to notice the difference. Much of the fault lies in the arranging (more on that below), but (just as one example) if you're going to Take Me to Church, you need to aurally take me there and dynamic variation is one great way to do that. The choral approach in the backs are lovely, if predictable, but they lose their luster when they don't propel me into the religious experience that the chorus of that song should be, especially towards the end. Some of that is also about energy, which feels lacking in most of the backgrounds. The soloists do fare a bit better — the ladies in particular — but despite a much more "human" sound overall (vocal percussion excepted), there's a vitality and passion that I'm sure the group possesses, but which just isn't coming across.

On the arranging front, the list of what should now be almost inexcusable missteps is long. No, there don't seem to be any blatantly wrong chords (though the chromatic progression in the second verse of A Little Party Never Killed Nobody is on shaky ground) and, with an able assist (as usual) from Nick Lyons at The Vocal Company, the tuning is pretty much-spot on. The syllable choices seem to be borrowed from Off the Beat circa 1998, but where that was new and different at the time, and OTB would often layer percussive syllables to create a texture, Rhythm & Blue opts for sometimes clunky, sometimes painfully exposed syllables that generally distract the listener and/or upstage the soloist. As noted above, most of the arrangements don't delineate all that well between verses and choruses, missing opportunities to either shift the groove, or build on it, in a fashion that would give the chorus the emphasis it deserves and needs. While percussive, the aforementioned syllables also often seem out of whack with the rhythm section — that is, if you're going to utilize those sorts of imitative syllables, you would be well-served to deploy them in a manner that either mimics the instrumental lines they are replicating or creates a blended texture all its own. But singing running eighth notes homophonically on unusual syllables against nothing more than bass and vp will, more often than not, just draw attention to itself without being particularly effective. And, without meaning to pile on, if you're going to insist on doing mashups and/or medleys — or even just an interpolation (It Don't Mean a Thing (If It Ain't Got That Swing) in Fergie was cute once, not over and over) — let there be a good reason. Find a way to contrast the two songs and a novel and distinct way to segue between them, and ultimately, seek out an interesting and creative musical means of combining them at the end (as you inevitably will want to do). Sorry, but just pointing out that the choruses of Love Lockdown and Love Runs Out share a multi-note downward progression isn't revelatory in and of itself.

"Other than that, Mrs. Lincoln, what did you think of the show?" is the impression I fear you may be taking from this critique. But it really does come from a hopeful place. I've heard what this group is capable of and when they are on their game, the results can be terrific. Sadly, this is less than terrific. I look forward to the group finding itself back on Solid Ground again soon.

With an EP, there's simply no room for "pretty okay" offerings if a group hopes to make a lasting impression, and unfortunately, we get four tracks of such fare on Fresh Poison before Rhythm & Blue lays it all out with a dazzling closer.

The production on Fresh Poison is definitely the freshest part, and it often fills in for the chronic lack of intensity that's all over this release. Because of the captivating, fill-the-room production on Love Lockdown / Love Runs Out, the shortcomings are groomed into a nice-sounding track, but the issues remain. The two songs pair serviceably well, and the splashy operatic choral chords inject bursts of cool moodiness befitting of Kanye West at his best, but the too-slow tempo creates a stubborn plodding beat, even with a strong, sultry lead on top. I struggle to feel the character of the music in the too-slow tempo, and then the work slides into Love Runs Out before I've reconciled what's happening with the first song. Mashups are really becoming dangerously polarizing in a cappella: proceed with great caution.

All These Things That I've Done is as ho-hum as the opener, with some clunkier syllables adding more problems, but it does revive itself for a while when the females pop out for nice duet-style singing in the middle. The strong females on Fresh Poison are a double-edged sword, slicing out gorgeous leads and backgrounds, but making us notice that the males are not to their level, especially noticeable on All These Things That I've Done and Take Me to Church. We're back to more female gusto on A Little Party Never Killed Nobody, but again, clunky syllables distract instead of entice.

And then, in what sounds like a new album entirely, Bravado / Princess of China unfurls an amazingly gorgeous solo dripping with talent from Phoenica Zhang on Bravado (who also provides the lovely percussion for this track). This time the song pairing interweaves nicely, building to take us to interesting new sonic spaces. The newness and strength of this final selection leaves me equal parts excited and puzzled.

I've never given a "3" to these favorites from Duke in my ten years of scoring Rhythm & Blue albums. There are some legendary hits in the Rhythm & Blue catalog — if the songs on Fresh Poison are a precursor to a full-length album, I hope the upcoming selections are closer in spirit and presentation to this group's demonstrated high potential.

Brooding energy. Rhythm & Blue has developed a neat way of naming its recordings. The members eschew the musical puns and group traditions and instead pluck a lyric from one of the songs featured on the album. It's not a chorus or an especially prominent lyric. It's a fraction of a phrase that gets taken out of context and takes on a whole new meaning of its own. Like the last few releases from this established co-ed group at Duke University, the title of this EP sets a bold tone while hooking your attention to solve the mystery of Fresh Poison.

Fresh Poison is short and sweet. The five songs clock in at just under twenty minutes, including two mashups and a line from Duke Ellington's It Don't Mean a Thing (If It Ain't Got that Swing) that could almost pass for a third. The five arrangements are penned by four different group members, which is an impressively deep arranging bench for collegiate a cappella. The advantage of different people interpreting so much source material in such a short EP is that there is never a dull moment. With all the different styles appropriately paced, you can easily set the whole collection on repeat and each track still sounds fresh.

Though Rhythm & Blue portrays a range of styles, the group does not stray far from mainstream pop. Generally this is not the end of the world because Rhythm & Blue does such wonderful things to the songs that you've heard a million times before. The backgrounds blend smoothly, the production spruces up and balances everything cleanly, and the leads consistently command a strong presence. The group excels when wielding the more anguished tones and brooding energy of Love Lockdown / Love Runs Out, Take Me to Church, and Bravado / Princess of China. It is when the singers perk up into the more lively All These Things That I've Done and A Little Party Never Killed Nobody that the arrangements get more jumbled and the poison gets stale.

Even if every little piece doesn't fall into place, Rhythm & Blue still stands out in the sea of collegiate a cappella. I first discovered the group when I saw the rave reviews for House on Fire in 2011, and to this day Love the Way You Lie is one of my favorite recordings to throw on a playlist. Fresh Poison carries on the tradition with gripping ambiance, top notch singing, and some monster powerful moments. Before you go scouring the Internet for lyrics to these songs, get a copy of this EP and figure out for yourself how Rhythm & Blue came up with such a fine idea for Fresh Poison.