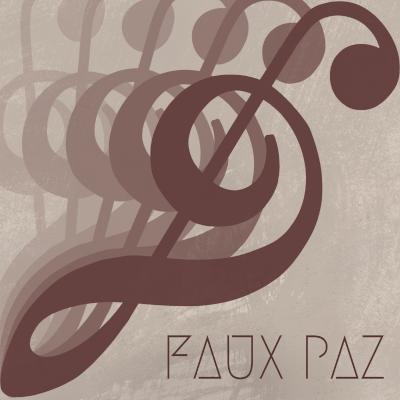 Faux Paz specializes in sweat-dripping intensity. If you like your a cappella music sweet and emotionally tender, making you nostalgic for your first romance or those carefree days of high school, that ain't happening with Faux Paz. This is loud, dense, and intense, quite nearly the whole way through.

Half of these songs carried the Faux Paz to the 2015 ICCA Finals, including the high-thrills opener Come Into My Head; creatively entertaining La La La; amazingly arranged Gone; and dark, theatrically-interpreted Take Me To Church. That was a great set, and having it recorded isn't merely a keepsake for the Faux Paz, but quite the experience for the listener at home, too. The production work here from The Vocal Company is a marvel, giving each of these tracks a thick, characteristic atmosphere that pulls everything together as distinctly Faux Paz, but finds continual elements to highlight and twist and damage in a gorgeous tortured-artist kind of style (read: not for the purists among you, as you may faint). So many of these tracks have distinct intros, too, masterfully crafted from the production team. Of the Finals set, I am most impressed with Gone; the arrangement is so unexpected and risky, with the soloist starting out on her own for a long while before the group enters in pieces, in fragments really, tying lines into one another by the song's end. To the collaboration of arrangers —  Michael Brisentine, Aryssa Burrs, and Lucas Tax  — you've done something incredible here. From the non-Finals four, Chandelier is not to be missed! It has a rock opera-style intro with absolutely no lulls from the first second to the last; the song starts out in gripping fashion and only grows more compelling with each new chorus explosion. Honestly, how? Even with these covers, there is a strong, present undercurrent of creativity in Faux Paz.

Faux Paz has a history of solid, engaging work. This group has stuck to its song choice/stylistic wheelhouse over time, and the result's been success. Though as with other releases, I still hear the women absolutely kickboxing the heck out each note and solo, while the men are present but in the back row for the show. This group could go Next, Next Level if the males and females were equal heavyweights in the ring. All the same, Faux Paz is simply awesome a cappella.

The University of Maryland's coed group Faux Paz has been consistently solid in the pop/rock sphere for the better part of the last decade. One thing that the group has done well that they continue here is song choice and soloist choice: without exception, the leads here are perfectly-suited to each of these songs. Lynique Webster has a gorgeous give-and-take to her voice on Come Into My Head, Brandon Schatt and Joshua Singer sound perfect together on La La La, and Frankie Spano channels a sexily disinterested vibe on Take Me To Church. My only issue with soloist choice is actually with the album's production; the backs are too high in the mix on Icarus and sometimes overpower soloist Chris Lim. His voice sounds great on the song, but there are times when the most important part (ie, the solo) gets lost in a sea of energy from the rest of the group.

Besides the occasional issue with balance, the backs do a great job here with dynamics and phrasing. The backs on Take Me To Church sound like a hymn; certainly other groups have used religious inspiration for arrangements of this song, but Faux Paz's execution here is stunning. The beginning of Come Into My Head features some gorgeous stretchy phrases behind soloist Webster that are enchanting. Chandelier switches between uptempo dance moments and more melodic phrasings, and the group knows when to punch and when to be smooth. On tender Gone, the backs know to take a distant back seat to Aryssa Burrs's gorgeous lead; they provide enough texture and movement to keep the song progressing in its story while still allowing Burrs's emotive delivery to keep the spotlight.

Where Faux Paz struggles to be fully compelling is with the overall volume. Much of the album operates at a 7 or above on the volume scale, when some of the more compelling and emotional moments are when the group is quieter. Come Into My Head starts beautifully and sounds great at the bridge, but the rest of the song gets a bit messy with its shoutiness. The choruses of Luxury sound a bit chaotic with the exception of some outstanding trumpets; there's magic when the lyrical melody shines through, but it's tough to get a read on some of the instrumental breaks in the song. Also, I really wanted some quieter moments in Icarus so that a build could burst through, but the song never really has that dynamic shift.

Faux Paz is consistent, but that consistency sometimes sounds like complacency here: there's energy and emotion on these songs, for sure, but the album doesn't have any truly outstanding tracks. There are beautiful moments here, but no overall remarkable or memorable performances. It's hard to pinpoint exactly why — as I've written many times before, it's hard to know whether some of these choices rest with the group's artistic vision or with the production team's recording choices. The group features beautiful voices — every soloist choice here can back that up — but somewhere along the way, the storytelling in these songs gets a little bit muddled, and there's not enough dynamic variation to make Faux Paz as compelling as the group's previous releases.

Faux Paz's self-titled entry follows up its predecessor, Chaos, utilizing a similar m.o.: big, brash and dramatic. I'd learned through my previous encounter with Faux Paz that energy seems to be at the center of the group's identity. Much like Chaos, Faux Paz is a generally concise, pointed sounding project. Where many albums seem to taper off throughout the duration, the sixth, seventh, and eighth tracks on Faux Paz still emanate the same theatrical intensity of the first. Oddly enough, what prevents me from engrossing myself in this project, just like Chaos, is ... the energy.

While the group's high working motor acts as its greatest asset, there are moments where the energy on this album doesn't feel quite as focused or channeled as it should be. The song Come Into My Head reveals much of this. The arrangement is ornate, packed with riffs, crunchy rhythmic vocal percussion and a boisterous solo leading the charge. What prevents the song with all of these key ingredients from becoming the true "5" it could be is cohesion. The song sounds a bit noisy, almost saturated. At times the different parts — the percussion, the backing vocals, the solo — sound as if they are existing independently as opposed to mutually. This coupled with the frantic pace that picks up after about a minute into the track makes it feel a bit like a runaway train. While the energy here serves as a great entertaining hook for an action-packed intro, I felt it ultimately takes away from the underlying funky, groovy character that makes the song interesting.

La La La is a similar example. Everything is lively, and bright, but lacks the bounce and danceability of its genre. I do appreciate the direction the soloists take, beginning with a darker baritone before pairing it with the airy tenor. While the cover feels a bit stiff in comparison to its original, the soloists create some moments together down the stretch.

In general, Faux Paz is a crowd pleaser. The group hasn't necessarily reinvented the wheel with its arrangements, but they've made great selections between Sia, Bastille, and Hozier covers. What stops me from bringing the album into the land of "5"s is musicality. For certain genres, in particular where groove and blend take precedent, I'd like to see Faux Paz channel its energy into capturing that essence. My personal reccomendations from this offering include Chandelier, Gone, and Luxury.