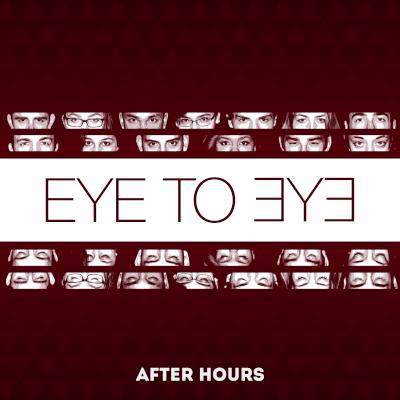 After Hours gives us a troubled relationship theme for this release, but the musical impact just isn't strong enough. While Eye to Eye isn't your next must-have recording, the group does offer us a clear stylistic choice in this EP.

What you'll hear plenty of on Eye to Eye: heaps of production. Each track is swimming in effects, fake drums, tuning help, reverb, and artificially produced thick atmospheres that often favor the treble lines. All of this has its place — particularly if used to complement already-strong vocals and engaging arrangements — but there's plenty of evidence that suggests After Hours needs to work on its ensemble sound and musical fundamentals, which gives the studio work here more of a make-up concealment feel rather than an enhancement shine. Take the two down-tempo pieces, I Can't Make You Love Me and Believe. It takes a solid ensemble to keep ballads from sounding sluggish or sleepy — combating this requires sustained intensity and a well-executed energetic drive that really goes places, even mapped out if warranted, which neither performance here has. The voices are slow to lock into vowels in the slower pieces too, creating a wah-wah effect on the vowels instead of a tight and precise blend. Even if it's a slow song, your mouth still has to be fast and purposeful because you're part of a group that has to stay tightly in-sync and match vowels. One can also hear production remnants in these ballads, like the numerous cuts in the track to use the best takes as I Can't Make You Love Me ticks toward the four-minute mark. No one wants to notice editing choices that distract from the performance.

The other three works have some performance pop and zing, particular the wailing rocker lead on Comeback. On the arrangement front, though, all five pieces could use more thought to create more pop and zing. One Last Time is the strongest offering because it has an energized emotional drive and conviction from the ensemble that's too-absent on the rest of Eye to Eye. It was a great choice to end on, and hopefully it'll carry us into the next recording era of After Hours with the stage set for a more memorable release.

Mixed group After Hours put some thought into the tracking of its latest release, Eye to Eye. In the liner notes, the group describes that the five songs follow "a relationship in turmoil" through "a fight, the subsequent revenge, a realization, a plea, and a final encounter". I'm not sure that chronology is readily apparent without the explanation, but the story arc does make the songs work together more smoothly in this context.

After Hours has wisely bookended Eye to Eye with its two strongest songs. Love Runs Out starts solidly, has great dynamics, and peaks beautifully with John Queenan III's arrangement. The EP ends with Kimberly Rouse's crystal clear solo on One Last Time; the group has some great phrasing here as well.

It's the songs in the middle of this EP that cause the group some problems. Comeback is dialed up to about 15, and while I understand why that passion makes sense in the context of the EP's story arc, the song gets a little shouty, which really blurs any emotional connection with the listener. I Can't Make You Love Me has some nice dynamics, but the song just doesn't make sense as a duet/conversation between a male and female lead. And Believe just doesn't feel like it's in the right key or register for the soloist; if this song is supposed to be the "plea" that the group described, the dry delivery doesn't seem convincing at all.

I do like the thought that After Hours put into its song selection and tracking here; it's definitely easier to hear these songs as a cohesive group when they're telling a bigger story in context with each other. Overall, the EP sounds bright and crisp and has that shimmery pop sheen we've come to expect from After Hours. But a few unfortunate interpretation and soloist choices make the EP sag in the middle. The best songs here are still worth hearing, but the EP as a whole is uneven.

When I last heard After Hours on its album Duality, the main point that I said then was that this University of Rochester mixed group has a great presentation, but it is very inconsistent in its delivery. Now, a year removed from that project, Eye to Eye brings a very different approach. As opposed to the usual yearbook album that seems to be the norm of most collegiate groups, this album is designed to portray a story. More specifically, this album deals with the story of a relationship ending. Overall, it's not a bad idea; however, it's not really the headline of the review. While many of the consistency problems that existed for After Hours on Duality have gone away, the presentation of Eye to Eye is not as crisp and clean.

Even though both albums used the same companies for mixing and mastering, the sounds are very different. The sound for this album is very bright. Though there's nothing wrong with a brighter sound, the proper weight needs to be given to the lower middle harmonies, otherwise the chords start sounding thin. In the case of Comeback, the arrangement puts a lot of emphasis on the upper parts but the upper male voices are lacking. The balance is very top-heavy with an added bass line. Add a soprano with a timbre that is a bit piercing, and the balance suddenly becomes very skewed.

However, if the group is able to utilize this bright mixing, the product is marvelous. Jalon Howard has a voice that lends itself perfectly to I Can't Make You Love Me. On top of that, John Queenan III wrote an arrangement that utilizes bell tones perfectly. The arrangement uses the bright sound to deliver a glorious song. There are moments where you can't help but stop whatever you're doing and listen to the music. As I said last time, when everyone is locked into each other, After Hours shines. That trend continues here.

Now, let's look at the theme. Themes are great. I'm a huge fan of listening to a set of music, and having a strong sense of finality when the last note of the album finishes ringing. However, After Hours does little to establish a sense of finality on Eye to Eye. The theme exists in lyrics only. If the album had been handed to me without the theme explicitly stated, I would not have guessed that it existed. The tracks don't meld together, there are no little clips of other songs within any of the numbers. Each song is completely independent of the other, but a story exists on paper. It doesn't take a lot of music intricacy to create a theme, but at some level the effort needs to be put in so that everybody knows there is a theme; as much as I wanted it to be clear, it doesn't feel like After Hours put in the effort at the forefront to make it notable.

There are shining moments in Eye to Eye, but the overall presentation leaves something to be desired. With every new album comes new ideas and a new presentation. This presentation has its merits, but also its downfalls. After Hours has ideas galore and the abilities needed to capitalize on the ideas, but performing both simultaneously and consistently still seems to elude the group.