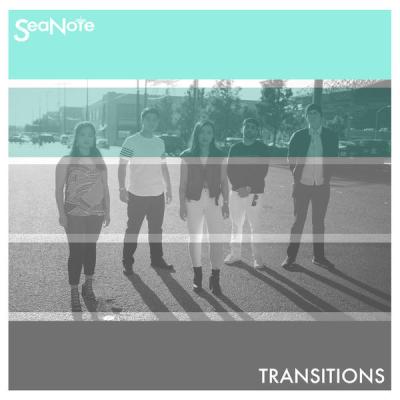 Seattle-based SeaNote isn't the next PTX, but they just might make a near-perfect addition to your PTX playlist.

Transitions marks SeaNote's second effort in the recording studio. The first garnered a mixed response from RARB reviewers, but this one shines quite a bit more brightly for my tastes, delivering a wealth of groove-driven pop offerings and compelling leads.

Buttery smooth bass and tasteful, natural-sounding beatboxing form SeaNote's rhythm section. Smooth open vowels, lyrics, and club-inspired vocal swagger make up the arranging style. There's no collegiate, overemphasized nonsense syllables here, but also no true instrumental imitation either. Suspensions are freely used in this harmonic language, but this is contemporary a cappella beginning to end, not jazz, as all the song selections will attest.

Add a deft sense of programming and leads that bring real emotion to the table and Transitions crests to excellence.

Nearly every small contemporary a cappella group will invariably get the well-meaning newbie fan comparing them to the only group everyone knows: Pentatonix — the presumed inventors of contemporary a cappella (if you're a 7th grader). We a cappella trench soldiers don't confuse popularity with invention, but we do recognize that a rising tide lifts all boats. So we say thanks just as late 80s groups said thanks for Bobby McFerrin comparisons. Despite the opening sentence, this reviewer is loathe to then embrace such plebe conflation, but as stated above, in this case, SeaNote actually is a very welcome addition to the Pentatonix-themed playlist.

Now, admittedly SeaNote is lighter on the vocal runs and dramatics. But for the casual listener, a mixed ensemble, five people strong, singing pop over sweet beats (that haven't been cut and pasted), a rich genuine bass, with only the lightest of carefully placed studio enhancements, yet conjuring a dash of electronica in the arranging and tone color, is just what a rabid Pentatonix fan craves. Neither group (re)invented the genre, but both are incredibly listenable and very talented.

We haven't heard from Seattle's quintet SeaNote since its 2014 EP Vocal Static, a release that was a promising debut with lots of creative flair. The group still has flashes of that creative approach to a cappella on Transitions, but the album feels like two separate EPs: one with unusual covers, engaging arrangements, and compelling originals; and one with the same Top 40 approach to a cappella as every other group in the country.

The best moments on Transitions are compelling and memorable: the arrangement of opening track Focus moves at the perfect pace and captures listeners' attention right from the get-go. SeaNote has two originals here: Amanda Tran's Fatal Disease and Shaheer Aftab's Take It for Granted, both of which fit in with the group's pop-rock wheelhouse. Take It for Granted is a spoken rap with sultry backs that particularly complements the rest of Transitions while still sounding unique.

As interesting as some songs are on Transitions, there are just as many that sound like filler. They're way too slow (Centuries and especially the funereally-paced Fight/Roar), too low-energy (Ordinary People, Let It Go), or just not interesting enough (I Choose You, despite Shaheer Aftab's engaging percussion line). The arrangements and engagement of the singers just doesn't hold up to the stronger tracks here, and they actually drag the album down as a whole, as the momentum shifts every few songs.

This album really does feel like two EPs — an engaging, interesting one that would have earned a "4", and a generic, drab one that's about a "2"; between the two, Transitions is basically an average album. I do commend the group's thorough liner notes, which include original artists as well as songwriters — but they're not as thorough as they seem on the surface (Suzanne Vega is notably absent from the Centuries list). Oversights like this make the whole album seem rushed, which is consistent with the uneven sound on Transitions.

I think I would really enjoy a live gig by SeaNote — however, the group's latest recorded effort falls somewhat flat in my ears.

The tracklist looks typical enough for a contemporary a cappella album — a selection of Top 40 songs, a mashup, and even a few originals, which I'm always happy to see. I need to give kudos to Amanda Tran and Shaheer Aftab here (who penned Fatal Disease and Take It for Granted, respectively). Actually, I was unfamiliar with most of the songs covered, and didn't realize those two songs weren't Top 40 covers until I pulled up the liner notes to prepare for writing this review. Both covers and originals are performed with confidence, the soloists are consistently strong and expressive, and the arrangements (mostly by Isaiah Lin and Michael Kibbe) are nice. So why, you might wonder, do I struggle to embrace Transitions?

A big part of it is related to vocal percussion. Shaheer Aftab's perc is tight and colorful, but nonetheless upsetting at times. When it comes to vp, I believe the most important skill to master is restraint. Often less is more, and sometimes the right choice might be to make no sound at all. I love what Aftab does on tracks like Ordinary People and Stitches, but as much as his percussion enhances those tracks, it seems distracting at best and detrimental at worst in Let It Go and I Choose You. It's clear Aftab is a skilled percussionist from the other tracks, so I don't see the need for him to show off during tracks that might sound better with much sparser percussion, or even none at all. Maybe this is a minor issue and shouldn't outweigh the many positive aspects I described above, but it impacted my enjoyment enough that I felt the need to devote this entire paragraph to it. Percussion matters, and there is such a thing as too much of it.

The other major qualm I have with Transitions is the overall production. It seems SeaNote went into the studio with its live arrangements, recorded them as they would be performed on stage (the vp even gets taken over by Tran while Aftab performs the rap in Stitches), and told their engineer George Wiederkehr to change as little as possible. The result is transparent, which works really well for the upper parts — less so for the rhythm section, which ends up sounding rather thin. It's also stuck in a sort of sonic limbo, with neither the atmosphere of a live album, let alone a live performance, nor the mixing magic that usually makes up for its absence on a studio album. SeaNote features great arrangers, songwriters, and singers. It's a shame they are let down by the spartan production, which diminishes what otherwise might have been a great album, instead of merely a pretty good one.