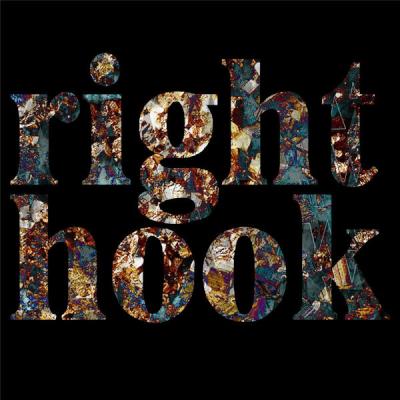 The Virginia Belles have established a long history of covering beautiful, tender songs from female artists or female-fronted bands. Right Hook continues that tradition with covers from artists such as Lorde, Ingrid Michaelson, Sia, and Paramore.

These are all pleasant covers of pleasant songs. They're true to their originals, the blend and tone are solid, and the soloists all fit, but there just isn't a lot here that makes me want to go back and listen to this release again.

The three songs that do stand out — Time Machine, Don't Wake Me Up, and I Found — all have some sort of dynamic variation that helps draw the ear into the song. Soloist Michelle Gahagan sounds fantastic on Time Machine, and the murmuring slow build on I Found is stunning if you've made it that far on the album.

The other songs here are lovely but not memorable. If you like the originals, these covers are pleasant enough, but many of them tend to drag without a lot of dynamics — or just blend into one another. The Belles do a great job of capturing a shimmering sound and a bright, airy tone, but they do it so often here that the songs just blur together, and the album feels a lot longer than it actually is.

The most odd song here is Bang Bang; not only is it totally jarring in its discontinuity from the rest of Right Hook's tender sound, but it's also odd to put the highest-energy song at the end of the album. After 39 minutes, listeners will think they know who the Belles are, and then the last track will negate all that. It may be a harbinger of a new sound for the Belles in the future, or maybe it's just a crazy bonus track the ladies tacked on for fun. Either way, it's a bizarre choice on this otherwise lulling album of downtempo gentle ballads.

Right Hook, the latest studio release from the Virginia Belles, is consistent but uninspired. Following in the steps of Tintinnabulation (2014) and Good Morning, Mr. Jefferson (2011), Right Hook is nothing new.

Despite giving energetic performances, the song selections are far too similar. Team, Goodness Gracious, Ain't It Fun, and Torpedo all start to blend together after awhile. Though we are given a break from these mid-tempo tracks for some current, stereotypical a cappella covers with tracks like Ain't It Fun, Elastic Heart, and Bang Bang, all of which many a cappella groups have sung or are currently singing.

The arrangements featured on Right Hook never seem to reach the talent level that the Belles are capable of achieving. These women are talented enough to take on more than transcriptions. The fascinating part about the arranging, though, is the consistency of sound. The quality and sound of each arrangement is nearly identical; an exploit that even some of the most accomplished collegiate a cappella groups struggle with.

With these natural sounding arrangements, it would be ideal to have production that matches and captures that organic vocal quality. However, the result here is a flat and compressed sound that distracts from, rather than complements, the arrangements.

Right Hook is pleasant, but monotonous. The solo performances and production work are unremarkable and the arrangements are executed with precision, but if you're in search of groundbreaking all-female a cappella — I would consider searching elsewhere.

Right Hook, the new album from the Virginia Belles, does pack a punch, but its impact leaves no lasting mark for those genre lovers looking for the next heavy weight champion of a cappella album. While there are many moments where the soloist's voices float like a butterfly, the lack of a consistent driving energy, imbalance of background voices, and overcompensation of effects seem to sting like a bee. All boxing puns aside, the Virginia Belles present an album which fans, family, and alums are sure to be proud of, yet on a larger scale is more of an average release for our genre lovers.

Right Hook has many highlighted moments and flashes of good work throughout the album, as well as some great stylistic soloists. These flashes can primarily be seen in tracks like Run Run Run, Don't Wake Me Up, Ain't It Fun, and I Found. With tracks Run Run Run and Don't Wake Me Up, the Belles show a quality blend across the board and these are some of the first tracks that fully grab your attention and maintain it. The soloists also really claim the song and the effects don't distract you from the focus of the track. Speaking of soloists, Ashley Brown brings a perfect helping of soul in her rendition of Black Sheep, and Cat Wyatt's vocals leave you entranced on the album's best track, I Found. This song is a true gem on Right Hook — not only does I Found show the group's tightest balance and blend, but it is unlike anything else you will listen to on this album and many like it. The haunting and eerie opening that leads to a more reflective interpretation is a keeper for sure.

Now to the bumps in the road. Overall this group has the talent and voices, but there are many occasions where it seems the Belles overcompensate with effects on backgrounds and sometimes even solos, adding them without a specific focus or need. This can be seen in pieces such as Team, Torpedo, and Goodness Gracious. Torpedo really highlights this issue with both the background voices and soloist feeling robotic and having more of a cold sound due to the heavy application of this effect. These moments seem to be very present and unnatural sounding, especially after you hear the group's full sound and blend later on in the album.

Another major pitfall is repetitive arrangements where the energy just lacks throughout, key examples being Team, Time Machine, and Black Sheep, the latter having a phenomenal soloist who becomes under-appreciated due to being meshed with a redundant background. Overall this lack of complexity really takes away from the work that the group has released. Their voices may be stunning as a whole, but the group's exact cover arrangements and their repetitive nature really reduces any climactic building moments throughout each individual song and Right Hook as a larger work.

Due to the over use of effects and lack of consistent driving energy, I would pass on this album when looking to be knocked off your feet by an a cappella "heavyweight", but be sure to check out I Found, a true diamond in the rough.