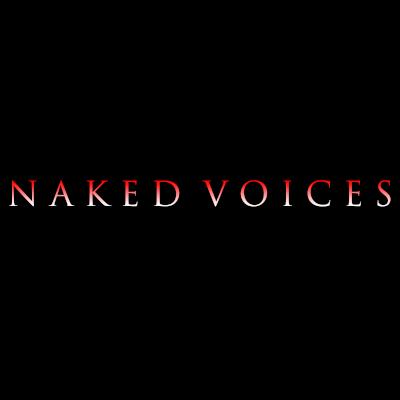 Naked Voices, Vol I. is RARB's introduction to UCSB's Naked Voices. After multiple listens, I'm left confused about this group's point of view. On the one hand, the EP is full of recent pop songs, putting the Naked Voices squarely into the "contemporary Top 40" camp of a cappella.

But there are a few moments here that don't fit in with that aesthetic. Ain't No Mountain High Enough is an oddball song choice among modern pop songs, and the group's arrangement embraces a slow, sultry pacing that builds suspense for nearly two minutes until the song kicks into its normal tempo. The singers incorporate that same startlingly-different intro on both Too Close and Crazy in Love, but they don't stick with it long enough: I'd love to hear the group try out new arrangements for these (somewhat overdone) songs that turn them upside-down with unexpected interpretations. As these songs stand now, these little intro teasers are too short and don't add anything to these works other than a hint of regret at the road not taken.

The group does attempt a different approach on Chandelier by singing the song through a male perspective. It's the most successful song on Vol I., and Alexander Hudson's voice has just the right balance of power and fragility. It's a subtly fresh take on an overdone song, and Naked Voices should be very proud of this recording.

But the rest of the EP doesn't present a fresh point of view or tell me much about Naked Voices' aesthetic beyond enjoying pop songs. The soloists on Bang Bang are shrill and difficult to listen to, and while Too Close and River are pleasant in the moment, they don't leave much of a lasting impression after the EP is done.

Naked Voices dabbles in some interesting ideas here, and when the group does deviate from straightforward covers, the result is quite enjoyable. I would've loved to hear the unusual intros fleshed out into full songs that embrace the unexpected, but most of Vol I. doesn't tell me enough about Naked Voices or the group's perspective on a cappella.

When scanning the track list for this release from Naked Voices, you can't help but get excited. I mean, Sia, Jessie J, and Queen B — what's not to like about that?! However, as you get into each track, patterns start to emerge that turns a potentially great album into just so-so.

Let's take a look at Alex Clare's Too Close as an example. I really like the slow & haunting introduction to the track, but I think that it would have made a bigger impact if it was slightly softer at the beginning and more attention was given to phrasing throughout each line. Rather than singing each line fairly straight, the track would have benefited if the group picked spots to swell or crescendo on individual lines (such as when the bass joins the other three parts) that would give the section more of an eerie and dynamic start. When Jake Goldman comes in with the melody, the group jumps to a mezzo forte/forte dynamic level and does not change it all that much for the remainder of the track. The lack of dynamic change not only takes away a lot of emotion that the group is attempting to build up in the beginning, but it also overpowers Goldman in the chorus. It overpowers him so much that I am drawn to the backing sopranos when the lead should be taking the spotlight in that moment. Similar production happens on Bang Bang and River — background vocals, and in certain cases the vp, that are simply too loud and overpowering to focus on the soloist.

While adjusting the balance of the mix and adding more dynamic contrast in places like a chorus will definitely help in the future, what could fix this issue is focusing on the arrangements more. Much of the background vocals in the upper parts are sustained "ahh" vowels, which is naturally a louder vowel than a vowel like an "ooh". On top of the vowel being louder, the group chooses not to give the individual notes a sense of movement or growth resulting in a flat sound. Adding a more subdivided rhythm in place of the sustained whole notes or changing up the vowel (or even switching it to words) could add a new dimension to the vocals and give the group more chances to show off what it can truly do.

Naked Voices showcases some of this skill in Chandelier. Starting with a gorgeous solo from Alexander Hudson, the backgrounds show more movement and energy as Nissi Vasa's arrangement has more of the parts singing the lyrics (whether it was the "one two three, drink" in the verses or even a part of the choruses). Naturally, each performer has the ability to grow and swell each note a lot more than on just the "ahh" vowel in some of the other tracks. Even though I still think some moments are a little louder than they should be (specifically the 2nd chorus), the emotion that the group demonstrates from start to finish easily makes this my favorite track on the Vol. I.

As Naked Voices moves forward to its next release, I challenge the group to focus more on the overall musicality of each track. Something as small as switching from an "ahh" to an "ooh" or adding a decrescendo in the bridge of a song can make a huge difference in the emotion that the listener feels. If the group follows its own example from Chandelier, then it is on the right track to make a stellar record the next go-around.

Naked Voices has released its first album, Naked Voices, Vol 1., and all I can say is I'm already anxiously awaiting a Vol II. This group from UC Santa Barbara comes out guns blazing with its first six-track album featuring pop hits of old and new. Vol I. highlights the group's balance and blend, which rivals that of many top college groups around the nation. The album also has flashes of brilliant innovation, mainly in tracks Ain't No Mountain High Enough and Crazy in Love that I hope to see more of in future projects. These tracks really brought this album to the next level.

Initially diving into Vol I. with the track Bang Bang, I heard the same old version that nearly all college groups insist on performing. This left me mild-mannered about the rest of the album, thinking this was going to be a release of repetitive pop tracks that lack enthusiasm and energy. Boy was I proved wrong. The next two tracks, River and Too Close, are pleasing both tonally and succeed at maintaining your interest while keeping a tight blend. These tracks serve as a nice taste of what follows, featuring creative flashes that show you the group's originality, as well as some of that crunchy dissonance that you love to hear when done right.

Yet what really helps the album strike a chord with not only the everyday music lover, but also the avid a cappella listener, are the final three tracks. Throughout these songs we are shown tremendous amounts of talent, passion, and soul from soloists Hunter Schwarz, Peyton Lyon, Alexander Hudson, and Nissi Vasa on each of their featured tracks (Schwarz and Lyon on Ain't No Mountain High Enough; Hudson on Chandelier; and Vasa on Crazy in Love). Ain't No Mountain High Enough opens with a highly innovative intro that sparks your curiosity and captures your ear then flawlessly transitions to the recognizable tune that we all know and love. That track and Crazy in Love are the real gems from Vol 1. The latter not only incorporates other Beyoncé tracks in a non-distracting manner, but ends with a bang that you'll have to listen to yourself.

Naked Voices, Vol I. shows the pure, natural sound of quite a talented group. The production on this album is just right and the blend of the group is something to smile about. Definitely check this album out and hopefully the Naked Voices give us more of that original innovation on future recordings.