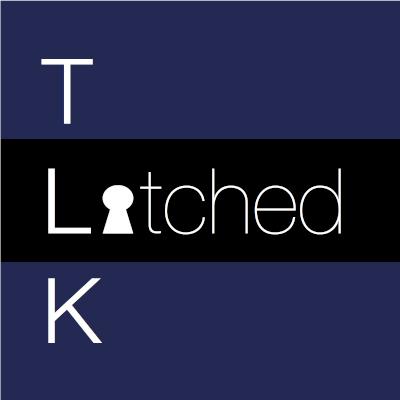 If you need a refresher, The Lost Keys made such an enormous cannonball with the group's debut album Unlocked that the release basically drained the RARB pool. Our Picks that year included Unlocked for Album of the Year, plus two songs from Unlocked earning Track of the Year nods. That's totally crazy for a rookie recording.

Back with jazz-funk follow-up Latched, The Lost Keys offer a lot of what you already like about these NY singers — most notably very strong leads and creative charts. This is a group that loves standalone intros, segment-based scores, subtle and strong transitions equally, and tempo shifts — all arranging approaches that reduce redundancy and keep this listener on her toes.

All of the tracks have some caveat that limits the full potential, however.

Ghost is the album's first hook, which you'll really perk up for once the beat drops. The intro here, however, is too slow and unfocused for the jam waiting to launch. The arrangement could use further editing, too — the very long "Give Up" section sounds tacked on for the sake of uniformity.

The intro for Settle Down is a miss for me, too. But the construction of the arrangement is a delight, switching between legato and staccato movements in the backs to create an aural hard and soft that is quite nice.

I like the story for Same Drugs / Too Good, but the backs and vp sound too soft and loose.

There's another distinct intro for House of the Rising Sun. The song is atmospheric and nicely built with its shifting tempos, but eventually becomes too mechanical sounding in tuning and blend, especially with the gentlemen — this really disconnects from the lead's natural power wailing.

An unusually elegant mashup is next with Dancing On My Own All By Myself. It features just the ladies of The Lost Keys, and the simple but smart use of the word "ha" in the arrangement is enough to give me chills. I like the space and growth here, too.

You can't miss the pizzazz and punch on the album's moniker Latch, nor can you help bopping along to this super fun interpretation.

The most traditional jazz piece comes next with Do You Wanna Do Nothing With Me?, a super uptempo work with a classic vocal trumpet, too.

Lastly, the album closes with Shape of You Remix. This one deftly interweaves about eleven songs into one tidy package, but it's more gimmicky than impactful.

And there you have it: no clean "5"s from me on release two, though I certainly appreciate the writing risks and the spotlight-stealing leads. A few areas of the production keep me at arm's length, too, including the excessive reverb throughout, and the patches where the backs suddenly shift to an artificial sound while the lead is wailing au naturel (listen to House of the Rising Sun in its completion to hear production choices that do less complementing and more alienating for my ears).

At times peppy, at times moody, but always done with great intention, come admire the arranging and big pipes on Latched.

Every time I think I've got the Lost Keys figured out, the group throws me for a loop. And that's a good thing: the group's latest recording, Latched, starts with two contemporary pop songs (Ella Henderson's Ghost and Kimbra's Settle Down). But then there are mash-ups (Same Drugs / Too Good and Dancing On My Own All By Myself: A Mash-Up), a classic tune (House of the Rising Sun), and a cover that includes everything but the kitchen sink (Bonus: Shape of You Remix). If it's not too much of a mixed metaphor, my listening ears were definitely on their toes.

My favorite piece here is Dancing On My Own All By Myself: A Mash-Up, which merges Robyn's Dancing On My Own with On My Own from Les Misérables and snippets of Eric Carmen's All By Myself. The arrangement by Morgan Reilly is fantastic: these songs work so well together, and Reilly has woven them in and out of one another so seamlessly that they tell a new story that complements the lyrics of the original songs. The group's delivery is perfect, the soloists ooze with emotion, and the group as a whole just captures the sorrow/hopefulness of being alone.

But that's far from the only great moment here: House of the Rising Sun is attention-grabbing, from Jamie Serkin's powerful lead all the way through Keĳi Ishiguri's thoughtful arrangement that grows from a solo line to a booming group sing-along and then drops back down to a somber solo ending. Do You Wanna Do Nothing With Me? is bright, catchy, and uptempo, while Same Drugs / Too Good turns the two individual songs into a conversation.

In fact, I'd have to say that the first two numbers are the weakest here — not because they're bad (they're not: the soloists are solid, the arrangements work, and the group sings well together), but because they're too expected. The Lost Keys work best with the unexpected, and these two songs could be from any contemporary pop a cappella group. The only other weak moment is Shape of You Remix, which is a hodge-podge of song snippets that is probably incredible live as the audience recognizes a smattering of different recent pop songs, but in a recording, the dozens of moving parts are just too much.

At its best, Latched is compelling, unexpected, and unlike most other a cappella recordings you've heard this year. At its worst, the album is merely good(!). Across the board, though, these singers have delivered compelling renditions of the songs they've chosen to cover (or mash up), and that makes Latched an album worth hearing this year.

In listening to Latched, I kept having the same thought: something just feels just slightly off. It's that same feeling when you go clothes shopping and you like the look of those pants or that sweater, but neither quite fits right. Perhaps the sweater is too baggy or the pants are too tight. You want to like the article of clothing but can't bring yourself to love it enough to pay for it. Latched, in many ways, feels very similar to this.

The New York-based CAL group The Lost Keys is relatively new to recorded a cappella, having debuted Unlocked in 2015. This group of fourteen looks and sounds like a collection of twenty-somethings not very far removed from their collegiate a cappella days. With this make-up, I expect the group sound to be that of a small army, often boasting big chords and intricate arrangements to make full use of the numbers and experience of the collective. There's just one issue: the group feels either too large for its arrangements, or not large enough to fully realize all the musical ideas.

Consider the tracks Settle Down and Same Drugs / Too Soon. Both spend around a minute adding a new voice part at consistent invervals until finally being sung by all. A large part of the background is a rhythmic bassline accented with unison patterns by members doubling parts in octaves. For the first two minutes or so, both arrangements sound like they should be performed by a quartet. Both tracks eventually get to a point where the rhythms and underlying chords are complex enough to merit the small army. However, it feels like there are a large number of unaddressed potential musical ideas in both songs' introductions that would have added some depth to the arrangements and could have been covered by single voices that were instead doubling up on parts.

Conversely, Bonus: Shape of You Remix almost feels like it needs another three to four members to fully cover all the necessary thoughts that are going into the arrangement. With a mashup this large, incorporating so many extra tracks in excess of the large number of musical ideas in Ed Sheeran's original song, the group is stretched and the song almost sounds thin despite what feels like fourteen separate parts. The track's sound isn't fully matching the group composition. The clothes look nice, but they don't fit properly.

Despite the little issues, there's one track I want to point out. House of the Rising Sun has a different feel from the rest of the album. The silence isn't forced. The reimagined bassline has some separation between the notes and is interesting as a standalone. When the extra voices come in, they introduce chords and rhythmic patterns that mirror the soloist and add further complexity. There is no good way to describe this song other than it is the best description of The Lost Keys. Keiji Ishiguri really outdid himself in arranging this and Jamie Serkin's solo is a perfect fit for the style of this song.

Overall, Latched has all the earmarks of what makes a good album, but still needs a few more tweaks in the group sound before becoming great. The group's sound is based around a patterned bassline accentuated by a number of chords and chorded rhythms, but The Lost Keys still need to work on fine tuning the style to match the group size. It's a challenge the group has proven possible to overcome, but isn't there quite yet.