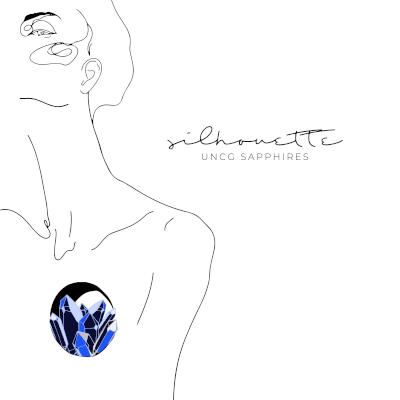 Is there any group other than the UNCG Sapphires that's known for assertive, edgy, sultry and ballsy pop-rock a cappella music in the female collegiate range? Okay, probably Men in Drag if you are current co-ed a cappella heads, or maybe Divisi or the USC Sirens if you are of a certain age (right Guang Ming?). But for at least the past decade these ladies have been at the forefront, crafting track after track of incredibly rich and intoxicating music. All of that hard work and artistry has finally coalesced into a tightly woven package of solid arrangements, facile musicianship and engaging soloists.

In regards to their debut disc Eve, I made the following opening statement:

With a nod to the obvious, the current princesses of collegiate rock a cappella — the University of North Carolina at Greensboro Sapphires — have named their debut disc Eve. They are looking to become the vanguard of hardcore female groups — brazenly aggressive and taking no prisoners. The group has made a name for itself during the past few years with the sole purpose of redefining the female collegiate a cappella idiom.

Princesses they are no longer, having ascended the throne to queens. The journey has not been an easy one, but over the course of three albums, the Sapphires have developed the vocal acumen to reach this destination.

With the proliferation of groups trying to make a name for themselves now, it's hard to rise above all of the noise, so while I don't think that there is a discernable "Sapphire sound" just yet, there is a lot of Sturm and Drang that listeners can get behind. I've called them an "angsty" group before, but no longer; their music has simply gotten more mature and evocative (ok, well El Tango de Roxanne is a lot, but taken from the cinematic source I give them a pass on that one). The bookends of the album are prime examples. Many Moons is a glorious dance track. With a fantastic arrangement by Nick Lyons that is both grounded and soaring, soloist Sarah Summers simply bursts from the speakers with an easy bravado much like Janelle Monae herself. On the other end of the spectrum comes The Bird and the Worm, a story song that sounds like something from Panic! at the Disco or Muse that puts a definitive end cap on the album. Other standouts include Center of Attention and Walk Away with a special nod to Caroline Polley's gutsy take on the Aguilera hit.

There are few missteps on Silhouette from my perspective, but there are a couple that tarnish the overall product. End of the World, while a great song on its own, seems woefully out of place on this album. The track seems to lack the grounded nature of the rest of the album. I'm not sure what that quality is, but it jumped out at me on the first listen and stayed with me on the umpteenth time. I hate doing the "one of these things..." idiom, but when it fits. The other is El Tango. The major issue with this track is that the first 3:30 minutes are a little difficult to listen to in comparison to the rest of the album. The spoken word at the beginning is just funny; I mean that happens, but the soloists begin to sound more forced as the song goes on whereas the backs are much smoother (and frankly more interesting). And then everything explodes and all is glorious again at the mark mentioned above, and then again at the 4-minute mark when the drums drop in. Those ninety seconds are worth the entire track.

The quibble of the moment though is interesting. Back in 2007, I remarked how disappointed I was that the Sapphires didn't include the original performing artists in their liner notes. A dozen years later and the argument still holds, only now it should be the songwriters. And since that is my major issue with Silhouette, I wish this could have published in June because as Stacey Keach says, "It has to be good."

We haven't heard the Sapphires ring RARB's doorbell in nine years. Silhouette fits snuggly into the current contemporary scene, and is certainly a compelling project. Whether you'll like it or love it, however, hinges on your studio production preferences.

What do today's Sapphires sound like? With this much engineering, I'm having a hard time answering that. I can hear that these songs come from strong source material, and that the soloists are personality-infused and ready to rock out, but the background vocal sections, and especially the bass and percussion, are altered well past their naturally achieving states. Many times, you'll just hear compressed tones; you can't tell the size or even the make-up of the ensemble if you drop in for a listen. My ears prefer more balance, especially given the talent of the leads, plus my own the desire for more aural distinction between tracks.

Perhaps you'll be plenty entertained by all of Nick Lyon's keen production abilities and won't mind one bit. As for me, after listening to this soundscape for five tracks, I was longing for something different — perhaps a shift into a simply sung folk song or a lighter ballad that could really highlight balance and blend. Enter El Tango de Roxanne, which like its name suggests, is neither a folk song or a ballad, but is totally cool and unexpected in the middle of Silhouette. Do you remember this evocative piece from Moulin Rouge? This fresh a cappella arrangement form is way more open, and the space showcases the strengths of the ensemble instead of designing a sound around these ladies. I'll return back to dance along often.

If you like booming finishes, hang on tight for The Bird and the Worm — there's going out with a bang, and then there's this. Silhouette is a labor of complicated, well-designed love and is definitely worth your time. Many tracks are cinematic in build and execution, and you'll especially dig all of this if you're into the big screen thrillers.

It takes about ten seconds of listening to this album to know what's great and what's terrible about Silhouette. This album is heavily produced. I've had many discussions about groups sounding like this, and I'm always torn deciding if I like this kind of music. I have always been a fan of pushing the limits of the human voice. I love seeing new chord structures implemented and utilizing odd vowel shapes or syllables to get the precise effect the arranger wants. However, when groups enter the studio, the element of the sound still being considered "human" can become very blurry depending on which digital effects are used. The Sapphires gave a phenomenal presentation, but the overproduction of Silhouette somewhat tarnishes what could be an almost flawless work.

So let's talk about the production of this album first. Nick Lyons is on both the arranging and/or production credits for all but one track on this album. It's very clear that some of Lyons' arranging choices were made with the intention of being recorded. Listen to some of the backing vocals on Many Moons. The bass part is doubled an octave down with partial distortion. The backing rhythmic patterns are accented in what might have been a glottal attack live, but are too uniform and digital to be fully human anymore. The sustained chords are so close to an instrumental tone that I can barely tell what vowel is actually intended. However, the effect is clearly present and very effective. This track is powerful, attention-grabbing, and unrelenting. This is everything I want in an opening number. I may not fully agree with the methods, but I will agree with the end result.

As the album continues forward, the overall style gradually shifts away from "in-your-face" to more haunting and ethereal. It's a welcome change. Lydia Davis gives a glorious performance in Lies that almost seems to float ominously throughout the track. El Tango de Roxanne is stylistically brilliant and thematically bold — it paints a perfect mental image of a beautiful dance becoming warped and twisted by the world around it. I can't even fully describe the music, but I have a full mental picture of it almost being sung by a witch to a couple dancing in a magic ball full of black smoke. If music is meant to give a mental picture to the audience, this track does it correctly. And End of the World is a pure and powerful pleading rock ballad that Samantha Saake delivers flawlessly.

As Silhouette wears on, it becomes clear to me that this album is intended to be more theatrical, but wound up slightly over-produced. The digital effects help to create all the little elements of sound that add to the big picture, but the style of the album isn't consistent enough to require that level of production. Thus, what winds up being the best part of this album is the soloists and whether or not the arrangement puts them in the best position to succeed — whether it's with haunting serenity, witchcraft, or a hopeful plea. It's hard to say whether the solution is to proceed forward with this production method and use all those effects to the group's advantage in the next album, or to dial back the production to allow for the group to feel more natural in the presentation, but the current layout tries to have the best of both worlds and winds up slightly off the mark on each.