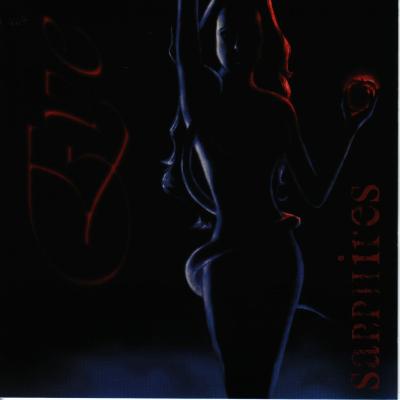 With a nod to the obvious, the current princesses of collegiate rock a cappella — the University of North Carolina at Greensboro Sapphires — have named their debut disc Eve. They are looking to become the vanguard of hardcore female groups — brazenly aggressive and taking no prisoners. The group has made a name for itself during the past few years with the sole purpose of redefining the female collegiate a cappella idiom. As the introductory haiku on their jacket sleeve has it: "Eve is just the start". And a good start it is. The Sapphires proffer a tantalizing selection of tracks to stake their claim on the Queendom of the southeast, before taking over the country and the rest of the world. They bring the full force to your speakers in all of their boisterous detail.

The songs are strong and often rugged, though sometimes it seems as if the ladies are singing with a chip on their collective shoulder — trying too hard to prove that they are more than "divas" or just a great girls' group — instead of letting the music speak for itself. But that just may be my impression from knowing what it's like to be misunderstood, feeling maligned and having something to prove. Just come to the realization that you might be better served by showcasing your strengths and letting the audience come around to you.

The middle of the album is near-perfection. Standouts include Fever, Nobody's Home and Hello. Each song epitomizes the divine trinity that makes the Sapphire sound. Fever is teasingly sexy, I was in love from the first "uhn." It's a simple arrangement by the exceptionally talented vocal percussionist Blair Baldwin. The ladies take it and wrap a lot of loveliness around it.

Nobody's Home is the best rock song on the album. Megan Sturgeon's solo has a bold quality that exemplifies the strength of their singers. The ability to tell a story in song is almost more important the ability to sing pretty and in tune. From the moment she opens her mouth, Sturgeon evokes power with her commanding presence. The melodic line of Hello is this mesmerizing ballad. The melodic line of Hello glides over the fantastic background arrangement — the "baby gurgles" kept me listening to the song on repeat.

None of the songs are bad and neither are the soloists; however, unfortunately, the soloists are also what's holding the album back from being exceptional. Rearranged doesn't gel for me as the soloist strains for a bit and the overall sound is a bit harsh. Numb loses a lot of musicality in the solo as well, where the last word of the phrase is clipped from either a lack of breath or a too quick tempo. Listen to "To be more like meh and be less like yeuh" as an example. The abrupt ending of Precious Things jars the listener and takes away from the total enjoyment of a stellar Tori Amos cover. Aerials would have made a better closing number.

Everyone should be jealous of Ms. Baldwin: not only is she one of the best collegiate percussionists working today, her arrangements are superb (she did eight of the ten on the album). Further, she possesses a heavenly solo voice. Even though it's an overdone Guster cover, I'd never heard a female version of Either Way. To classify this one as being angelic almost does a disservice to how truly awesome it is and to what Baldwin and the harmonist Kate Musselwhite are able to bring to the table.

Although the slate of producers/professional musicians associated with this crew is top-notch, so much about the album isn't: so much is unprofessional. The art design is a little shoddy, there's no contact information and the track listing is out of order on the inside. Above all — and I hate this — the group doesn't bother to acknowledge original artists. More thought must go into the packaging next time to make a truly superior product.

Aside from that little quibble, get this album now! Start the journey with these ladies, as they are on a fantastic journey to the upper echelons of collegiate a cappella.

The Sapphires tell you their mission upfront, haiku-style: "We're rather hard core / And we're here to break the mold. / Eve is just the start." It's easy to agree with their hardcore proclamation. Rearranged bursts from your speakers with seriously intense dynamics, and a crystal clear, front and center solo by Meg Lowther. Either Way is also a joy to listen to, because there's just so much to listen to. That song, along with many other fine arrangements like All You Wanted with its lively vocals and stunning suspensions, are attributed to the talented Blair Baldwin. And be sure to turn on the fan for Fever, the most eyebrow raising tune on Eve. Fever is built on a foundation of hot and heavy (but still pitched and sung) panting. It's risky, and it works.

With the exception of My December which features a weak soloist, everything sounds pretty darn good on Eve. However, the Sapphires' desire to "break the mold" didn't happen. Alt-rock aca albums are nothing new, and plenty of these artists (uncredited in the liner notes) get a fair amount of a cappella cover action in the collegiate scene. While all the Sapphires' selections stack up quite nicely into a tidy, high-quality album, the listener isn't treated to any completely fresh interpretations, new styles or sounds, or other noteable standout differences that would make Eve one of kind. Hello by Evanescence leans toward new horizons with its startlingly gorgeous soloist Hayley Carter placed against the sound of children laughing and stirring behind her. But Hello stands alone as a break-the-mold contender.

If the Sapphires wanted to move familiar artists into the experimental realm, they certainly have the talent to do so. Alternatively, their strong arranging style and excellent group sound would surely produce interesting originals.

The UNC Greensboro Sapphires have released an album with a pronounced dark streak with their rock-heavy Eve. But, although the album's ten tracks fit together nicely and seem to have been carefully selected to give Eve a discernible theme, the group lacks the requisite oomph and soloists to make these covers really shine.

When the Sapphires slow things down or opt for groove over sheer loudness in their source material, they are more successful. Take, for example, Either Way, perhaps the album's best track, with its beautiful open vowels and strong solo from arranger Blair Baldwin. Precious Things also stands out from pack, with its gripping dynamic changes heading into the chorus and another strong solo, this one delivered by Michelle Lampley.

Little else distinguishes itself on Eve. Arrangements are well crafted and exhibit care on the arrangers' parts to vary syllable choice. The only egregiously poor choices are the "wah wow" on All You Wanted and the "chung" of Aerials. The dominant "uh" on Fever exposes a few timing issues, but makes the arrangement unique among the otherwise homogenous bunch. The soloists may not rock out as much of the songs they were singing require them to, but none turn in especially poor performances. The same goes for the background vocals, which never quite convey the urgency or intensity demanded by the album's heavier tracks.

The production on Eve is nice, but in my eyes a little underdone. Unlike other groups that may try to mask their inadequacies with flashy techniques, the Sapphires really could've raised the bar with Eve with a little more on the production end. They have strong fundamentals, which studio techniques would have enhanced. On Eve, there were a few steps in the direction of a studio-driven production: the octavized second altos, the intros to Numb and Aerials, and the background of a screaming child on Hello. I could have stood more.

Apart from the liner notes, with their confusing and useless haikus and lack of crediting the original artist, Eve is a solid, albeit average effort. None of the tracks wedged itself into regular rotation on my iPod, so I likely won't be revisiting this album again anytime soon. I will remember Eve, though, for the potential the Sapphires have shown on it. With a few tweaks to their production, stronger solo efforts, and a quieter, mellower track selection, the Sapphires are poised to put out a great next album.