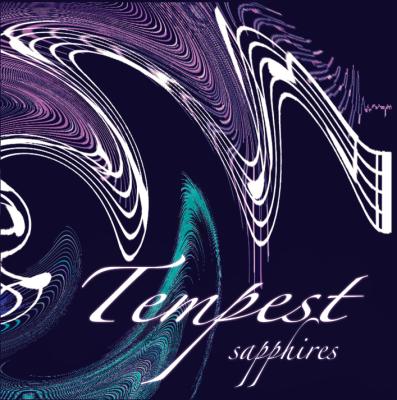 Continuing with the one word evocative title with ties to iconic females, the Sapphires from the University of Greensboro offer up an engaging and compassionate album titled Tempest. The ladies rip through some fantastic songs, delivering the goods on most of the tracks with vivacity and aplomb. The whole endeavor is supergroovy, but much like Last Call's Flair, there is a je ne sais quoi element missing, or in essence maybe too much of a similar good thing to make it unabashedly excellent.

Actually I can sum it up by saying that the replication of styles and sonic quality of the tracks makes it hard to be impressed by the goodness throughout. The first few tracks set a precedent that is hard to continue through the rest of the eleven tracks. By the time the second half of the album comes around, you begin to think, "Haven't I heard this song already?" There is a noticeable pattern in both arranging style and performance quality. The ballads are lilting and airy, the power pop numbers consist of driving background lines and kicking drums. The unfortunate repetition becomes a bit complacent.

This repetition is even evident in the track order. Existentialism on Prom Night and What I've Done was "unfortunately" flipped from when the finished liner notes were printed and the mastering of the disc. Not a big deal, as it happens in the professional world as well, but it can be jarring to expect this raucous Linkin Park cover and get the serenely emo Straylight Run song instead. But what it does do is put both of Kaitlin Carr's solos next to each other. Porcelain Fists and Existentialism on Prom Night do not vary much thematically or performance-wise in the hands of Carr.

All that being said, if the track list reflects a musical style that is your cup of tea, you'll be hard-pressed to find many faults with Tempest. The arrangements are interesting without being unnecessarily complex or gratuitous. The group is ever-closer to perfecting a signature sound. The ladies have a true mastery of their blend and balance. The ballads like Say (All I Need) are angelic and emotional. The uptempo numbers — like the almost-perfect opener A Place for My Head — are some of the most brazen and in-your-face tracks that I've heard this year.

Jill Clark gives one stellar vocal percussion performance after another. And the group takes a daring turn in eradicating any unnecessary percussion. On tracks Porcelain Fists and Colorblind, the rhythmic precision of the background singers more than makes up for the lack of dedicated drumming.

The soloists are nearly perfectly matched with their songs. Bekah Hilburn-Trenkle tears it up on the cover of Seal's Waiting for You, while the aforementioned Carr and Leigh Moser's turn on Say (All I Need) tug at the heart with reckless abandon.

Even though Tempest is a strong work, it doesn't cause a huge storm on the horizon, yet it's still enough to get you soaking wet and bandied about a bit. Get the album and enjoy the ride.

With not one, but two Linkin Park covers on Tempest, and the same type of ferociousness that their debut album Eve featured, you probably shouldn't give this Sapphires album to your sweet Gram-Grams. But if you're into powerful women who aren't afraid to show off their vocal muscles (and on Waiting for You, borrow the bass muscles of Kurt Sampson from Cadence), Tempest is a fine release for your collection.

Producer/Mixer Nick Lyons, who also happens to be the founder of the Sapphires, does an outstanding job on the auditory end. (It's only natural to work extra hard for your own.) My only quibble is that the soloist on Colorblind is too quiet; I understand the delicate mood required for this song, but we still have to clearly hear the lead vocal, yes? One common thread in the mixing treatment is a focus on nice ornamental soprano lines. Very floaty and flirty and fun, even when they're way up there in the stratosphere. There's a lot to listen to and appreciate on Tempest.

Soloists are all skilled and matched nicely with their songs. My personal favorite is Alicia Davis (Rush Together, Kill), who displays wonderful confidence without being overbearing. There's also something to be said for a female who can rap without sounding corny, and Louisa Hopkins sounds anything but on A Place for My Head.

The highlight track is certainly Say (All I Need). Get out your blanket for some serious chills; I could just faint when soloist Leigh Moser finally hits The Big Moment! But overall, there aren't any weak numbers on Tempest, which is a huge accomplishment for any group. The only downer is a mix-up of tracks: What I've Done and Existentialism on Prom Night play in reverse order on the album than what's listed in the liner notes. That's happening a lot lately in the collegiate scene. Seems a shame.

Tempest is another great work from the Sapphires. Buy it and enjoy!

The Sapphires of the University of North Carolina at Greensboro do several things very well; most notably, their background vocals are lovely. These ladies can tackle any of the lilting ballads on Tempest with ease; their voices ripple exquisitely on Mexico, they sway with subtle swells on Porcelain Fists, and they pulse delicately on Rush Together, driving the song forward. On just about every song, the backing voices have mastered slight dynamic changes that propel the music forward beautifully.

The problem for the Sapphires is that there's more to a cappella music than the backing voices. These ladies have made an unusual challenge for themselves: nine out of the ten songs on Tempest were originally sung by a male lead singer. This causes difficulties for many of the group's soloists, who sound as though they're scraping the bottoms of their ranges to hit the notes. I wish these songs had been transposed up just a few steps higher than the keys they used, just to put the soloists in more comfortable parts of their ranges (and, not coincidentally, to help their voices not get lost in the mix on those lower notes). On Mexico, the low notes are almost indiscernible (on the phrase, "all the way to Mexico", the "co" is too low and just gets lost). Similarly, the Kill solo would've carried more powerfully up a smidge higher.

So, when the ladies do hit the right key for the soloist, combined with their lovely backing arrangement, the result is exquisite. Porcelain Fists is a standout here, with Kaitlin Carr's lilting, lulling solo. (Not coincidentally, this is the one originally female song on the album.) Carr similarly nails the sweet and sensual Existentialism on Prom Night. And the ladies bump up the energy for the sultry, feisty Not Giving Up, where Jamie Zicko's solo has an entrancing pointed quality. The song makes for the best kind of album-closer: the kind that makes you want to hit rewind and listen to the song over and over again. That's the kind of magic that the Sapphires are clearly capable of, and what I wished they'd been able to nail on every song on Tempest.

Footnote: there is one guy on this album; Kurt Sampson of Cadence throws down a bass line on Waiting for You.

Online sales TBD soon. In the meantime, to order this album, email the group