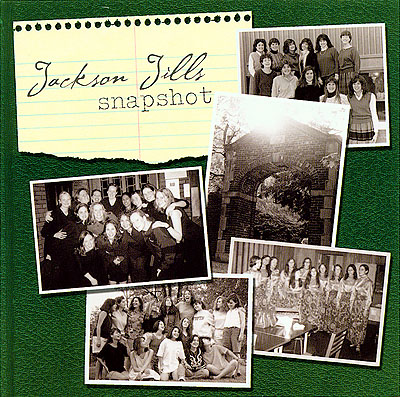 The Jackson Jills, of Tufts University, have put together a decent recording of pop cover tunes. The singing on this album is very good. The backups sound pretty full and reasonably lush. The soloists are very good as well.

Let us talk a little bit about guitar sounds and guitar solos in college a cappella recordings. I really feel that the "whaa-now" imitative guitar sounds of the nineties need to go. These might get a laugh out of your audiences who are, most likely, college students who have never really heard people sing these pop/rock songs without instruments. When you record these sounds, they just sound very very silly and ridiculous. Back in the nineties (up to maybe even 1996), these sounds were innovative. Well, guess what: not any more. There's got to be something better to do in those spots in the songs where the original BAND played a guitar solo. I hope there is something better to do there, because if I'm still hearing this stuff in 2010, I'm going to go jump off a cliff.

I was very happy with the vocal percussion on this album. For an all-female a cappella group, it sounded pretty natural in most parts. I loved it in Leavin' On a Jet Plane. Very dramatic and well done. This was, by far, my favorite track on the album. It was very thick sounding, very dramatic, and featured a great soloist. I also liked Spark. Very cool. When college groups cover Tori Amos, I almost always like the results. (Tori should tap into that somehow.) I really wanted a more energetic performance on the Eve 6 and 'N Sync tunes (Inside Out and Bye, Bye, Bye). They just didn't jump out at me like the originals did.

The production quality of this recording is very good. It's a clean sounding recording and well mixed. This is a very good collegiate, all-female, a cappella album. If you're looking for another one of these for your collection, I would recommend Snapshot, if just for track 15 alone.

My expectations were high for the Jackson Jills of Tufts University (the Fertile Crescent of college a cappella), the winners of the 1999 CARA for best female collegiate album. I am pleased to report that they did not disappoint. From the first song (I can't help but love a bunch of girls tearing up Sweet Child of Mine) to the last, the Jills have crafted an outstanding album that is taking a special place among my greatest hits of female a cappella.

I've already mentioned the opening track, and from there things only get better. Live's The Dolphin's Cry is a risky repertoire choice for women, but the Jills' daring is well rewarded here by an outstanding arrangement and accomplished soloist. Other highlights include the haunting Here With Me (featuring tasteful but uncredited vocal percussion), Jodi Shapiro chewing up Midnight Train to Georgia (well supported by her "Pips"), and the exquisite Rajashree Koppolu wringing every ounce of emotion out of Leavin' on a Jet Plane.

Unfortunately, two incarnations of the Jills appear on this album, with the '98-'99 Jills singing almost half the tracks at less than half the quality. But that's no matter, as the best stuff pulls the average way up.

It's well known that female groups can suffer from the lack of a bottom end, especially when covering bass-heavy contemporary songs. But while some groups solve that problem by overcoming it in the studio (hear the radio-ready Surreal by the USC Sirens), others do all the other stuff so well that you just forget about it. The Jackson Jills manage the latter achievement, and then some.

The Jackson Jills come to the table with a pretty impressive resume, sweeping the CARAs with their last two albums, Not Guilty and Raising Atlantis (both Best Album winners). Their track Bethlehem was one of my favorites off BOCA '99. So I definitely approached this disc with a lot of expectations.

Which is why I'm left kind of scratching my head. Snapshot is a bit all over the place; there is a bit of outstanding work, a lot of decent work, some OK work, and a few clunkers.

The Jills have a lot of things going for them. The traditional complaint about girls' groups is that the lack of bass, energy, and percussion makes them ineffective at covering anyone but Sarah McLachlan. But the Jills not only attack songs performed by men (8 out of the 15 tracks), they take on performers that would tax top-notch guys' groups (Guns 'n Roses, Live, Aerosmith). They approach this challenge using the kind of "bahr nahr" fake guitar syllables and edgy sound I normally associate with groups like the Tufts Beelzebubs. Sometimes this effect is kind of neat, but all too often it sounded a bit too silly. The Jills should be commended for their strong energy throughout the disc, though; it sounds like they're really enjoying what they're doing, which is always a plus.

There is generally decent solo work across the board, with a soulful standout performance by Marjorie Scheker on It Hurts So Bad. The arrangements are also generally fine and reasonably interesting, with the bulk of the work by music directors Anna Kupin and Liz Countryman. A surprise was a great interpretation of Jonatha Brooke's Crumbs contributed by Jills alumna and CARA Best Arrangement winner, Jamie Futterman. I would have liked to hear a stronger version of Here With Me (where's all that power the Jills showed on other tracks?) and really never want to hear a girls' group cover 'N Sync again. Eek. That being said, the Jills cover of Chantal Kreviazuk was fantastic — the harmonies really sparkled and the track was the only one which really hit the quality of Bethlehem.

The biggest problem with Snapshot was a general lack of variety. Despite a pretty varied set list, with everything from Dido to Eve 6, many of the arrangements sounded very similar. The Jills' edgy blend is unlike what you are used to with most girls' groups, but while it's cool on a few songs, I lost interest after a while. Additionally, too many of the solos on the disc were alto solos, either because the original soloist was an alto or because they're covering a guy song, further making the tracks blend together. College discs are doubly hard to make, because track selection has to take into account solo distribution and keeping people happy, but Snapshot would have been so much stronger if it had lost three or four songs. I wish I could have given this CD a 3.5. It's far from average (particularly for a girls' group), but it's just too spotty to get a higher rating and a permanent place in my CD collection.