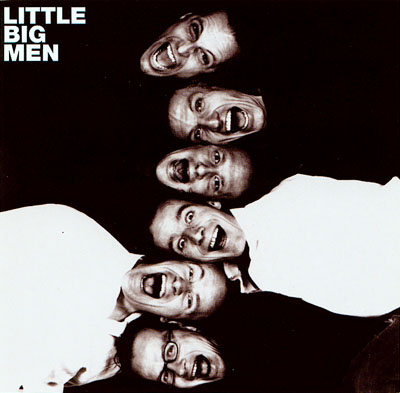 They're so cute! Little Big Men, a men's quintet from Switzerland, brings an adorable charisma to this self-titled album that transcends its otherwise average qualities. Their tuning has its moments, and their voices are fine, though not extraordinary. But just the same, fans of the classic contemporary a cappella sound will probably enjoy this album.

The Little Big Men sound hearkens back to an earlier era of a cappella, when it was still a fresh novelty and when standards of musicality had not reached their current levels. The group has a good blend and good enough tuning; it's not hard to believe that they have paying gigs and plenty of them. In the same vein, their repertoire seems a little dated to me, but clearly not to them. Since the singers themselves are having so much fun, listeners can get swept up in the tone.

Italian Shoes was my favorite track. It features a spirited percussion line, unlike much of the disc, and the song has a straight-forward, rock-and-roll drive that sets it above the rest of the material. Scattered is another tune with rock sensibilities, and seems to be one of their more technical successes on the album. I also got a kick out of their energetic rendition of Bob Marley's Soul Shakedown Party. European Marley covers are almost inevitably square, but the Little Big Men version has a swing of its own, even if it bears no resemblance to reggae.

Energy carries It's All Over Now past its tuning problems into an enjoyable after-the-breakup number. Less successful is the Crosby-Stills-Whoever As I Come of Age, which affords too few rhythmic opportunities to make up for its spotty musicality. Likewise, turning Ray Charles' Leave My Woman Alone into a white-boy doo-wop number was a little much for me. I did enjoy their off-beat intro to Hazy Shade of Winter, but their rendition quickly devolved into a straight-up, rushed version that fits right in with the other 200 a cappella covers of this song.

The six Little Big Men sing mostly in phonetically memorized English. It's adorable, especially because they have such cute accents in the opening track, We've Been Waiting, which presumably was written just for them without an American pop star to mimic. If this is your genre, this is your album. If not, skip it and wait for the live show to come your way.

An album design that features men's legs all over the place isn't my idea of artistic beauty. Looking past the incongruously placed male anatomy in the album design, I found myself rooting for these guys. They sing with such an honest sound, with such an unsullied vigorous life in their music, that you can't help but pull for these guys. Unfortunately my desire, excitement, and support weren't enough to save this project.

The album opens with We've Been Waiting, a cute "hello" from the group, performed with spiritual brightness, and a keen sense of musicianship and style. I was hoping for the album to go up from this point, but sadly it fell into the dark world of the dreaded intonation monster.

While the Knudsen Brothers have had success with their method, most groups don't have this luxury and must rely on singing experience to create flawless blend throughout the parts. Little Big Men have six very distinct, unpolished voices that cause serious blending, and thus, intonation issues, in many of the tracks.

The other major vocal flaw that I found with this project was that the group tended to fall off the end of notes. Failure to hold through the notes led to a magnification of the intonation concerns I talked about earlier.

I don't mean to be picky, but some dynamics here and there would've been appropriate.

This album does have some redeeming qualities. The soloist on Shop Around was great! There was one minor issue when he sang a roll on the words "bride" and "around" using an "h" sound ("briiii-hiiide") ("arooou-hooound"), but stylistically flawless other than that. The group's entrance on Leave My Woman Alone, an old Ray Charles jam, made me want to stomp my feet and dance along.

Little Big Men came up short with this effort. More attention is needed to basic vocal techniques prior to entering a studio again. The other side of the card is that they need to expand and take more studio risks as well. This is a nice souvenir for an audience member at a show, but not much more than that.

When reading or listening to music, the first thing most people notice is the pitches of the notes. On this album it was definitely what I noticed first. On their self-titled CD, the European group Little Big Men have definite problems singing accurate pitches. In almost every cut, there is at least one major section that has tuning problems — notes sung too high or too low. These are not pitches that are musically shaded for effect. They are pitches necessary to communicate the sound of the song. Italian Shoes has problems with the bass intro. The soloist spends the duration of the song looking for the right notes. The background singers are all over the scale. The same can be said for It's All Over Now. In Gelato al Limon each of the background parts hits above and below where it should be, leaving the soloist to struggle for himself.

The second thing listeners notice is the musicality of the tunes. This includes the use of a full dynamic range, rhythm changes, and vocal effects. Most, if not all, of the songs on this CD are sung fortissimo or louder. Most of the rhythms, once set by the background singers or vocal percussionist, never change. Because of the tuning problems, the listener is never sure if what they just heard was a deliberate stylistic effect or not.

For all the problems I had with tonality and musical creativity, I did like the energy level that was presented on the CD. It is my feeling that this group is very good in person, where the room acoustics will cover some of the pitch problems and the audience is are left with the abundance of energy coming over the footlights. Listening to the Little Big Men sing on the CD makes me want to see them in person. I think I would enjoy the live presentation.

But since this is a CD, and CDs are listened to over and over and over, I must judge Little Big Men on what I have heard. Repeated playing has given me too many chances to examine the vocal problems and missed musical opportunities. I don't think this CD will come out of the case very often, if ever.

For ordering details, see the Little Big Men web site, or write to them at