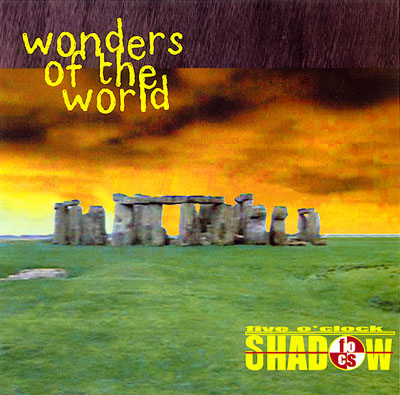 Once you reach a certain level, it's no longer enough that a cappella music can stand up to its instrumental counterparts.

So what if it the singers are proficient enough to sound just like guitars and drums? It's been done. Now the challenge is to make music, which is what instruments are for in the first place.

With a core band sound and a stable lineup of talented a cappella veterans, Five O'Clock Shadow has two legs up on most of the contemporary all-vocal upstart groups. The newest FOCS CD, Wonders of the World, sounds like they think that's the entire goal. And what have they done with this accomplishment? Put together a collection of repetitive, banal songs with "vocal guitars" that have been processed enough to take the vocalese almost out of the equation.

This music isn't catchy enough to get away with lyrics like "These are the images I see when we kiss" repeated ten times, or "You're 29 - it's pretty cool" ad nauseum. The vocal-guitar solos are neat, but they don't hold a candle to the vocal-guitar music that was coming out of Vox One, the defunct Boston jazz group that included current FOCS member Paul Pampinella. I want more music in my music, more art or groove or poetry or something.

The instrumental (uh, no lyrics) Interlude #3 was the only cut I particularly wanted to hear again. Images was almost catchy and Wonders of the World will find a following among fans of '80s Yes. What's It All About didn't grab me the first time they recorded it and doesn't seem to have grown any here. The RARB rating system asks for a certain level of technical objectivity, and technically these guys are great. But they are too hollow to win raves from me.

If somebody has to become a pop star with uninteresting music, I'd rather it were FOCS than some idiots who play the same sort of musical lint on guitars and a drum set. But I'd rather listen to something else entirely.

One of the most interesting stories in the a cappella world in the past year or so has been the reinvention of Five O'Clock Shadow. Always prone to minor lineup changes, the latest incarnation has made a hard push to actually be the "vocal band" that everyone talks about. Wonders of the World rocks hard, and does so in a fresh way that you have not heard before. If you like your a cappella pure and clean, steer clear; this is the most plugged-in, distorted, effects-laden CD out there. And yet it's somehow as "mainstream" as anything that's come before.

The sound took a while to grow on me. At first listen, it was hard to escape the feeling that FOCS was "cheating" by using all the electronics, and that the album was more about the novelty of it all than anything else. I was always a big fan of their older work, which was marked by full vocal chords, energetic rhythms, and intricate and varied VP. The change in direction for the group was a little jarring at first. This feeling was not helped by their decision to remake their CARA-winning song What's It All About from previous album So There. A wonderful song, its inclusion forced me to compare the new sound to the old, and the new came up wanting. Granted, any change to an old favorite will generally be perceived as a detraction; still, the song worked best in the style for which it was written.

The good news is that even a diehard fan of the old like myself was able to get past it. After a couple of trips around the CD player, I realized what it is that has always made FOCS a great group: their clever and daring songwriting and their sincere energy and passion for the music, not to mention their high level of talent. These guys know how to rock, and you can feel how much they love to do it. Wonders of the World is full of the kind of songs that make you start to dance in your seat at work, that call your mind back to distant lovers, and that make you feel like there are people out there who share your quirks and trials and are still pretty cool. Inside Her Mouth, despite the audacious title, is a relatively tame (but bouncy) number about self-examination, and it's my favorite cut on the album. Fleshing the disc out are the romantic rockers Few and Far Between and Promise You This, both of which will find a way to apply to someone in your life. The challengingly philosophical title track shows up twice, once in full-on plugged rock mode, and again at the end, buried at track 29 after a slew of annoying 3-second tracks of silence. The remix is worth the wait, though. It strikes a nice balance between the new rock vision and the old vocal harmony. I'm Right is clever and smart-alecky without offending, and catchy to boot.

The album features three Interludes, the first two of which feel more like extended intros to the songs they precede; I didn't feel like they deserved their own tracks. The third is remarkable in that it is a 3:47 "instrumental" a cappella track (no lyrics) that manages to be only slightly too long. Still, all three are excellent demonstrations of just how much time the engineers and singers have spent in the studio figuring out new ways to make the voice evoke the same visceral goosebumps as an electric guitar. Mix it all in with a few more solid tracks, wrap it up in a very cool (and appropriate) cover design, and slap on a slick new logo, and you have one of the most exciting new albums in a cappella.

The drawback of the new rock sound is that it's a little less suited to some of the talents in the group. David "Stack" Stackhouse, vocal bass and VP, has been a big part of FOCS' makeover, lending his considerable talents on both sides of the mic. His library of percussion sounds is not as varied or as full as some of the other top-notch mouth drummers out there, but he makes up for it with incredible control and precision, which makes him well-suited to the rock band sound. Some of the soloists are not so lucky; several of them have an inherent sweetness to their sound that shines through brilliantly, but doesn't quite match up with the edge and grit of the backup parts on a few of the songs (particularly the What's It All About remake and the non-bonus version of Wonders of the World).

But overall? Wow. I'm amazed by what these five guys do on this album. It's full, it's original, it's exciting, it's emotional, it's coherent... it's a great CD. Vocal purists will probably not be impressed, and old-school fans of the group may take a while to warm to the new groove. But everyone should give this album a try. Five O'Clock Shadow has aimed high, and succeeded in becoming one of the wonders of the a cappella world.

Many vocal bands have realistic-sounding percussion and bass, but it is FOCS' near-constant use of guitar-like effects on the upper voices that sets their sound apart from other vocal bands. Organ, wah and distorted guitar grace nearly every track. The result is a wall of sound, and an edgy one at that.

But this is superficial stuff; effects for effects' sake are a gimmick. And an album's worth is a one trick pony. What allows Wonders of the World to transcend this trap is simple: great leads plus great writing equals great music, no matter how you dress it up. FOCS' songs are catchy and rockin'. That's why they are a rock band — they don't just play one on TV.

But, in the midst of this parade, I have a few gripes. FOCS makes use of autotune. Liberal use. Exceedingly liberal use. The result is something between perfect intonation (desirable) and robotic intonation (presumably not desirable — unless you're doing that Cher Believe thing). Now, not to burst any bubbles, but few artists release recordings that aren't autotuned, so FOCS is in the near-universal majority there. But the devil is in the details. Stripping away all intonation variables leaves the listener with an artificial sound. This works just fine on processed backup "organ" or "guitar". On leads, too much autotune can suck the believability right out of a track.

All in all, Wonders of the World is a great CD. FOCS has established a signature sound that's sure to turn a few heads. I highly recommend it to contemporary fans who want to see where the boundaries of a cappella are.