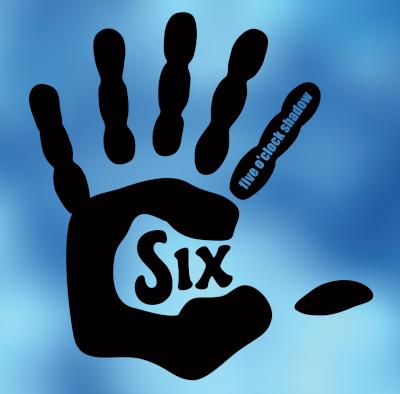 Five O'Clock Shadow is a great band in perpetual search of a hit. I like this new album the group made. Good singing! Writing their own songs! But I don't come away humming any of it. Maybe Grocery Store, a mid-tempo tune by Paul and Julie Pampinella with Oren Malka and Caleb Wheldon, which reminds me of David Wilcox or Never Die Young-era James Taylor.

It's a nice album, there's just not enough pop in this pop to win my eternal love. That's been my thing with this group for ages, so I guess the reunion disc shows they haven't lost a step. The tunes are tight, the production deliberate and I love that they write their own material. At the same time — quick, name a Five O'Clock Shadow song you remember from the past! I came up with What's It All About, which has a pretty good hook but I can't say I remember the rest of it.

Six does have plenty of charm though. I warmed to it much faster than I have to previous discs and I found it much less pretentious, in the sense that they seem much happier to be who they are instead of trying to bust out and conquer the world. Maybe I'm more like that too, so aging has brought us into a closer wavelength. Also I am more aware of how hard it is to write and produce your own material, whether anyone else relates to it or not. Twenty years of cover bands makes me ever more grateful for songwriting.

Like You Do is a fun romp of a rocker, like something you might have heard from Green Day or Weezer not so very long ago. Not The Rightest is more guitar-driven, in an a cappella way. I like its tempo changes and shifts in and out of distortion, though I never really warmed up to the tune. Nobody's Waiting is an '80s ballad with a Coldplay-like intro that doesn't get as far as the others.

But this album is comfortable in its own skin. It closes with a cover of Hip to Be Square, a performance that is both excellent and on-target. Five O'Clock Shadow is both hip and square, and I'm happy to see them back on the scene.

It's been a little while since we've heard from Five O'Clock Shadow. The Boston-based vocal band was fairly prolific throughout the 1990s and early 2000s, but the sextet's EP Six is its first release since 2001's Wonders of the World. The group stays true to its reputation, though, delivering five polished, catchy tunes here, four of which are originals (one of which was written by former FOCS beatbasser David "Stack" Stackhouse; the other three are written/co-written by current members of the group and one group member's wife).

If FOCS had instruments, they'd be a power pop band like Fountains of Wayne or the Click Five. And, in fact, it's sometimes hard to remember that they don't use instruments, because there are some liberal studio effects here that make voices sound like synths and guitars, especially on the first two tracks.

That sound and songwriting style will dictate a listener's enjoyment of these songs: FOCS has a lot of energy, and there are a lot of power-pop harmonies and backup vocals here which make these songs fun to listen to but ultimately a little repetitive and predictable. Their songwriting style just doesn't click with me on Grocery Store, which is some sort of allegory for religion and grocery stores whose lyrics I find awkward and tedious. In addition, there are some weird tracking choices on this EP; it's bizarre to hear the "I couldn't live without you" song Like You Do immediately followed by the "I'm fine on my own" tune Not The Rightest.

I like the group's sound better when it gets a little mellower and more natural, especially the song Nobody's Waiting, but overall their songwriting style isn't really my favorite. Still, FOCS has a polished sound on Six, and it is nice to see a group writing originals (and picking a cover that fits well with the group's own aesthetic).

Now that's what I call rock and roll. Five O'Clock Shadow (FOCS) channels the sound of the '80s with feel-good melodies backed by a steady beat and heavily filtered pads. Sometimes their creative stylings are spot-on delightful, other times the charade just sounds old hat. Six is one of the more technical, professional collections you could rock out to, though whether it makes you want to rock out is another matter entirely.

The five songs on the EP, four of which are original compositions by FOCS and affiliates, showcase the range of tricks the group has up its sleeves. Like You Do is a straight-ahead rocker that sets the tone for aggressive production and intricate arranging. The standout for songwriting is Grocery Store, which cleverly weaves an introspective soliloquy out of playful grocery store verbiage. Of all the instrumental imitations throughout, the vocal guitar solo in Not the Rightest is the one written and performed to true metal-shredding virtuoso caliber. Nobody's Waiting is a laid back ballad that rounds out the pacing of the originals on the EP. Hip to Be Square is the only cover, a faithful recreation of the spunky greaser shades hit by Huey Lewis and the News that wraps up the EP with a punch. In their 20 years of performing, FOCS have perfected the art of complementing arrangements and production for a convincing rock and roll experience.

As much as FOCS has evolved over the past 20 years, their taste has not. While I can appreciate the skill and enthusiasm that went into Six, I have a lot of trouble connecting with the music . The insistence on putting a snare on every other beat, and constantly returning to straight eighth note "jin-jin" strums, flattens the dynamic variation suggested in the arrangements. The soloists are thin and generic, singing lyrics like "ask my father and I'm sure he'll tell you that you're just like my mom" that make you wonder if they have anything worth singing about at all. It's music that would have been fresh in the '80s alongside Eddie Money and the J. Geils Band, but now it just comes across as simplistic and jaded.

FOCS has been a driving force for the contemporary a cappella scene. Their innovation with filters on stage and in the studio have helped popularize vocal music and expand the range of possibilities in arrangements and production. With Six I worry that they have started to stagnate. Now that any group with a decent budget can recreate guitars, organs, and drum kits, FOCS needs to be willing to take bigger risks with their themes, arrangements, and soloists. What we get in Six is an immaculate display of skill and attentiveness to detail, but not really any surprises or showstopper performances. So if you'd rather take a break from the adventurous for new takes on a familiar sound, pick up Six and rock.