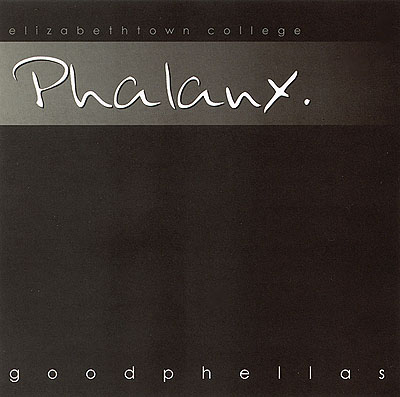 Phalanx has obviously studied their craft since their last album, Vision, which I reviewed (kind of harshly). Wow. True to my suggestion (not that I'm taking credit or anything) to "work as hard on all your songs as you did on With or Without You", Phalanx's very short album Goodphellas is a study in craftsmanship. You can hear just how much work went into the recording and mixing of this album. On top of the wonderful production, they have the best single-page liner notes I've seen yet. Stylish, sleek, and simple (while giving credit to original songwriters! yeah!), this album should be an inspiration to all college groups recording on a budget.

First, Adam Halpin is a gorgeous soloist — and it doesn't bother me one bit that he has two solos on an album with only six songs. I have always been a sucker for a guy with a fabulous vibrato — especially the type that's full and rich and quick. CARA-winning arranger (and fellow RARB reviewer) Jonathan Sears arranges most of the songs in a richly textured style that gives each track enough interest without detracting from the melody. Both background singing and vocal percussion (all by Adam Brophy) are very strong throughout Goodphellas, and minus a very strange kind of "oomp-a-loomp-a" dance break at the end of Rhythm Divine, there is nary a "cringe moment" in this album. Of special note is the opening track, Where You Are, which was written and arranged by Jonathan Sears and again, beautifully sung by Adam Halpin. (On their web site, it says that Halpin wants to be in a boy band. He should get an agent.)

Phalanx is the first college a cappella group I've heard perform Mr. Roboto, and they do not skimp on the full capabilities of digital recording arts today. The song is a monument to the '80s Styx cover, replete with computerized effects that bring you back to the days when you wore fluorescent pink socks and tapered jeans. Also memorable is the solo work of Joe Anzuena, who also performs the lead vocals on two tracks (The Freshmen and Slide).

For those of you who enjoy contemporary collegiate a cappella, this short but sweet disc is definitely for you. Bravo to Phalanx for pushing themselves to excel; now there's proof that where there's a will, there's a way. If only other college a cappella groups believed in themselves the way that Phalanx did while making this album.

This album was hard to review because I wasn't sure exactly where the group was going with it. Did they want to sound like a good college group, or an average semi-pro group? Since they're a college group, I went with the former.

First, I'd like to mention the use of the studio as an added member of the group. Phalanx seems to use every device possible here. From simple reverb, to over-dubbing, to octave pedals, and everything in between, you can hear it. Now, for me to notice the blatant use of equipment, it must be obvious, and at times distracting. This is what made me feel like this group was trying to be more than it actually is.

I then tried to imagine the arrangements without the effects, and they were not impressive. What bothered me the most was the choice of syllables. I couldn't really tell if it was the particular voice that was singing, or the arranger's choice, but the background often stuck out and took away from the end product. It's tough to truly enjoy a song when all you can hear is a nasally open /a/ sound permeating from the background.

Now, you might be asking yourself, if I disliked this CD so much, why did I give it a 4? While this isn't a disc that I would play all the time, it is still a good album. The group really does sound good, and the effects sometimes add to the arrangement rather than always being distracting. Also, this album doesn't have the pitch problems and total lack of energy that most college CDs that I get have. The soloists (except for the one on Either Way, which could just be a personal thing because I know the song so well) are also excellent.

I would call this album a second tier collegiate a cappella album. It's not one that everyone should go out and get right away, but if you can't find anything else, give this one a shot.

Phalanx deserves praise for many things. Creative arrangements. Drastically improved tuning. More accurate and realistic vocal percussion. Improved solos. This is simply a better group. What's the secret? Fewer tracks. Fewer tracks means greater attention lavished on each track. For Phalanx, it's a big payoff. Many other groups could benefit from this model.

Phalanx songs are not just recorded, they are compiled. The best takes are spliced together. Tracks are placed in a stereo spectrum. Percussion is sampled, cut and pasted. Phalanx takes fine advantage of the fact that a studio recording offers enormous mixing flexibility. The result is a CD to be proud of. Had these same performances been recorded live, I fear we would have had a seriously sub par recording.

The production here tastefully fades what should be faded. Phalanx brings their best qualities to the table. Any fan of this group should be delighted with this release.

Now down to the more subjective elements. The Freshman has been done to death. Although this particular rendition holds its own against others, it doesn't take us anywhere new and should probably have been replaced with something a little more creative. It was probably included due to the strength of the lead. And it is well sung, but the song still suffers from its ubiquitousness.

The break section in All I Need is a little inauthentic and perhaps even inappropriate. The husky voices sound a little more like teenage prank callers than funk-masters.

Overall this is a strong effort from a group whose talent is still developing. It's great to hear a group capture their best.

To order, send $10 per CD (checks made payable to Elizabethtown College) to