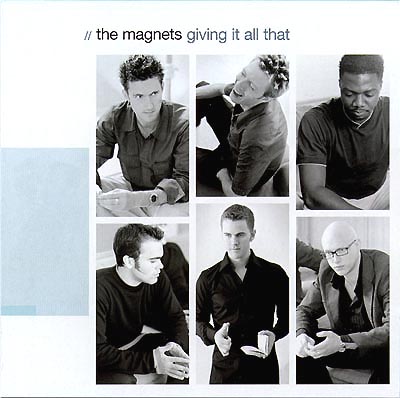 I've had the pleasure of reviewing many albums for RARB so far, and this one has to be one of the best that I've heard.

The sound is perfect: tight harmonies, precise volume levels, nice use of effects, and tons of energy. These guys have spent a lot of time and effort to make this disc, and it really paid off. Each track has smooth backgrounds and kicking vocal percussion. I really hate to say this, and it's meant to be a compliment, but if a group like 'N Sync got a vocal percussionist and dropped the instruments, they would sound like The Magnets. This is the direction that pop music needs to go in, and this group should be proud of this recording.

This album is in no way perfect, but the faults are minor at best. I found myself more into the covers than the originals. The originals all seem to fall into the Boy Band Ballad mold: simple background, slower beat, intense soloist. While these tracks were still good, I found myself easily bored and wanting to press the advance button to hear the next song.

I was also unimpressed with the drum solo on the first first track. I have a theory that drum solos are like comedy: save it for the concert. Vocal percussion can easily be played with and overdubbed in a studio, which almost takes away the validity of a recorded solo. It's much more impressive to see someone do it live than to listen to a recording. Also, to someone that has listened to as many a cappella CDs as I have, it's nothing new. Maybe for someone new to this "world" it's something special, but it did nothing for me.

I highly recommend this album to anyone looking for a new group to listen to. Sometimes you might be afraid to buy an album from a group you've never heard of (I had never heard of these guys before this review), but fear not with The Magnets. You'll be getting your money's worth.

When I first received Giving It All That by The Magnets in the mail, my first impression was, "The Magnets? Who the hell are these guys? They can't be any good with a name like the Magnets.". After listening to their project, I began to care less about their name, because this group, with the release of Giving It All That, has presented to the a cappella world the finest display of studio production on an a cappella album, ever.

Every track on this album simply shines. Gripping emotion, seamless blend, and powerful production across the board. Soloists don't stand out over each other, but all soloists handle their respective songs with style and a certain level of sultry musicianship.

Right out of the United Kingdom (except for one guy from Jersey), these six men have captured the art of recording an a cappella project in studio. That being said, this album was obviously not created solely for the a cappella market. These guys have bigger goals in mind, evident from the apparent money and hours spent on recording the sound on this album.

So you're curious about the standout tracks on the album? Well, they're actually all standout tracks, but Walk Away and All the Wrong Reasons were my two personal favorites. All of the arrangements of cover songs are spot on, and the writing of the original songs keeps the flow between the covers and originals smooth. Actually, if you don't read the liner notes, or have advanced knowledge of certain songs, you can't possibly tell the original songs apart from the cover songs.

The vocal percussion is simply spectacular. Innovative beats, precise rhythms, and an opening track solo that sets the tone for this ground-breaking project.

It's nice to see that our friends across the pond have finally given us something besides Guinness to be excited about. The Magnets have released an album that could conceivably change the way that a cappella is viewed by the general public in years to come. If you don't buy this album, get your head checked, because you're bordering on insanity. Even if you're an a cappella purist who doesn't like all the fancy effects and studio work, just by listening to this album you will truly appreciate all the talent and hard work that went into this project.

I was alone when the postman brought the Magnets' CD, Giving It All That. Open the package. Into the CD Player. Play.

The first cut was a vocal percussion piece that was very good. It finished. I walked into another part of the house. The second cut begins. I thought, "Oh, man. Another group that doesn't understand that a cappella means `no instruments'. Gotta whack 'em...".

I sat down and began to listen. This group is very good. VERY, VERY GOOD.

And so began my review of The Magnets' album Giving It All That.

These guys, a "man-band" from England, recently signed a six-CD contract with EMI. This is their first effort. It is a combination of excellent vocalists, superb arrangements, and a production staff that knows how to electronically massage vocal sounds in many, many mysterious ways. Which leads to my only question about the CD: when does a collection of modified / enhanced / (your words here) vocal sounds step over the line from a cappella to something else? Don't take this as a negative statement about the album — what they have produced is a remarkable musical product. But after you buy the CD, ponder this question.

Other than the query above, there is not much negative that can be said about the Magnets' CD. At times I mumbled to myself, "you're nit-picking to find problems", and I was. They have a wonderful product. They sing incredibly in tune. The relationship between the background and soloist is exactly where it needs to be. The vocal percussion is so smooth that you almost don't notice that it's there. This is a very good work.

There are many good cuts, but my favorite has to be The Art of Love. The soloist's voice has an edge of pain. The background vocalists respond to the appeal. Starting with only a meek soloist and vocal percussion, the group builds toward the end where the ensemble pleads for an end to the suffering of love. It is very moving.

On the other hand, if you want a couple of songs to exclude from your play list, they are at the very end of the CD: cuts 13-14. They lack the intensity of the other twelve. The lyrics are repetitive. The songs drag on beyond their natural ends. But remember, these two songs are compared to twelve others that are very good. For other groups these would be good songs. They just don't measure up in this context.

Bottom line: The Magnets have some great arrangements and these guys have the vocal talent to make the most of those arrangements. Buy this album and enjoy it for a long time.

CDs may be purchased from Tower Records, Amazon, CD Now Mainely A Cappella, and Primarily A Cappella.