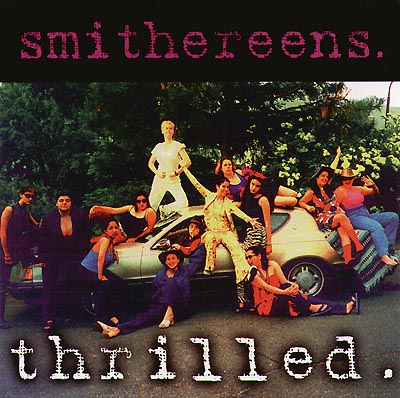 I clicked with The Smithereens. It started with the good vibes I got from the frank, sexy, butch-femme look of the liner notes. Then their sound followed through — an uncluttered, smooth timbre that managed to be feminine while avoiding all traces of girly.

This album had pacing, always a pleasant find in a cappella-land. It didn't particularly rock or groove, let alone wail. But it gelled, which is a commodity in its own right. The opening track, a post-disco take on Movin' On Up, had a nice feel and a good forward momentum, along with a very pleasant and somewhat sexy solo. The song set the tone for the album, making it sound inviting and approachable.

The arrangements are on the spare side of the busy-pop-transcription approach. The bass lines are resonant but a bit simplistic, as is common for women's groups. However, The Smithereens do a good job avoiding shrill or over-vibratoed pitfalls, and they have a nice repertoire of little rhythmic touches sprinkled throughout to keep things from getting too square. All the solos are easy on the ears, some surprisingly so — one of the For the Longest Time soloists brings a Shawn Colvin-like touch that caught my ear all the more because of its presence in such a chestnut of a song.

Mummer's Dance is The Smithereens at their best — the song suits their style, and they in turn elevate it above its usual cute-little-Renaissancey rut. The arrangement is a bit fuller and more polished than the rest of the album, the solo had just the right touch, and the song moved quite nicely. I also enjoyed Baba Yeh, more for its flavor than its polish, although The Smithereens' treatment is not a difficult listen.

With Thrilled, The Smithereens have come a fair ways from the last album they sent to RARB, the offbeat Shake Gently Before Enjoying. They have grown into themselves and put together a nice sound, and I look forward to hearing more.

RARB reviews have two audiences: potential fans and group members. We try to provide customers a good idea of what to expect so they can make an informed purchasing decision, and we try to provide groups with a constructive criticism so they can have a better idea of what works and what needs work. If you're reading this review because you're considering buying Thrilled, please don't read my review. Seriously. I'm not kidding about this.

Okay, if you're actually IN the Smithereens, read on. I asked everyone who's not a Smithereen to leave because what I have to say about Thrilled is probably best kept between us.

RARB was a bit different the last time The Smithereens sent a disc to us. Reviews were posted anonymously. Just so you know, I was reviewer number 4. At the time, I found Shake Gently Before Enjoying to be embarrassingly lifeless. Even after all this time, I vividly recall an emotionless version of Why. Despite the fact that Shake was a notably weak album, I was still looking forward to hearing Thrilled. I remember that you had a good sense of humor on Shake and that led me to believe that you had potential. I figured you've had a lot of time to grow since then. Well, you have grown. Thrilled is a lot better than Shake. There's nothing quite as leaden as Why, but overall Thrilled is still very lifeless. I'm sure the other reviewers are going to bust your chops on tuning issues, but the number one problem is energy. There are moments on Thrilled when you seem to be trying for a laid-back sound, and it works in a way. But the nice cooing quality of, say, Can't Take My Eyes Off of You, isn't very effective unless it's got some rock-solid vocals to play off of. When you put a laid-back vocal next to a lifeless vocal, the laid-back portion sounds lifeless by association. Thrilled keeps me longing for some bold, energetic performances.

I've noticed that a lot of contemporary female collegiate a cappella groups seem to have started in reaction to an all-male group. They sound like they're trying to show some arrogant boys that girls can rock every bit as much as they can. That attitude has its problems (it causes some female groups to try to imitate the strengths of male groups instead of playing to the strengths of female voices), but it has an upside too: there's a healthy sense of competition. It's good to know what's out there. (Back when I went to school there was only one male group on campus. They only had four members. I thought they were pretty bad, but most people on campus didn't know better and thought they rocked. The student body didn't have much to compare them to. Until one day The Beelzebubs came to sing on campus. The Bubs blew the audience away.) My advice to you would be to measure yourself up to the competition out there. Have a rehearsal where you just listen to tracks from The Amalgamates' Juice and Off the Beat albums. Listen to Wild Horses or Beautiful People (off of Tribulation) and hear how much power they get from simple arrangements. Listen to how hard they punch those notes.

I'd also recommend you have a rehearsal where you don't bring any sheet music. Just bring the lyrics to songs like Roam by the B-52s, I Want To Be Sedated by The Ramones, and Birdhouse in Your Soul by They Might Be Giants. Anything fun, fast, and musically a little bit obnoxious. Then start singing with everybody on the lead vocals. Screw tuning. Just sing it loud and sing it fast. Sing like you're singing to somebody halfway across campus. Memorize the words to Baby Got Back so that whenever two or more Smithereens are within shouting distance you can yell it at each other. Just do anything to get the energy levels through the roof. Nothing else really matters.

I know you have some energetic performances within you. I can hear it peek through when the lead vocalist does her spoken and spontaneous intro to the hidden bonus track. ("Should I start? Okay!") Listen to how lively her voice is. The whole album needs be like that. This is going to sound weird, but listen to the burp that ends the album. That's a great burp. It's bold, brave, and resonant. It's not just a little burp: it's a BELCH. That's what the album needs to sound like. Instead it too often sounds like the carnival music slowly winding down.

There are a few nice things to say about the album. Beautiful Stranger wasn't very lively, but the much revered OTB screwed up the same song and came out with a version that was joyless. You at least seem to understand that the song is supposed to be fun. Also, there have been a ton of covers of Mummer's Dance that all make the same mistake. They all feature an imitative solo that end up being thin and unengaging. They often tend to disappear into the backing vocals. On your version, your soloist stays truer to her own voice and as a result, especially on the first verse, she stands out from the music. Finally, I think tuning problems hurt Veering from the Wave, but it gets off to a good start, has a nice soloist, and most importantly, it's an original song choice. Fresh song choices are always a good idea in and of themselves, plus singing Jennifer Kimball is a clear indicator that you're picking songs not because you think they're popular, but rather because you like them. Good for you.

Thrilled may not be the best title for the newest CD from the Smithereens. The group seems too cautious to let their energy loose. If they're thrilled, they do a good job hiding it. The problem gets weirder when they show you frequently that they're capable of much, much more. I listen to this CD, hoping that an arrangement will open up, that the sound will get thicker and fuller, that they will sound like they were getting wrapped up in the musicality of it all, and it just doesn't really happen.

The CD opens with Movin' On Up, which relies too heavily on staccato, rhythmic lines which don't provide enough "meat" to the song. Thinking this could be the problem, I listen to the next tracks looking for more sustained parts in the background, and I find them. But the problem's still not fixed.

Building a Mystery comes next with a more sustained background, but the song still doesn't open up. The problem becomes more evident....when they're given more liquid parts, they fail to infuse them with enough energy to keep them moving. When they hold notes, they simply hold them, instead of spinning them and letting them GO SOMEWHERE musically.

When I reach Veering From the Wave, I'm pleased to find them singing more musically. They show that they CAN make their voices rise and fall, giving their lines some life. But when the song could open up, they hold back.

Then I get to Baba Yeh, a Ke Swahili traditional, and my favorite track on the disc. Their phrases have a shape to them, and in the song's bridge, the energy level jumps. They open their mouths and support their tone. They sound excited and, gosh darnit, it sounds good! Girls, you just gave yourselves away.

Actually, they've been giving themselves away the whole time through their soloists, who are all pretty good. There's good volume and energy in the solos, but not enough to carry the rest of the group.

They also show their potential in the bonus track. After a lackluster version of The Amalgamates' arrangement of Man in the Mirror (the group actually gets quieter when the song asks them to open up), we're treated to some French rapping with Victim de la Mode. OK, so nobody's really singing here, but they're making noises, and doing so loudly and with smiles in their voices. It's just a bonus track, so who cares about being overly careful, right?

The Smithereens have turned in an average yearbook CD. Pick up a copy if you're family or a friend. If you're not, well, you could find a CD like this at just about any campus across the country.

CDs are $15 (includes shipping to within US) and can be ordered through the Smithereens' web site.