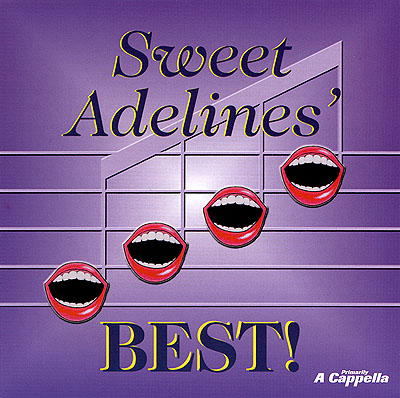 Sweet Adelines' Best saves its best for last, closing with a vintage recording of the sweetest sounding female quartet there ever was. The Chordettes' Sentimental Journey has a softness, a sweetness, that catapults it to the top of a long list of talented groups. That song, even more than any of the others, shows that barbershop can be a blend between pop and jazz without losing any of its uniqueness.

Women's barbershop gets a bad rap for its sometimes strident and over-sequined sound. This disc has next to none of that — or at least, the sequins are out of sight and out of mind.

If anything, this disc proves the quality and the consistency of the top levels of women's barbershop. All the blends are good, the chords ring, the intonation is eerily similar — you could easily convince a casual listener that these recordings were made by the same group. A few quartets stick out as exceptional — Panache and Ambiance are in a league of their own — but except for the Chordettes, the sound remains more or less the same. A stickler for the RARB rating system could go through and sort the songs into careful piles of "good" and "excellent", but none of the flaws struck me as great enough to break out the hair splitters.

Slow, Americana numbers are the epitome of women's barbershop, at least in my eyes, and this disc has a few worth sighing over. The Panache song is one of the best, sweet and blended.

Razzcals' Keepin' Out of Mischief Now adds a sultry edge to the song's older-but-wiser nature, and 4-Star Collection does a fine job with I'm Dancing This Dance in the Wrong Romance. I could have done with more songs in this genre, since uptunes like Thank You World and Coney-Island-Baby-type medleys don't move me as much. Nor do novelty tunes, although the two on this disc are at least funny and excellently performed — Main Event's If I Had a Voice and Weekend Edition's Help, I'm Turning Into My Parents.

Signature Sound's Mama's Gone Goodbye Medley proves that women can nail the same type of song and arrangement that have worked for dozens of contest-winning SPEBSQSA quartets. But for my money, I'd rather hear the ballads. They represent the unique strengths of women's singing and arranging, achieving more than a transposed version of the tried and true men's formula.

This is a disc for all seasons. Ardent women's quartet fans can rejoice in a collection that has the wheat sorted well away from the chaff, and nonbelievers can be pleasantly surprised by the quality and strength. It delivers as promised: Sweet Adelines at their very best.

What else can be said about barbershop music? You either like it, or you don't. No other style of a cappella is as successful in matching its most rabid fans, one to one, with its most critical detractors. Just write "Barbershop sucks" in an a cappella chat room and watch the carnage.

Like jazz or opera, the quickest way to fandom for those of us who don't take to it immediately is participation. A close second is immersive listening, to cultivate first a familiarity, then an affection. But for the rest of us, hearing the odd track, an album a year, or a group on the street corner, it's not enough to make us like it. That's the case at least as far as I'm concerned, because I just can't seem to get used to the stuff.

Upon receiving a collection of female barbershop entitled Best, I was a little excited. In performing due diligence as a reviewer, could my ears finally pry the complexity and excitement out of each arrangement, hear the impeccable tuning in every voice? Could I be Paul on the road to Damascus, and this album my barbershop salvation?

Not this time...which is not to say it isn't good. In fact, the album's first-rate. The songs were funny and poignant, the singing outstanding. I would especially recommend this album to high school choral conductors looking for a change of pace for their women's groups.

So for those of you who know what you're getting, you can't go wrong with Best. The tracks are well-chosen, without exception. So go ahead and add it to the collection. The rest of us can take a pass, stay open-minded, and keep waiting for the day of our conversion.

Sweet Adelines' Best was a bit difficult to score objectively, as it's possibly one of the best examples of niche marketing ever. A 46-minute CD of women's barbershop quartets would not usually catch my eye if I were browsing the CD aisles. So I sat down to listen to the album with a bit of skepticism.

The upside: I got the sense that this disc is indeed very good for its genre, women's barbershop. And a lot of the CD was decent — pretty chords and soloists, reasonably interesting arrangements (for barbershop). In general, the groups' attempts at humor were fairly well-done, such as Main Event's If I Had a Voice or Signature Sound's Mama's Gone Goodbye Medley. As you'll notice, many of the tracks scored a 4...good work.

The downside: I found that I kept thinking to myself "Wow, I don't mind this!". And while that may be a credit to such a niche type of performance group, it isn't really equivalent to "Wow, I really like this!" or "Wow! I want to buy this and let a friend listen to it!". Because of the nature of the style, the entire CD kind of blended together. It would be difficult to know that the CD was a compilation rather than a single group's work without reading the liner notes. Though many tracks individually were decent, the CD as a whole was not quite as enjoyable, warranting an average rating overall. At times, the tuning was a bit weak, and some of the higher soloists were a bit grating. Production varied from track to track as well.

Bottom line: if you like women's barbershop, this is probably a safe bet. If your tastes are more general, though, probably not.