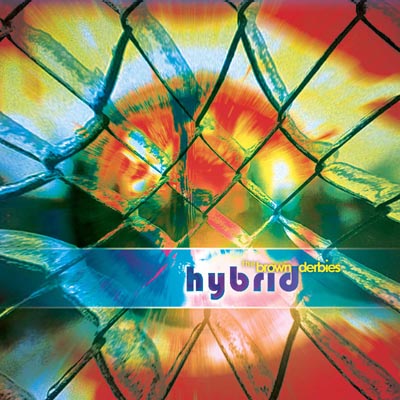 Frat-boy rock is the theme of the latest Brown Derbies album, a pleasant-enough romp though mainstream college radio. The Derbies seem to have given up on wit and goofball antics, aiming instead for a straightfaced portfolio. But Hybrid has neither the wit of Down Time, nor the twist of Jericho, and as a result it comes up short.

Bad tuning doesn't help their case. Nothing on this disc lives up to the current standard of a cappella musicality. As an all-male group, they can get away with less precision and remain acceptably mediocre. But a group with as much history as The Derbies ought to be making a record that's a lot closer to the top of the heap.

There are a number of things to like on this album. Soloist Marcos Santiago is a find, showing his gifts in covers of U2 and the Goo Goo Dolls. Birdhouse in Your Soul is presented as some kind of weird dance remix, as interpreted by arranger and soloist Jeb Havens, and the result is oddly engaging. South Side has a nice momentum to it, and Video Killed the Radio Star has a charming energy — a lighter touch that was a welcome change from the heavy sound that weighs down much of the album.

The songs of Hybrid tend to settle into a homogenous, mid-tempo blend. Most of the solos are aggressively generic, generally making an effort to sound like the modern rock stereotype, but not like the original singers of The Derbies' material. And yet, there are bright spots, showing hints of the album they could have decided to make instead.

To say that Hybrid isn't as good as The Derbies' last album is to praise it with faint damning. To my ears, it's not as consistent as Jericho. On the other hand, I've reviewed twenty-three college albums since Jericho, and this is only the third overall 5 I've handed out.

I'm most impressed because The Derbies avoid pitfalls that trip up virtually every other group with similar repertoire. Lawd, I've sat through a lot of college groups trying to cover They Might Be Giants, and only The Derbies have figured out that it's better to change the solo completely than to imitate John Linnell's whine. The Derbies obey the federal law mandating that all college albums include U2, but skip the subpart that requires straining on the high notes. Musicianship and rock energy, for once, arrive hand in hand.

I strongly recommend Hybrid to anyone who shares my propensity to swoon over guys who can sing. This is one group that doesn't sound like a glorified glee club or a frat on serenade night. Nick Moy and Lance Rubin are masterful; Marcos Santiago melted me into a pool of butter. OK, so they don't quite match Gwen Stefani, but they get points for managing to pull off a cover of South Side at all.

The Derbies have just about fixed my Jericho pet peeve. The otherwise top-notch arrangements still feature "beer-neer" diphthongs, but they've been mixed down, so they blend in much better. The only exception is on the weakest song, Farmhouse, where they twang the mellow mood away completely.

Speaking of the mix, the five Derbies who produced this album should consider renting themselves out to groups that can't put this kind of work together themselves. Outside of the silly "You nasty boy!" phrase sticking out of I Wish, The Derbies in charge of the project rarely miss a beat. A number of tempos are taken slower than I would have chosen, and some of the repertoire is questionable (did Video Killed the Radio Star really deserve this group's attention?). But the album shows backbreaking work and skill from start to finish. Rest assured, Hybrid is going to get plenty of attention come CARA time. But why should Deke and Jessika have all the fun? Pick one up for yourself.

I haven't heard a full recording by the Derbies since 1994's Down Time, so I was eagerly anticipating this album.

A group is lucky if their recording has one or two standouts that garner some recognition. The Brown Derbies are beyond lucky with Hybrid. Fully half the tracks are strong contenders for CARA and BOCA consideration. I'm fortunate because I get to enjoy all of the tracks; the nominating committees have to suffer through choosing just one.

The album is a true hybrid of alternative and jam band, new wave and techno, R&B and guitar-rock — something for everyone. Either Way, Black Balloon, and Brick are true highlights, although Bittersweet Symphony, Farmhouse, South Side and Video taint the disk.

The Derbies have taken the reviews of their 2000 release Jericho to heart, and have now upped the studio techniques to good effect, never overstepping into obtrusive territory. Most effects are used to enhance the product, rather than to disguise faults. The mix between the soloists and the background and across the spectrum of voices is unparalleled.

The album features great dynamics throughout. These guys are supremely musical — a real treat on a rock-intensive album. My collegues have mentioned their near-impeccable tuning on previous reviews, and it's still terrific. Sadly, like its predecessors, this recording still suffers from strained nasality on the block chords and guitar replications. This really hinders their overall blend and takes away from the mellow feel of songs like Brick and Farmhouse. It ruins Bittersweet Symphony (though they completely replicate the sound of the orginal) and distracts from a quirky Video. You simply can't make "ba-wee-rrnns" fit anywhere nicely. If you like that bright and brassy sound, you'll love Hybrid; it has the brashness that is balls-to-the-wall boy a cappella.

One of my biggest pet peeves with collegiate arrangers is the tendency to neglect the ending of a song, as if a strong closing isn't as important as the opening. People (even reviewers) will forgive almost anything if your arrangement obtains, maintains, and retains interest. Based on their arrangements, Matthew and Dave seem to agree with me; Jeb and Nishant are learning fast. The Derbies will remain on top of the game for years to come as long as these fellows keep pumping out arrangements.

I had two pages of superlatives describing soloist Marcos Santiago, but the word "DAMN" suffices. Nuanced, controlled, lyrical, interesting...flawless. I hate the original recording of Black Balloon and its myriad of collegiate covers, but I listened to The Derbies' version 13 times before I could change to another song. Marcos also opens the album with Hold Me, and I think that put me in just the right mood to enjoy the album.

Run, fly, email, beg, cash your piggy bank, do whatever it is you need to do to hear Marcos and the rest of the boys on this album.