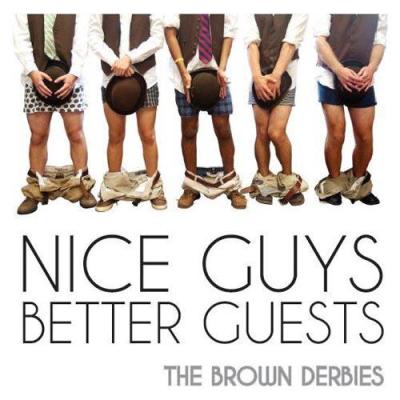 Back when I was in college — yup, in the last millennium — I recall the Brown Derbies as a first-rate group. If the Derbies were not at the top, then the group was not too far from the best all-male groups (at least on the East Coast, which I believe was the extent of my exposure, save for Stanford's Fleet Street Singers).

Were it not for the presence of six songs that were released in the 21st century, I might have believed Nice Guys, Better Guests was an updated, re-edited, re-mastered edition of the Derbies late-'90s set list. I'm not saying the guys actually performed all, or even any, of this material in the late '90s, but it sure sounds like they did. And that ain't a compliment.

The a cappella of my college years was fine for what it was — I daresay, in some cases, it was thrilling at the time — but with few exceptions, the arranging style, the percussion technique, and the syllable choices just don't hold up almost twenty years later.

So the whispered "shi-ka-ka" percusssion accent in Father Figure isn't enough to establish mood, in the absence of any meaningful dynamic variation whatsoever.

So the opening phrase of Toxic, when performed as the mindbogglingly predictable, overannunciated "Bom. Ba-diggy-diggy-dum. Wee-doo Wee-dee-doo." does nothing except introduce my face to my palm.

These are just a handful of examples in a sea of simplicity and squareness and cheesiness that flows unabated through Nice Guys, Better Guests.

Once in a while, the guys get it almost right: Nightswimming shows some creativity in tackling the primarily piano (plus string symphony) original with a contrapuntal arrangement that builds nicely. I'll Make Love to You at least has the full, rich harmonies of the original even if its utter lack of dynamics makes it the least passionate rendition I can recall. And Good Old-Fashioned Lover Boy at least has a lead from Rob Warner that does right by Freddie Mercury, and its general style and mix is consistent with the sort of sardonic, slightly aggresive, dry feel of the original.

But more often than not, slavish straightforward transcriptions devoid of any imaginative, adaptive arranging, overcomplicated and exposed syllable choices, and an energy level that I can best descibe as "blase", rob each of the covers of their unique feel and flavor. Little Secrets is rendered milquetoast, devoid of the electronica, the kids chorus, and the specific artistic choices that make the original enjoyable. Shout is arguably the mot predictable arrangement I've ever heard — like the sort a bunch of folks at SoJam could come up with on the spot if you asked them. And for a song that is all about energy, the Derbies leave me at a resting pulse and barely conscious. Decidedly quirky, folk-rock-y songs like Little Lion Man and Crane Wife 3 sound pretty much like everything else — and that's a travesty for the kind of very specific and (somewhat) unusual choices the original groups made with their music.

I wish the news was better — this is just a very disappointing effort from a group that brings back fond memories. As they say in Avenue Q, "I wish I could back to college..." (for many other reasons, too — but it also might make me like this album a lot more).

Let's start off by saying that if you are already a current fan of the Brown Derbies from Brown University, you probably already have this disc and nothing that I say in this review will change your mind from thinking that Nice Guys, Better Guests is the best album (you've ever heard) from the Derbies. As well, if you are a long-time fan of the group, Nice Guys, Better Guests fits the ear like an old familiar glove as the music comes pouring out of your speakers.

And that's the major problem.

If at least five of the fourteen tracks were of the same timeframe of the remaining tracks, this album could have been released in 1995. And it would have been better received as well. From song selection to production, this album is mired by and yet revels in what can best be described as the Brown Derby tradition: the voice is king.

But whose voice is definitely in question. The mixing choices leave me baffled. Technically, blend and balance are fine. Even if it isn't the most pristine intonation that I've ever heard, all of the chords line up and matching vowels actually match up. And with the strictest definition of "balance", all the parts are balanced, though that leaves a lot to the imagination.

Background voices aren't ever really in the background. That Tenor 2 whose solo was cut from the album made sure that his obbligato got heard on at least two of the other tracks. Blocks were just that: block after incessant block of sound. Moving lines move to the front of the line most of the time. That's not to say that there aren't any dynamics — they are scattered throughout, but when you have to strain to hear the melodic line over the cacophony of supporting voices, that's a bit of a problem. I guess that was the Derbies' nod to current pop music — drown out the lyrical lines for "thumping" bass and percussion. But seriously, I'll Make Love to You... what the, what is he saying in the beginning?

Gotta get a few things off my chest. First, don't make fun of a George Michael song regardless of the "truthiness" of the commenting lyrics. Just don't. Remeber that intonation compliment I gave? Well, it's not always true on the solos here. Austin Boxler doesn't support enough in the beginning of Prince of Spades, a song that I ended up really enjoying as it progressed. I am begrudgingly giving my customary "5" to this rendition of Toxic; less so for Nightswimming. The first half of Nightswimming solidifies the "5" that it receives, even if the song begins to meander just a bit around the two-minute mark until its glorious ending. It's a beautiful piece of music that I'd love for my group to sing.

The arrangements are good, but unassuming across the board. And I can say this because the mixing makes sure that I hear every line that was created.

For the future, I hope the group focuses a bit more on moving its production style into the 21st century. I'm all for groups wishing to stick to a tradition, and I applaud the conviction for natural sounding recordings. But such an ideal has to be warranted. If you don't have the overall musicianship required of having nothing but the human voice present on your album, then please make sure that you use some of the studio techniques at your disposal. I'm pretty sure that the studio masters in Overboard could have supported the innate talent better if they had been allowed to.

As I stated in the beginning, if you are already a fan of the Brown Derbies, this review isn't for you, for you have already fawned all over Nice Guys, Better Guests. You are the reason why the repeat score is so high. Y'all have worn the CD out already. But for anyone on the fence, if you long for the glory days of the Who Are You-era Derbies, rest assured this group sounds close enough that you could be fooled. Otherwise, I suggest staying away until the next album before inviting the Derbies to your party.

The Brown Derbies have no filter. The guys have a lot of humorous ideas, but they are rarely used effectively. Every joke is a trade-off, and when it doesn't support the song, humor can subtract more than it adds. On the whole, the album's positives are neutralized by its problems.

Father Figure goes on for four minutes before the backs mock the lyrics of the song by singing, "This song is creepy. He wants to be her father. That's kinda weird." Don't ask me to listen to this track as a serious song for four minutes and then tack on a line saying that you think the song is creepy. If you're going to mock it, commit to that by making the whole song a parody. But because the Derbies take most of the song seriously, I come away confused. What is this song trying to be? And why should I think this is a good song if the singers are making fun of it?

I'll Make Love to You starts awkwardly with spoken words that are completely covered up by the backs. I have no idea what is being said, and this mixing is unforgivable.

The Derbies are at their best with fun, high energy tracks like Little Secrets and Soul Man. The simplicity of these arrangements lead to effective and engaging singing from the backs. I'll Be Waiting is a good track, but I am disappointed by the arrangement. In the original, the pre-chorus is a powerful harmonic progression that sets up the key change at the chorus. Here, it is replaced by a strange series of gradually transforming clusters.

This album is unfocused. Humor gives the Derbies a lot of personality, but more often than not, it becomes a distraction. It takes you out of the character of the song. The group robs itself of any truly genuine moments by forcing humor into many of its ballads. There is a 34-second track called Telephone Message that is an answering machine message to the tune of the Pokémon theme song. The guys would have been better off leaving these gags for live shows. If they want to be funny, they should have songs that commit to that instead of having jokes that feel tacked on.

Nice Guys, Better Guests is not bad, but fails to do anything particularly compelling. To rise above the mundane, the Brown Derbies need a clearer vision of what each song is supposed to be and how each track functions in the context of an album.

You can order Nice Guys, Better Guests on the group's website for a physical CD or download.