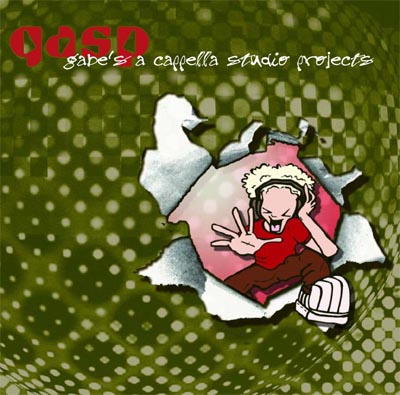 I have a hard time trying to think of someone who has shaped contemporary a cappella more than Gabe Rutman. It seems like everything that the man touches turns into gold. Whether as an arranger, a producer, or a performer, Gabe never fails to push the benchmarks of a cappella to a higher level.

GASP is a collection of studio tracks that have in some way been touched by the hand of the master. The diversity in the groups selected for this album allows the listener to find something new and exciting each time through. Some of the country's top professional groups show up here (Ball in the House, spiralmouth, and Sixth Wave), as well as some of the top collegiate groups (The SoCal VoCals and Off the Beat).

My favorite track was No Career, a new release from spiralmouth. Just getting to add this track to your collection is worth the price of this album. A revamped version of Nothingman from Off the Beat and As from The USC Sirens were two other highlights for me. A pet peeve I had on this album was the selection of Something I Don't Know by Ball in the House. It's an awesome track (as noted by my track score), but at certain points in this song (I believe 1:04 is the first instance), something goes wrong on the percussion effects, and I always think that a big rock flies up and hits my car while I'm driving. This really bugs the hell out of me and happens more than a handful of times on this track. Okay, enough personal peeves…

Billie Jean by The Claremont Shades is the weakest track on this album. The bass and percussion start out very promising and even the lead is pretty good on a tough solo, but the background voices fall apart all over the place.

I didn't really get the humor in Fluffy's Master Plan for World Domination by The Bobs. In fact, I wouldn't miss this track at all if it weren't on the album. I did, however, think that Enormous Penis showed the musical and comical genius that I've grown to expect from Da Vinci's Notebook. As for The Ladder by UCLA Awaken ... eh, not a huge fan.

This album has something for everyone and would be a great addition for anyone who collects the best of a cappella music. I'm sure that we're going to see many more great things from Gabe Rutman in the future, and I for one can't wait.

I played some tracks from GASP for a friend recently. As soon as we hit the first chorus of Beautiful, she seemed taken aback. "But that's cheating!" she exclaimed. Oh no, let's not go through this whole debate right now. I could point her to Mark Manley's senior thesis or any number of rec.music.a-cappella threads. That being said, if, like my friend, you're turned off by heavily processed a cappella music, you're going to take issue with a number of tracks on this disc. GASP is a collection of tracks that have passed through the hands of Gabriel Rutman, aka Gabe Mann, former Off the Beater, spiralmouther, and RARBer-turned-recording-engineer at Asylum Studios in Los Angeles. Let's face it, he enjoys playing with a lot of effects. He does it well, so why shouldn't he?

One of the most impressive aspects of this album is how kicking the chick groups sound. Gabe is a genius when it comes to enhancing the low end of female a cappella. With the help of his octave pedal, the Sirens and Dilemma never need a male bass or percussion (OK, so Andrew Chaikin provides the perc for the Dilemma track, and it's wicked). As Gabe writes in the liner notes, "Don't tell me all-female a cappella can't rock.". The ladies of Awaken (it's usually a coed group) also turn in a beautiful performance on The Ladder, appropriately smooth and ethereal. I previously gave this track a 3 in a review due to a lack of enough oomph at the peak and its context on a coed disc, but on this disc, the smooth blend, dead-on first sopranos, and emotional solo really shine, and have earned it a bump up.

There's a wide range of genres on the album. You've got your top-notch collegiate material, chicks getting down and dirty, tweaked-out vocal rock from spiralmouth, boy-band stylings from Ball in the House (the rocker and the ballad, both too poppy for my taste, but as tight as it gets), smooth vocal jazz from Sixth Wave, and humor from The Bobs and Da Vinci's Notebook. (The Bobs track is one of the weirdest I've heard, perhaps too weird for casual listening, and the Da Vinci's Notebook track is perfectly bright, tight, and ridiculous.)

This range works well as an example of the varied work Gabe does (and not just as engineer, as he's also a part of spiralmouth, and he arranged and soloed on Nothingman from '95's Toolbox). There are a number of tracks which steer clear of hyperproduction (although Icarus does have some added delay that elevates the song's peak to a moment of pure rapture), which lets you know that Gabe can work with a solid live sound. Unfortunately, as a whole, the variability lowers the repeat listenability of the disc. I like albums that hang together, and here I feel like I'm channel surfing with Gabe. It's a bit jarring going from Billie Jean to Vincent and then to Otherside, for example. But in general, the disc is laid out as well as it can be. The Enormous Penis interlude between Motorcycle Drive By and Nothingman, for example, is possibly the best placement for those tracks.

There's a lot of great music packed in here. Four of the best tracks ever to come out of USC (including an alternate take of the bridge of As) shake hands with an upgraded version of vintage OTB and some top picks from BitH, spiralmouth, and more. If listening to compilations with wide scopes of genres doesn't rub you the wrong way, this disc is a must-have. Pick up a copy, throw on your headphones, and see what Gabe's been up to out West.

This has been the hardest review I've had to write in my short career with RARB. Why? Because when a critic must review someone who is a "star" in his/her field, that critic will often have a knee-jerk tendency to tear the star's art apart, just for the sake of appearing cool/knowledgeable/cutting-edge. I've fallen prey to that temptation many times. And if any recording this year has the propensity to cause such a reaction, GASP — gabe's a cappella studio projects would be the one.

Fighting that nasty urge, I'll say up front that you have to buy this album. Really, that's all you want and need to know. Across the board, it is phenomenal. I have a few personal dislikes, naturally, but they are so minute that I'm almost embarrassed to admit them. Buy it and dance happy jigs for the rest of your life because you did. It's also the only place to get spiralmouth's new single No Career, which seals the deal for many of you anyway.

It's a documented fact that CARA Artist of the Year-nominee Gabe Rutman is one of the best producers working in the business. This album proves it. Stunning sound production, natural talent from the performers, crazy energy, and superb musicality make each track sparkle.

Rutman has created a remarkably cohesive compilation of groups and styles, ostensibly to promote the artistry of the performers, but it does an excellent job of showcasing his handiwork as well. This diversity actually helps the creativity of the recording. Flowing the liquid jazz intensity of Sixth Wave into the relentless rock of spiralmouth, the soulful divaness of Dilemma and the zany comedy of The Bobs is both daring and brilliant.

I will admit to having overlooked the original tracks of several of these songs, Icarus, Fluffy's Master Plan, and Nothingman in particular. Icarus is absolutely breathtaking; I understand why Sixth Wave was the 2001 Harmony Sweeps winner. I'm also hopping on the USC Sirens bandwagon. They provide the two most alluring tracks on the album: the beautifully electric Beautiful and the funking graveled-groove of As. These ladies should go pro! My spectacularsupadupafly[tm] mix CD is getting quite full.

The only true misstep on the album is the inclusion of Billy Jean (sic) by The Claremont Shades. While I'm sure it was a great track for the group's recording, it is simply outclassed on this album of superb tracks. And I'm probably going to be struck dead for this, but I didn't enjoy No Career as much as I should have. Maybe I don't rock anymore. In fact, most of the rock songs (save Even Though) weren't as captivating as the pop, jazz and R&B songs. I just heard loudness for loudness' sake, annoyingly coy guitar syllables, "edgy" vocals, weird balance issues — gulp, I'm getting old.

Gabe, please remix Hush just for me, okay. Please? It's my favorite.

Like I said, get the album. You'll gasp listening to Beautiful, Icarus and As.

GASP is available at Mainely A Cappella and Collegiate Acappella.