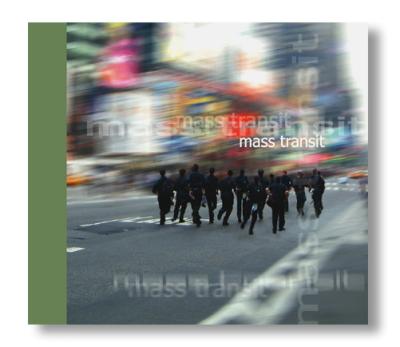 Perhaps I shouldn't be surprised that NYU's all-male Mass Transit decided to go with an eponymous 3rd album — the most appropriate alternative would probably be "The Jon Waller Show". OK, maybe the "The Jon & Jeff Show". Thacher, that is.

It's not altogether surprising that Waller figures prominently in the success of this album, seeing as how he is the group's musical director. And similarly, it's not at all shocking that Jeff Thacher's hand is noticeably present, since he served as the CD's producer. When both are at the top of their respective games, this album soars, and when their efforts are off-track or absent entirely, the listener is bound to sit up and take notice. Overall, it makes for a generally A+ album, albeit with a few hiccups.

To say that this album is mixed "wet" would be an understatement. Heck, this album could have received sponsorship from the law firm of Echo, Chorus and Reverb, LLP. Fact is though, when the effects are enhancing quality musicianship, they bother me far less. And the majority of the time, Mass Transit offers up solid arrangements, good block backgrounds, thumpin' V.P. (with Jeff producing, that had better be good!) and enjoyable solos.

Much of the credit for this must go to the MD, Jon Waller. With the possible exception of Cry Me a River — a poor choice for "covering" in my opinion and, though rendered well, really more a piece of technology than a piece of music as performed on this album — his arrangements show a flair for the simple yet effective, and a knack for wide open voicings that really let the chords ring. (Well, that and a bit of processing helps too.) Indeed, when Waller is not behind the arrangement, the selections tend to suffer a bit. The middle section of the album — Ben Folds Five's Army, Guster's Mona Lisa and Howie Day's Morning After — don't live up to the quality of the rest of the tracks. As a rule, Waller's work tends to stand better on its own and allows the technology to enhance what is already a quality piece of arranging, whereas the others seem to lean too much on the technology to compensate for underdeveloped arrangements (the exception being the final track, which sounds virtually unproduced, making it both refreshing and somewhat lacking at the same time). Sure, these other tracks are good, but most of the rest is that much better.

Would that Waller stops there, but instead, he also takes lead (or a share thereof) on It's Raining Men, In Your Eyes and Cry Me A River. Now, In Your Eyes is probably on my list of songs that I wish had been retired ages ago, and to be honest, Waller's arrangement sounds eerily reminiscent of many I've heard before (including a CARA-winning version from the Brown Derbies). But this version, while nothing new, is terrific, and Waller's solo is equally wonderful. As noted above, Cry Me a River is not one of my faves on this CD, but the range Waller shows off on this track will give you pause when you consider that he's listed in the liner notes among the group's basses (!).

I realize that most of what I've written above is qualified praise, so let me just quickly throw out some unqualified praise to the first 3 tracks of this album, which provide as exciting a start to a collegiate album as I've heard in some time. Also, Mass Transit is blessed with tenors that should be the envy of many other groups, with Devin Proctor and Mike Bunting at the top of that talented heap. And most of all, let me sing the praises of Footloose, which just put a grin on my face from ear to ear. Fun arrangement, fun percussion, fun solo, perfectly produced — just fabulous.

For those who care — and if you don't, feel free to skip this paragraph — Jeff Thacher's choices in producing this album do make me want to hop on the subway and take a quick trip down to NYU to hear these guys live. With all of the aforementioned reverb and such, as well as some sampling and very noticeable manipulation of the stereo pan, I had no idea that the group had as many as 19 members (19 names are listed, though their website has them down to 16 as of last semester). Simply put, with such generous use effects, I'd bet they could have produced this album with half as many. Usually, I tend to get on groups' cases for being too large, but there's no real "cheating" in numbers to be found here. The production makes that essentially irrelevant — mind you, this is not a criticism per se, but it make me wonder on numerous occasions what kind of sound these guys can actually offer up in live performance.

In any case, as a graduate of UPenn, rich in a cappella tradition, and a frequent visitor to Boston, even more deeply steeped in a cappella, I have to admit that I've always been a bit disappointed that New York, the Big Apple, my hometown, has never really carried its weight when it comes to the collegiate a cappella scene in the Northeast Corridor. There are a few groups here and there, but it's been a while since I've heard this good an all-male effort from my fellow "New Yawkers" (maybe not since the late '80s, early '90s Columbia Kingsmen). So while mass transit (lowercase) may be the bane of some folks' existence, Mass Transit was a real treat for me. Look forward to hearing more.

Mass Transit's third album starts with a sophomoric, unfunny instance of homophobic humor (imagine an all-guys group covering It's Raining Men and adding a stereotypically gay comedic dialogue, and you pretty much know all you need to know). It ends with a secret track of…random street noise. Not exactly the bookends I would choose, but to each his own.

In between, the listener is treated to a number of nice moments, and a number of not as nice ones. Mass Transit has a hard time getting all of the elements right in order to create a consistently excellent album, or for that matter, multiple excellent tracks. Some arrangements are effective (Two Points for Honesty is a standout), but most are overly busy, overly simplistic, or somehow both. Most soloists are solidly mediocre at best, but then you hear the lovely harmonies of Mike Bunting and Tyler Costin on Mona Lisa, or Sudar Phani's velvet tones on the aforementioned Guster cover. Production on one track is tasteful and effective, while unnecessary effects distort another one beyond recognition. Et cetera.

Mass Transit has the potential to create magic. The opening of Two Points for Honesty was masterful, with delicate use of production, double-tracking, and textured arranging that combined to give me chills. Mona Lisa and In Your Eyes had similarly shiver-inducing moments of harmonic beauty. But then the group subjects us to an exceedingly irritating version of Footloose, both badly arranged and produced. Live's edge is reduced to a geeky American Idol cover on Einstein on the Beach. Army was one of the most annoying arrangements I've heard in a long time. And so on. This album is a roller coaster of consistency and my interest surged and fell accordingly.

All is not lost. Mass Transit has some stellar production on this album that really enhances their most effective arrangements. The disc is infused with a steady, driving energy that many groups fail to capture without succumbing to associated sloppiness. Blend and pitch were generally good (although the production was clearly hiding a few missteps here and there). So let's up the consistency on solo performance, arranging, and repertoire selection — and then Mass Transit will take their rightful place among the up-and-comers of the collegiate recording ranks.

Mass Transit has released an intriguing and fascinating album that is rife with captivating contradictions.

Mr. Jeff Thacher offers outstanding production work, especially in his ability to mask a surprising number of tuning inconsistencies in the performance in general and the lower voices in particular. On the other hand, the high degree of activity in the production and effects may also contribute to a lack of overall rhythmic cohesiveness — though that too might be a function of performance. It's honestly hard to tell because there's always so much going on. But overall, the production is effective and entirely compelling.

Arrangements are incredibly busy and active, providing a sound that is far more full, intense, and forceful than a cappella projects usually accomplish. But with all that wonderful intensity, songs often stand still (albeit at a high level of action) because there's rarely any build or shape to the arrangements. Those same songs are frequently so hectic that they simply lack focus. For me, this causes a sense of aural overload, as if I suffer from a musical case of ADD.

While the tuning was only adequate and at times distracting, the overall vocal energy of the CD is impressive. At the start Mass Transit is captivatingly lively and powerful for a studio production, but they just can't seem to sustain those early levels through the rest of the disc.

Vocal percussion deserves a mention because it plays a huge role. The VP, both sampled and live, is outstanding. This is a Jeff Thacher production, after all! But at times I find it even a bit oppressive. There are only so many repetitive loops I can handle before I find them grating.

My excitement over this recording (which is considerable) lies in these various contradictions and inconsistencies. I listen to the disc as an intriguing and challenging musical and intellectual exercise. In this manner, it is entirely compelling. But when it comes to pure ear candy and enjoyment, it's not very high on my list. Mass Transit gives a lovely example of how production can make a significant and important impact. But it nonetheless shows that outstanding production with only an average performance can't boost an album past good into the category of excellence.

To order our album, visit the group's recording webpage.