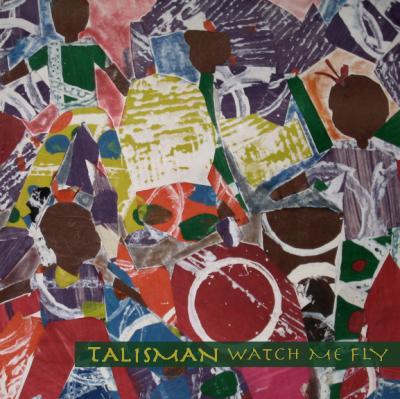 Talisman's new album celebrates the glory of folk music, taking its strengths and weaknesses on a marvelous journey. It soars to glorious heights even as it sometimes falls victim to the genre it has embraced.

At its best, Watch Me Fly takes traditional roots to new heights. Ron Ragin's arrangement of Swing Low is wonderfully conceived and brilliantly executed. Twin female soloists create magic on Chant of the Islands, swirling around the group's melody. And the title track is contemporary, polished and clear as it brings the album to a close. Occasional drumming adds a welcome texture, the voices have a terrific range of timbres, and many of the songs, even the simpler tunes, have an infectious rhythm.

But Talisman's polish also creates an impossible standard at times. Because the group has put so much work into its repertoire, and because it is a top-notch chamber choir at heart, problems in tuning and intonation stand out. "Real" folk music is often powerful in its imprecision — look at the Chieftains, or Sweet Honey in the Rock, for example. But when you clean this stuff up as much as Talisman has, then add anything close to "authentic" intonation, it just sounds out of tune. The women on By the Rivers of Babylonare a classic example. They have a great, nonclassical blend. They are also consistently under pitch, and some of the soloists are at once wonderfully passionate and scarily out of control. In another case, Wajeehleh-Yihm nails the difficult rhythms and the huge swooping overlays, but the more unison bits are never quite in tune.

Talisman is admirably inclusive of cultures and singers and backgrounds. For the most part, the group keeps its political correctness in check and presents the repertoire gracefully. In one case, however, their approach to explaining their songs crossed a line and it bears mention. The liner notes describe Strange Fruit as an "original work" by Iquo Essien, when it is nothing of the sort. An original interpretation, yes, a new version, sure. But it is emphatically not an original work — that honor belongs to the composer and lyricist of what is now a standard part of the jazz songbook. This slip-up takes away from Essien's wonderful solo work, and shows yet again that added polish requires added precision in order to be successful.

Talisman's last release, Passage, is one of my favorite a cappella CDs of all time. It's one of the only a cappella albums I keep in my iPod. So naturally I was excited when their most recent release, Watch Me Fly, arrived in my mailbox. When I put it in my CD player, my first thought was "Well, it sounds good, but it isn't Passage." But with just a little further listening, I came to understand that, while not Passage, Watch Me Fly is still a phenomenal CD, in many ways better than its outstanding predecessor.

The singing on this album is nearly impeccable. The chords are so well tuned that the whole disc rings. The basses are cleaner than before, providing a very strong foundation for the higher voices to work above. The whole group, in fact, is amazingly clean throughout. I would love to see one of their rehearsals, because songs like the intricate Tumba make it clear that these men and women have a strong attention to precision but also work on their music diligently enough that said precision doesn't interfere at all with their energetic and passionate performances.

The first track on Passage strikes you with the power of Talisman's female vocalists, a trait that characterized that disc, but Watch Me Fly opens with a male solo, preparing the listener for the increased male presence on this album. The men have stepped up their game for this disc. Where they once lived in the shadow of the great women soloists of Talisman, they now give the still-wonderful women a run for their money. The women have not slacked off in the least, though, as soloists or as a group (take notice of the soprano solo capping off the end of By the Rivers of Babylon and the piercing intensity of the voices on Wahjeeleh-Yimh). There are simply stellar performances all around.

Passage had a number of tracks that worked up to a dazzling fever pitch, and it was this aspect that I missed most on my first listen through Watch Me Fly. Some tracks still accomplish the same effect (Wahjeeleh-Yimh and Tumba are two good examples), but this album's strengths are gentle simplicity and subtlety. A simple arrangement like Sweet Honey in the Rock's On Children shines because of the good singing and group musicality, where the singers seem tapped into each other's dynamics like pieces of the same instrument. Once you notice them, it's impossible to not be charmed or moved by touches like the haunting wind and creaking rope sounds on Strange Fruit, the trills of joy scattered throughout the disc, and the delicate percussion on Chant of the Island. A note for the purists: there are hand drums and other non-vocal percussion instruments used on this disc. The percussion adds to the group's texture rather than upstaging the voices and is part of Talisman's well-crafted and empowering sound.

Any fan of world music would do well to get a copy of this CD. It's simply an absolute treat. Talisman has earned yet another distinction: they are the only a cappella group that's earned two albums in my iPod. Keep doing what you do; I'm looking forward to what you create next.

The Stanford Talisman's website contains praises from Bill Clinton and the director of the St. Olaf Choir, and it's no wonder. Maybe this is my classical training showing through, but to be perfectly honest, Watch Me Fly is quite possibly the best collegiate a cappella album I have ever heard.

When I put this disc in, my first thought was "How old are these guys?". They carry a vocal maturity well beyond that typically showcased by college-age students. The voices are fully open and resonant, supportive, and rich in quality and texture. How they found 18 students with such fantastic vocal ability, particularly at a school with several other top-notch groups, is beyond my comprehension.

My favorite tracks are Toyi Toyi and Strange Fruit. Toyi Toyi is a modern remnant of an African war dance, which was used to "strike fear into the hearts of the police" sent to quell South African protest groups. It has a great effect as the first thing the listener hears, immediately setting the precedent for a powerful album. Strange Fruit begs me to ask the question, can an a cappella cover be better than the original? Not that Lady Day is easily outdone, but this masterful arrangement captures the terrifying, yet still somehow enchanting hold the song has over its listeners. Multiple soloists symbolize the ubiquity of the song's themes, and each sings powerfully. Particularly haunting are the subtle background sounds: soft wind, and a rope creaking as it sways under its burden. Talisman has outdone itself on this song.

Much of the credit belongs to the fantastic arrangements. Following many of the themes I mentioned in my review of Shir Appeal's Unpealed, the songs have the compact range typical of non-Western music, with the basses and sopranos rarely straining to the tips of their ranges. Production is also masterful: when the sopranos do reach higher registers, they are drastically pulled back to keep from sticking out. The blend is also terrific: every person is always singing exactly in unison with others on that part. Keeping with the theme of fantastic vocal musicianship, the soloists excel. Each one understands the message and important of his or her song, taking personal ownership of the notes and lyrics.

Are there criticisms? Sure. At times, the almost perfect tuning sounds a little too good to be true, resulting most likely from a little help from the engineer; this is particularly true of held fifths. Songs and arrangements can tend toward too much repetition. Sometimes the upper voices' background vowels aren't as deep as the lower voices (see for instance Rivers of Babylon, the opening of Wahjeeleh-Yihm). But these are nitpicking, and the only reason I can notice them is because of how great the rest of the album is. This is a fine piece of work, one I will be sure to listen to for many years to come.