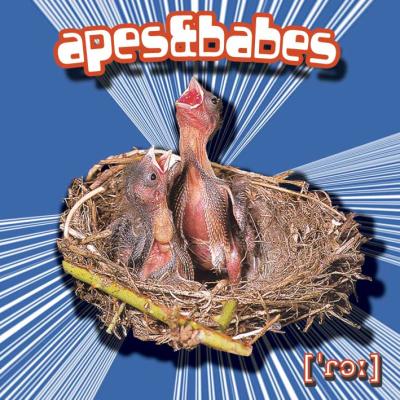 Apes&Babes, a coed octet out of Trondheim, Norway, delivers a highly stylized and original sound on their latest release, Rå. The album contains at least four languages, with repertoire pulling from Norwegian and Irish folk tunes, French electronica, Austrian '80s pop, Destiny's Child, and more. I can honestly say I've never heard anything like it, and that's a great start.

The group has an edgy sound, with a wide variety of textures coming from its vocalists. Sometimes the backgrounds can be very smooth and sleek, sometimes piercing, sometimes bubbly, sometimes straight up aggressive. The tuning is mostly right on, and the few imperfections don't bother me much. Though the album was mixed by three different engineers (Thomas Henriksen, Pål Brekkås, and Bill Hare), the album hangs together as a cohesive whole.

The arrangements are simply great. They do some amazing textural things (in the remix of Bach's Toccata, Baba Yaga, and the bagpipe-ish intro to She Moved Through The Fair) and have some fantastic transitions (between the different segments of the Jean Michel Jarre medley Zoolok/Orient Express/Oxygene IV, and most strikingly from Killing Me Softly into Bruremarsj which is just stellar). They also play with some weird and fun noises (the intro to "Zoolok" and in Baba Yaga and Bruremarsj) that help make their sound so unique. From the Peter Murphy-esque lead on First We Take Manhattan to the balls-out rocking and wailing on Baba Yaga, the leads are all quite good, with good matching of soloist to track, and strong commitment to the song. However, the leads still take a back seat to the arrangements and the backgrounds, and the instrumental and ensemble tracks are among my very favorites on the disc.

There are still some mistakes that could be worked out in future recordings. There are a couple odd percussion-type noises that sound out of place in otherwise stellar recordings, and there is a comedic accent thrown onto the "One time, one time"s in Killing Me Softly that is out of place and spoils the mood. Independent Women, Sex Bomb, and Rock Me Amadeus are a bit lacking in thump, which I think could be rectified by making the basses a bit meatier, but it might be my familiarity with these songs that leads me to be more critical of them.

Regardless of any minor complaints I might have, this is quite a special album. From the brightly colored liners filled with pictures of birds and phonetic spellings of the track names, to the recordings themselves, this is a CD that demands attention, and it doesn't disappoint.

Apes&Babes is a Norweigan mixed group. That's about all I can tell you about them — as their cover notes and website are all in Norwegian. In fact, the only reason I know that much is the contact address on their website with the big "NORWAY" emblazoned at the bottom. But perhaps this is a good thing — we will let Apes&Babes' music speak for itself without preconception or bias.

This is one of those eclectic a cappella albums; along the way, you are treated to Destiny's Child, Bach's Toccata, and a song called Sex Bomb. The group spreads itself all over the place; I count at least four different languages sung on this disc. For example, the middle of the disc takes us through classical music, French pop, Indian yoga music, and the replicated sound of Irish bagpipes. And remarkably, the final result hangs together better than many all-pop collegiate albums I've suffered through in recent years. Apes&Babes brings great energy and commitment to each of the various genres it attempts. While nothing here is absolutely stellar, everything is pretty darn good.

The weakest tunes are probably the covers of American pop, but a few nice touches manage to save them from complete disaster (e.g., the raucous backup vocals near the end of Independent Women, purposeful tweaking of the Fugees sound through a creative, Indian-influenced arrangement and approach). Indeed, many of the tracks here have something of note. The voices of Apes&Babes are bright and sparkling, and their edgy blend works well with their repertoire and style. Most of the arrangements here are dynamic and interesting, and kept my attention even on songs that themselves did not enthrall me.

This is a really solid and fun album — nothing to write home about, but still worth a listen for the average listener. Particularly for the randomness that is Zoolok and Rock Me Amadeus. I don't really get it, but I think I like it!

Every few years a group comes along that completely re-energizes and re-invigorates me and my dedication to (read: love of) the a cappella community. More often than not, it's been a Scandinavian group that has captured my heart and ears with a tenacity not to be believed. Several years ago it was Sweden's The Real Group, with its impeccable musicality and unbelievable talent. Live in Stockholm is probably the best jazz album ever with Original being one of the most well-crafted pop recordings. Then, two years ago, the new-and-improved baSix funked, grooved and rocked its way into superstardom (lest ye think me stupid, I didn't really like the group's first album, even though it was a huge hit in their native Denmark. For me, Embodiment, was the group's real coming-of-age).

And now it's time for Norway's Apes&Babes to complete the trifecta.

Theirs is an energetic performance that truly captures the powerful joy that comes with singing with wild abandon. Wave after wave of frenzied delirium projects outward through the speakers. At the end of Rock Me Amadeus you simply exhale. There is nothing else that you can do. This album is an aural version of "Mr. Toad's Wild Ride" at Disney World, only with cooler harmonies, incredible vocal percussion, and a touch more psychedelic references.

The blend will not be to everyone's liking (think the last few albums by Off the Beat). And sometimes the English gives them trouble with intonation and pronunciation. Lyrics are changed to make sense to them, instead of what was written on the original artist's page. This hinders the babes more so than the apes.

You can tell the group is made up of fantastic musicians (two of the babes have masters' degrees in music) by the way they are able to maintain a solid core sound while quite literally screaming their heads off in certain passages. The dubious chord-ringing is more problematic in the female voices, notably in the Independent Women trio. But really, I'm not complaining because it adds a sweet punk element to the edginess already in the group.

The first two tracks aren't the strongest on the album because of the "tuning" issues, but from the third track on, you are completely overwhelmed by the group's talent and creativity. These are cats unafraid of the human voice and any pre-supposed boundaries set on singers. The ugly is cherished just as much as the pretty, and both qualities are used to create one of the most compelling albums of this decade. Brash is beautiful.

I will have to point out that the bagpipe work in She Moved Through The Fair and the seemless transition between Killing Me Softly and Bruremarsj are inspiring. Those three songs make up my favorite section of the album with an eclectic appeal unlike any other album I've experienced in quite a while.

I'm writing this review on my birthday (1/23), and I have to say that old people rock! It's refreshing to see a self-proclaimed party band made up of members all over the age of 25, with most being over 29! Let's keep showing those whippersnappers what is really going on.

To order the album visit Mainely A Cappella.