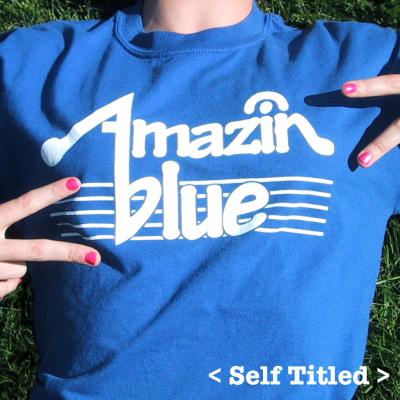 Given the direct and detailed feedback my last review for University of Michigan Amazin' Blue entailed (South U and State), one would hope to see a slight uptick on the group's next outing. But Self-Titled begins disappointing from the second the packaging comes off its amateurish album cover and liner notes, and the music inside is unfortunately too easy to judge by its cover.

The disc starts with a soloist straining desperately to handle the admittedly soaring chorus of Sting's anthemic If I Ever Lose My Faith in You. This sets the tone for the rest of the disc, with the men of Amazin' Blue tripping over themselves in attempts to capture the sound of the original performers of their tracks. The overly prim and proper cover of Maroon 5, in particular, had me alternately laughing out loud and wincing. Four capable singers dominated South U and State; a select few cover the majority of tracks on here as well, but with less success. Whitney Bashor, Alexis Sims, and Chelsea Krombach manage two strong ballads with energetic and somewhat creative twists (both songs were selected for BOCA in the past two years), but the rest of the work here is fairly forgettable.

One of Amazin' Blue's past strengths, repertoire selection, seems to have deteriorated as well. Self-Titled is a hodgepodge of genres from the Beatles to Christina Aguilera to the odd and not particularly amusing Waffle House. The diversity doesn't help the group but instead contributes to the sense that the singers are throwing various things against the wall in the hopes that something will stick. As in the past, the slower songs tend to work better than the upbeat ones, which range from exceedingly average (Solsbury Hill) to truly painful (the lurching, poorly tuned Bring Me to Life). Given the group's track record, I would suggest that the group continue to emphasize its strengths in future song selection.

The most worrisome addition here — the live version of I Feel the Earth Move. Why would you do a live-in-studio track when it only showcases your lack of tuning and blend, and fail to mike the sound properly (e.g., the buried call-and-answer backup vocals)? And the random inclusion of Outkast snippets? Totally lost me. Live tracks for me should showcase the energy and beauty of the group sound with a "Look, ma — no hands/production!" element as well. This track did none of the above.

The best work on this disc threw me off. After suffering through so many mediocre or poor tracks, I was suddenly treated to a smart and nuanced solo with tightly tuned chords and strong percussion work. Talula (Valewe Remix) is done in full-on dance-party style, with stuttering echoes and various effects thrown willy-nilly into the mix. It worked quite well but sounded nothing like anything else I had heard thus far, and yet it was oddly familiar. Upon looking at the liner notes, I realized why — this track isn't the same group of singers. The current members had simply taken the version of Talula from Raising the Bar (a phenomenal disc) and just remixed it in the purest sense of the word. The idea in itself is not fundamentally flawed, but the end product here only serves to place the groups of past and present in direct comparison. That is a scenario that the current singers should not actively pursue, for obvious reasons.

I wish I had nicer things to say here because I have a lot of respect for Amazin' Blue of old and keep hoping that the downward spiral I have heard over the past few years will be reversed. My hope springs eternal.

Self-Titled is disappointing and disgruntling. It's markedly less mature and polished than South U and State, partly because the group has almost entirely forsaken the genre that inspired its name. The scatted The Pink Panther Theme and sprinklings of scatting and dissonant chords are the group's only nods to its jazz forte. Self-Titled embraces pop, rock and a little R&B, covering mainstays like The Beatles, Peter Gabriel and more recently overdone artists like Maroon 5, Sarah McLachlan, and Evanescence.

While the album is disappointing as a whole because of its slide from the quality of its predecessor, individual songs are disgruntling because of their arranging. Without the time-honored dictates of jazz classics, Amazin' Blue seems not to know what to do with itself and loses arranging discipline. If I Ever Lose my Faith in You has a weird scat section. I Feel the Earth Move has a silly "Hey Ya!" breakdown involving Polaroid pictures. The song also features some awkward, mushily delivered scatting and a puzzling "you say potayto, I say potahto" interjection. Amazin' Blue seems to find it difficult to keep a straight face, lacking the discipline to do songs both straight and well. Even the album's one jazz song ("Panther") has an out of place madrigal "amen" in the middle of the song. The constant interruptions in these songs break up the flow, preventing them from achieving catharsis.

Most of the album's soloists completely miss the pop/rock style. Several repeat soloists sound like dinner theater singers with huge vibrato, flawless enunciation, or sometimes piercing, laserlike tone. Others just don't have the voices to fill their songs. Though very prettily arranged and reasonably well sung, I swore that China was lifted directly from Broadway until I saw that it was a Tori Amos song. The soloist's phrasing and style is classic show choir ballad. Her vocal tone is warm and womanly on low notes but gratingly edgy as it bites laser-edged into the highest ones (same for her performances on Soar and I Feel the Earth Move). Eleanor Rigby's soloist sings with the necessary urgency but overdramatizes a bit, chewing particularly hard on the endings of words like "church" and "grave". "Lose My Faith" sports an Irish tenor who decorates more sensibly undecorated words like "politicians" with R&B flourishes. The style is incongruous.

While these few soloists clearly have style, albeit inappropriate for these songs, the album lacks strong solo presences. Peter Gabriel is reedy, not beefy (and often sharp nearing the end of the song). His earlier performance on Harder to Breathe is clipped, shouty, and almost Eminem-like at times. The composer and soloist of The Groove has a warm if unrefined tone but turns woodenly through his often trite lyrics. Another Bring Me to Life cover is shouty and girly; the soloist has nowhere to go after the first chorus and simply belts her way through the end of the song. By far the best solo performance is during Waffle House. The soloist's tone is big and manly, his expression sardonic and well aware of the song's tongue-in-cheek irony.

Anyone who's seen dinner theater knows that the libretto never calls for blend. This album's Amazin' Blue sounds like a collection of dinner theater singers. The group sings with energy and impact but hasn't grasped how to blend those bright, energetic pop/rock syllables. Individual singers, usually women, poke through the mix, sometimes startlingly ("Faith", The Groove, Soar). The guys aren't innocent either, blasting through parts of "Faith" and "Earth". Bad blend renders a few dissonant chords of "Panther" noisy instead of jazzy.

Self-Titled's liner notes offer another clue to the rough feel of the album as compared to South U and State. Amazin' Blue recorded the album in a studio but credits its own singers with mixing. This may explain the lack of compression to soften belted higher notes on solo lines, exacerbated blend due to panning, the cold, brassy tone of some soloists, and the artificial vp.

I repeat: stick to jazz. South U and State was a solid album, with many moments of greatness, nearly all of them during jazz songs. This album, nearly all pop/rock, is simply not as good.

Oh, Amazin' Blue, divas of the collegiate a cappella world. I bow to your kick-ass soloists, both male and female, to your unflawed vocal percussion, and to your solid (albeit sometimes mechanical-feeling) arrangements. And you're all hotties, truly. But not to be judged solely on good looks, Self-Titled has garnered two well-deserved CARA nods: for group sweetheart Whitney Bashor's skillful performance of Christina Aguilera's Soar (I'm looking forward to a solo release, Whitney), as well as for the arrangement of AB's newest BOCA track, Angel, executed as a collaboration between Josh Duchan and Kate Bowerman. Well done, AB.

With all that's well and good about Self-Titled, I fear there's something a bit formulaic about the tracks here that make them slightly overworked. The up-tempo songs are energetic and well-arranged, but they don't quite feel "with it", possibly the result of multi-track recording. It's a little frustrating because the album culminates in what I feel are really the best two tracks — I Feel the Earth Move, a raw, untouched live version excerpting "Hey Ya!" and a jazzy scat interlude in the middle; and Talula (Valwe Remix), this time an electronica/trance remix of their original 2000 song that aptly concludes this otherwise disjointed disc. There are a few other songs with scat "voice-trumentals" as well; some work better than others. One such song is The Pink Panther Theme, although the overlapping voices get a bit tiring, aurally confusing, and feel overdone. The voice-trumental heard on the disc's opening track just serves to overextend the song time-wise and causes a few tuning issues not resolved until the final repetition of the chorus.

The two BOCA tracks (Angel and last year's China), both ballads, fare much better and highlight everything fabulous about AB: their women. These songs feature a much cleaner blend of background vocals and unimposing vocal percussion, and simply put, don't BS the listener with cloying pop-imitating arrangements. The gals belt their lungs out, and rather effectively at that. All of the men, by contrast, sound a little too forced on their solo appearances. The arrangements are fairly solid, although there's often a lot going on at any given time.

While I didn't love the album entirely, it certain made a nice soundtrack on my recent road trip up to Ann Arbor from Buckeye country. All school rivalry aside, Amazin' Blue's latest release is fairly solid. Excellent production certainly makes up for its only slightly-better-than-average execution, however, some songs still feel incomplete or underworked. The ass-kicking Guang Ming Easlon referred to in her review of AB's last album, South U and State, is still as of yet unheard. Listening to Self-Titled I found myself yearning for the days of , still AB's finest album to date. This current album comes in just under the high standard set by that riskily-titled compilation.