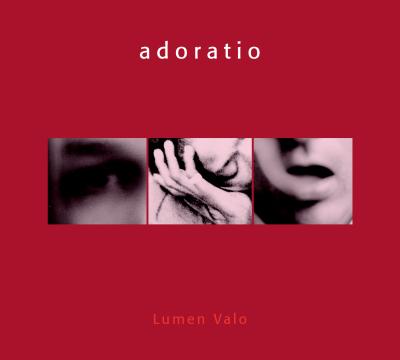 I've often wondered how Scandinavians occupy themselves during the long nights of winter. The eight core members of Finland's Lumen Valo, along with eight other assisting performers, show that one productive activity is learning to sing impeccably with one another. This chamber ensemble is stunningly polished, rendering its latest album, Adoratio, a pleasure to listen to.

Lumen Valo's tuning is nearly flawless, and the blend is beautiful. They sing with quite straight tones, which lends them a very smooth ensemble sound, yet they also maintain a very human and expressive sound. The group also recorded in the Riihimäkj Garrison Church, a space that apparently provides the group with a very warm and smooth reverb that matches its repertoire well.

The repertoire on this disc is pulled from vastly different time periods (contemporary works by Estonian and Finnish composers interspersed with 15th century carols from the Fayrfax Book), yet the selections flow together well. The pieces all employ long lines with gradual ebbing and flowing of energy, and these singers are quite talented at bringing a peaceful yet compelling energy to this subtly moving music.

The disc opens and closes with pieces by Urmus Sisask, the first of which slowly but steadily builds on top of a bass ostinato, and the last of which begins virtually at a whisper and reaches a peak drawn seemingly out of the ether by long held notes (especially from the sopranos) that build and spin and hang suspended and timeless. Perhaps the most dynamic pieces of the album are the "Sieben Magnificat-Antiphonen" by Arvo Pärt (the tracks beginning with "O"). These pieces make great use of pedal points over shifting harmonies, and the emotional range is quite affecting, from the peaceful ambience of O Weisheit to the heavy solemnity of O Adonai, from the tragic beauty of O Schlussel Davids to the bliss and ecstasy of O Immanuel.

The other cycle that makes up the body of the album is the "Laudatio Domini" by Joonas Kokkonen, which starts with rhythmic whispering and opens up into a harmonically complex cycle of five movements incorporating many contrasting elements (soprano soloist against backgrounds, sustained notes outlasting and being rejoined by other parts, and groups of voices answering each other). After this cycle reaches its joyful conclusion, the album begins its settling end with a somber and calming carol followed by the wordless gentle build and release of the closing track.

Impressively controlled and exceptionally musical, Lumen Valo has produced a wonderful listen in Adoratio. It is a contemplative album, yet it eases into moments of rapture and ecstasy. I can only imagine that hearing them perform live would be nothing short of sublime, though until I find myself in the same vicinity as this ensemble, this recording will have to suffice.

Lumen Valo, a Finnish octet, offers a technically well-made but ultimately unfulfilling album with Adoratio, its sixth album and first release since 2001. While the effort at tackling an album with a majority of modern compositions is applauded, the overall uniformity and uninteresting presentation fail to make the album compelling in any way.

The group technically fares well. Tracks are uniformly in tune throughout. With some exception, singers offer a rich and well-produced tone. It is clear this is a group of professional singers.

Balance can use some work. The soprano singers seem to lack full vocal control. Their volume, particularly in the upper registers, buries all other parts and when singing loudly features uncontrolled vibrato. Because of this imbalance, the alto tends to need more power. The baritone part is also barely discernible and could be much more prominent. Diction is also touch and go, with plosives (k) and sibilants (s) prominent but liquid consonants (m, n) with almost no voicing.

The album's true failure lies in its lack of expression. The singers do not emote and evoke little reaction from me. This is not totally their fault. They tackle some of the most difficult repertoire to present with heavy reliance on little-known European esoteric and avant-garde composers. They manage a decent show of it with Sisask's Deo Gratias, an interesting composition based on the movement of celestial bodies. Having sung the composer's longer work "Gloria Patri", a 24 movement piece with only six pitches, I know the difficulty of the music and its tedium.

This minimalist approach follows throughout the album, and does Lumen Valo little justice. With a few exceptions (note my comment on the sopranos above), dynamics come in two varieties: soft and very soft. There is an almost complete absence of block chords or more than two parts moving together in harmony. Dissonance is heavily used. And throughout, the ensemble just doesn't seem to have its heart in the music. Lines have no arch, no ebb and flow. Dissonances are not leaned into or expanded. If one could program a MIDI file with real human voices, the sound would closely approximate this album: tonally well-produced but without any inflection, alteration, or change in presentation. Well sung but boring.

In the end this album fails because of the disinterest of the singers. Not once in the album was I ever gripped by the beauty of the music, the emotion of the voice and harmonies, or the power of the interpretations. The final result is a boring and forgettable album. I look forward to an album with a little more soul from the group in the future.

Lumen Valo's Adoratio may very well contain some of the best classical singing I've ever heard. The only problem is, you can't hear it.

Yes, that's right. There is no reason whatsoever to doubt that this Finnish octet has conjured up nothing short of the greatest beauty imaginable in the choral genre, except for one — it's just not loud enough. Blame the sound engineers, blame my pop-accustomed ears, or blame the sonic limitations of my various CD players (headphones, boombox, and car radio). Blame all three, I don't care! Wherever the fault may lie, what it all boils down to is that a very significant portion of the musical excellence (of which there seems to be plenty) on this disc goes largely and dissappointingly unheard. Most of the album sounds distant — like when you are sitting in the very back row at church (was this where the mic or mics were placed?). Except for a few truly loud moments, the majority of the album's sonic output simply does not fill the space in the way that this reviewer is accustomed to. The album makes you wish your ears could squint the way your eyes do, in order to sharpen your appreciation of all the good things you're pretty sure are going on.

Loudness or no loudness, the singing itself is first-rate. The phrase "consummately professional" comes to mind. Incidentally, the last time it was utilized was in my only other review of a Finnish group — my '04 Pick of the Year Joulu by Rajaton. The phrase is called for in equal measure for Lumen Valo, if not more so. The two are somewhat comparable, in that Adoratio is similar to the classical-repertoire second disc of Joulu. However, Adoratio tackles what are clearly some supremely complex works, harmonically-speaking. As an example, the color tones and complexities of Woefully Arrayed are performed with apparent ease. Although the aforementioned problematic recording style often makes it difficult to hear all the myriad subtleties, the group's command of the material is unquestionable.

Aside from the volume issues, the performances on the album are thoroughly excellent. Since there were no soloists, I gave a score of "5" to the Soloist category since each voice is a soloist in a way. There were a couple of highlights: Woefully Arrayed, a light, surreal piece with lively dynamics; the album's haunting opener, Deo Gratias; the cinematic O Spross aus Isais Wurzel which was the album's only truly loud work.

It would be wonderful to see the group incorporate a close-mike style. Currently, the anachronistic church-style recording does not allow the group to showcase its obvious talents to the fullest extent. The group deserves a robust, thick recording. The group's musical aptitude is understood loud and clear — hopefully, the next recording will be loud and clear, as well.