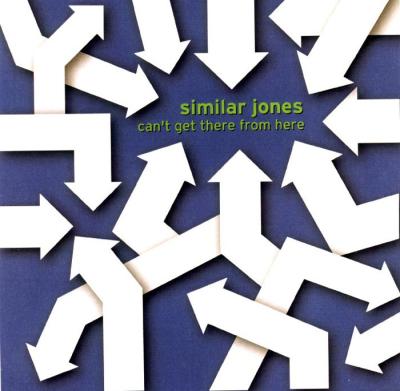 There's some great stuff on Can't Get There From Here, the second album from the Northeast's Similar Jones. Solid block singing, good leads, slick production (done by group member Ben Cohan) and really nice arranging make for a worthwhile listen, though stylistically I find it mostly forgettable.

There's clearly a lot of talent in this relatively small post-collegiate group. The tuning is great and each part of the block seems to understand how it fits into the whole of the song. They also groove together quite well, which is a great thing to find in a soul-influenced pop/rock vocal band. They have great arrangements that use their voices and energy well with nice textures and layers. They remain interesting without getting overly busy. The leads are all quite good, though there are few real standout moments. The two women of the group are more engaging as soloists, bringing more sultry, smooth, and soulful strength to their leads than the two men who solo on the album. They also do better when they don't try to get edgier than they are. Brick House and the higher points of Future Love Paradise sound a bit out of place for the smoother sounds of the singers (but they get bonus points for quoting Sexy M.F. and Jungle Boogie in the arrangement of Brick House).

With all the talent in this group, I'm disappointed that the album didn't win me over more than it did. Five of the eight tracks are originals (four penned by group members and one by Samrat Chakrabarti), and unfortunately they do little for me as songs. They're inoffensive and clean, and generally either too poppy or just kind of forgettable. They sound pretty good while I'm listening to them, but I don't find myself humming any of the melodies or really itching to listen to that hook one more time. Cholesterol is a weird one; I like the jazzy chords and the tight feel, but I can't stand the lyrics (it boils down to "your love is like cholesterol: bad for me but tough to resist"). I have a feeling it might be really cute live, but I wish I could just tune out the lyrics and dig on the remainder of the composition.

The real winner of the album is the closing track, Bill Withers' Grandma's Hands. It features a phenomenal solo from Reena Freedman, and energetic and engaging work from the backgrounds. This is the kind of tune the group excels at: it's soulful, it grooves, and they sound comfortable at all dynamic ranges that the tune calls for.

Similar Jones did so many things right in making this album, from the singing, arranging, and production to the wise decision to put only eight well-polished tracks on the disc. I am excited by what I'm hearing here, and I hope the group's songwriting catches up and matches up with all the chops the group's got.

Similar Jones gets it just right with its latest release, Can't Get There From Here. The six member, semi-pro group from Boston delivers one of the most solid a cappella albums I've heard in a long time, an album both exquisitely made and a pleasure to listen to.

These guys really groove and jam. All parts consistently work in tandem with each other, and there is a clear vision through each track. There is a flow between the vocal parts reminiscent of some of the best Motown bands of the 1960s and '70s, with cohesion, clear and well-produced tone, and lots of energy.

Vocal production is simply top notch. While I was listening hard, I didn't find an out-of-tune note on the album. This is achieved with close-knit harmonies, parts moving in conjunction with each other, and keeping women out of the tops of their ranges. Blend is great as well, with perfect vowel unity, no part overpowering another, and a unified sound.

Engineering and production are stellar. While even the more organic-sounding tracks have likely had a little studio help, the album has a fullness of tone that is missing from less well-executed tuning effects. Extras are appropriately placed, with excellent and appropriate use of computer distortion, sampling, reverb, compression, and chorusing effects. Parts are never so altered as to be unrecognizable, and the contrast between more organic-sounding lines and engineering enhancements keep the tracks interesting. Percussion is good but not distinguished.

Best of all, the album is made up mostly of originals, and this group has some great songwriters. The opener, So It Seems, written for the group by Five O'Clock Shadow alum Samrat Chakrabarti, has a sultry groove making me think of Guster, while the poppy Cholesterol reminded me strangely of Tenacious D's Wonderboy (go figure). Covers are also expertly arranged, with interesting parts, great syllable choices, and tons of energy.

Soloists are good, but fare less well in comparison to the overall aesthetic. Opdycke and Lawson deliver strong solos, but Sacco and especially Freedman, who sounds like a trained vocalist imitating an approximation of soul, felt pleasant but not compelling.

Overall, however, this is a truly remarkable album that was a pleasure to review, and one that is certain to elevate the genre. I look forward to the group's next work, particularly the fine songwriting.

Similar Jones' Can't Get There From Here is a sonically pleasing and rather benign compilation of adult contemporary pop rock. While this, the group's second album (recorded with only two of the original members from its first release, So It Seems), offers power chords, great solos, and expert vocal percussion by, I assume, Mosaic Whispers alum Ben Cohan, I'm not totally impressed with the album as a whole. Most of the arrangements reek of old school Five O'Clock Shadow — indeed, the first track is a Samrat Chakrabarti original — and fare only as mediocre. Everything presented here is safe, and very un-risky.

Don't get me wrong here. The execution and production are top notch, to be certain, and a few of the album's original tracks are fine examples of self-written and -arranged a cappella. As a whole, however, I'm disappointed by the way everything seems to sound the same. I could probably see myself bobbing my head to the Similar Jones beat of the overhead music in a dressing room of a department store, but listening here in my apartment, I'm not quite rocking out.

One particular issue I have comes with Cholesterol. To me, it feels like a knockoff of the Barenaked Ladies' more successful Alcohol. BNL's ode to booze combines witty lyrics with wacky instrumentation, effectively creating a delicious musical drunken stupor. Cholesterol, however, does not sound like a heart attack. The lyrics, naively written and with simple rhymes, don't get the job done. Replace some of the lines and you've got a song about a guy trying to reclaim his ex-girlfriend.

I gotta give ‘em an A for effort, really. I'm guessing there are quite a few people out there whose socks will be knocked off by Can't Get There From Here, but I'm not one of them. I'd like to see Similar Jones take the plunge into some more difficult arrangements, go beyond the comfort of the contemporary genre and attempt some alt or classic rock. They certainly seem to have the talent to try. For the group's next album, a little variety and a little drama could help get me up out of my desk chair and dancing around the room.

Order online through similarjones.com, or call 888-Jones-88 for more info.