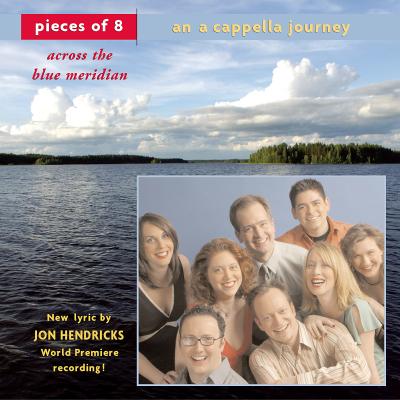 Predictable, bland, and ordinary, Across the Blue Meridian is a sophomoric, altogether unsatisfying listen by New York-based Pieces of 8. This vocal jazz compilation falls somewhere between smooth and old school big band, with most pieces sounding inconsistent, brassy, and slightly pitchy. A little more experimental than their last effort, Falling Together, this album tries to showcase its original compositions, but doesn't effectively achieve the "wow" factor it sets up for the listener.

Tuning issues raised by all three RARB reviewers for the group's 2002 CD have been addressed, but not completely resolved. Harmonies are tighter, blend is more concise, and the men hold their own against the stronger women. Charles Mead repeats his achievement as the sole arranger on this album, which works to both its advantage and detriment. There's a nice variety of Latin-esque pieces (Summer Dreamin') and old school (It Don't Mean a Thing), but even with the Mead twist on the familiar, the performances are not executed brilliantly enough to impress. With Mead as the only one arranging, the group seems confined, unable to express its true creativity. The one-track recording, aided by "the use of highest quality microphones" (with which I'm the first to admit I have no familiarity), really could have benefited from digital processing, for which the liner notes boldly claim "there was no need". I beg to differ.

The sleepy, droopy melodies of Some Other Time lag so much as to make me hit the track forward button on my CD player. The other Broadway piece (On the Street Where You Live), however, features a lovely, strong solo by Christopher Lewis that carries the song despite its near schizophrenic arrangement which teeters between swing and choral jazz. The a cappella mainstay A Nightingale Sang in Berkeley Square is properly breathy and has nice cutoffs, but misses many of the dynamics brilliantly carried out by the popular Manhattan Transfer recording. Music of the Spheres (Gershwin Piano Prelude No. 1) presents some of the cloying verse/word repetition appearing on Falling Together.

Listening to Across the Blue Meridian is like getting a dinner serving of Falling Together on better china. The taste's the same, but the packaging is a little better. With a more diverse repertoire, this album offers up only slightly more aural appeal with the same familiar vocals. I was disappointed to not hear anything new except a risky, and at most times unimpressive, attempt to expand beyond cabaret (Orange Colored Sky is one exception). I'm not crazy about this album, but here's hoping that the talent that's hiding behind the mediocrity of Across the Blue Meridian is given a chance beyond Mead arrangements and unprocessed recording.

Pieces of 8 has vocal jazz down pretty good. On Across the Blue Meridian, the group's solid understanding of multi-part vocal writing ultimately discloses a refreshingly instrumental approach to its material. Though the musicality is of a high caliber, questionable production choices and a couple of real clunkers littering the track list make this album a more difficult listen than it should be.

The overall sound of Across the Blue Meridian is extremely unprocessed: voices are left to fend for themselves, creating an intimate, personal listening experience. Unfortunately, the album is so unadorned that it sounds unfinished in some spots and like it's falling apart in others. The title track, which boasts an outstanding arrangement and execution, is practically ruined when the reverb employed in the intro to create a hushed, haunting mood, is suddenly switched off in the first verse. The effect on the listener is that of being transported from a space full of atmosphere and possibility, into a basement rec room where some people you don't know very well are singing in the corner. The song is redeemed by an otherwise perfect performance on the part of the singers, but would only have benefited had the original soundscape been preserved throughout.

The same cannot be said for the album's worst track, Hook, Line and Sinker. Here is a track that not only should have been left on the cutting room floor, but swept under the rug and out of sight entirely. The song migrates between lullabye-esque verses and choruses that shift jarringly into embarrassingly hokey gospel breakdowns. The bass, who on other tracks exudes the suaveness required of his parts, sounds like a fish out of water, flopping sadly about as he tries to keep up with the over-the-top showboating going on in some of the upper voices. Some finessing on the part of the engineer could have helped smooth the transitions in this song and also given those choruses the focus and drive they so desperately need. Though this is the most extreme case, most other tracks on the album are in need of a similar, if less extensive, reigning-in on the studio side.

And speaking of sweeping things under rugs: please don't include a hidden track on your album if you're simply going to repeat the track you opened things with. What on earth is the point of that, save to confound reviewers — er, listeners?

Despite such production bothers, the members of Pieces of 8 prove they have the chops to pull off challenging and original material with aplomb. The two closing tracks showcase the group at its finest. Music of the Spheres (Gershwin Piano Prelude No. 1) is the showpiece of this disc, a brilliant interpretation of the prelude indicated, featuring a dazzling array of vocal acrobatics and clever, effective use of lyrics as instrumentation. The Aria from Bach's Goldberg Variations unfolds with a measured restraint that respects the original material, and underscores the group's connection to it.

Across the Blue Meridian is a good album that could have been great with a little more touching-up at the soundboard. Attentive listeners and aficionados of the genre will surely find things to love about Pieces of 8's latest offering, but the average consumer might want to pass for something more stereo-friendly.

Across the Blue Meridian is a progressive vocal jazz album with imaginative arrangements and flawless musicianship. Any of the eight Pieces could cut a solo album. This kind of jazz precision can only be achieved through dedicated, continuous training, and you'll certainly appreciate their craft.

Unfortunately, good vocals can only take the vocal jazz genre so far. What we have here is eight bright-toned adults singing into eight very expensive microphones, with sparse percussion and very little production. This set-up creates a sterile sound that lacks color, warmth, and enduring value. You know how orchestras tune to the oboe's A440 because the oboe is straight-up pitch? Well, you'll find a lot of similarity between an oboe and Pieces of 8. Lots and lots of ... pitch. Since the group sings sophisticated music intended for the purist audience, I'm certainly not suggesting that they go for the electric guitar next time. But Pieces of 8 has had unfavorable repeat listenability comments from RARB since 1998. And they must be aware that their voices have an uncannily similar timbre, which makes their interesting harmonies sound quite ordinary. I'm just not convinced that the album's engineers understand that they're dealing with some of the best singers in America, who deserve the best soundscape to showcase their skills.

Individually, each Piece has a lot to offer. This is especially true of Christopher Lewis, who solos in On the Street Where You Live and Walk Between Raindrops. This man is a modern Frank Sinatra with pipes that will take you back in time, and a spirit that will leave you happy and hopeful. Across the Blue Meridian offers another jewel — when Music of the Spheres (Gershwin Piano Prelude No. 1) boldly arrives, full of invention and excitement, listeners will take note. "Music of the Spheres", a funky transcription of Gershwin's prelude, is completely original and completely engaging. Unfortunately, this standout is followed by the weakest track on the album, a dull and unpleasant Bach aria that sounds like a choral arrangement for a high school choir. The inclusion of the Bach aria on this album is hard to justify, but nothing is more baffling than Pieces of 8's decision to have a hidden track be the same song as the first track. Yes, It Don't Mean a Thing actually plays twice in a row if you don't stop the darn thing, even though it wasn't spectacular the first time around.

I have to wonder who is really calling the shots here. Most vocal jazz groups have a distinct sound, a distinct identity. The striking arrangements contributed by artistic director Charles Mead give Pieces of 8 a chance at this but, with weak production and no trademark sound, Pieces of 8 is anonymous. You never want a vocal group to be background music — when lyrics are involved, people should listen. Sadly, almost every track on Across the Blue Meridian works as ambience. The standards, which are plentiful, are nice but forgettable. Solidifying the anonymity is ambiguity about the role played by Mead, who is not only the artistic director, but also the sole arranger and co-producer. Does this mean Mead has full creative control of the group? Who is making the final decisions in the studio — Mead, Pieces of 8, or "Town Crier"? Given the hit-or-miss emotional connection Pieces of 8 has with listeners, it would be interesting to know if all the Pieces are in agreement over their albums.