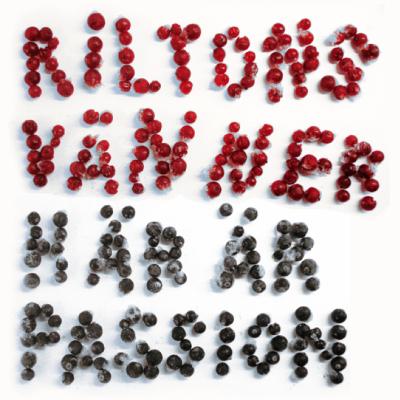 Riltons vanner's Här är passion demonstrates a remarkably radio-friendly sound. Their leads are evocative of Dido, or even the Cardigans, yet the sound is quite distinctly their own. English lyrics aren't exactly commonplace on this CD though, so be warned. I'm sure fluency would only increase one's appreciation, but without understanding much at all, I found the female leads on this CD absolutely charming.

The male leads are also good, but not at the same level. And since only 2 tracks feature male leads, the overall impression of the CD is one of delicate and powerful female leads over perfectly simple rhythmic backgrounds.

When a cappella is produced at this level, with catchy melodies, hauntingly beautiful leads and smooth production, it is easy to lose yourself in the almost crystalline sound. So often we're faced with endless cliche and flawed musicality. Not so here. If cliches abound, this monoglot is blissfully unaware. And the musicality stands squarely on its own.

Ranging from intimate and confessional to declarative, the emotional impact of the leads rests on the solid musicality of the ensemble and the delicate, respectful arranging.

I strongly recommend this CD to contemporary a cappella fans. I suspect you'll find that Här är passion has a universal appeal which surpasses the need for specific lyrical meaning and draws listeners in to a truly fresh sound in a cappella.

The co-ed Swedish quintet Riltons vänner's third and most recent release, Här är passion, is a well-made but essentially monotonous album that will likely receive a lukewarm reception in America.

The album, made up of all original materials and completely in Swedish (including the liner notes), translates as "Here is Passion," an unfortunate name for such an emotionally distant CD.

The singers' technical ability is fantastic. Everything is in tune, in tempo, and in sync, with an occasional slight tendency for the alto like to stick out of the texture. The blend didn't work for me: essentially a loud bass line that is so EQed that it sounds not even remotely human with a solo line, and then very distant background parts. My favorite tracks tended to be those with more prominent backing vocals, such as Inga ord and Schack mat.

All members other than the bass of the group sing some solos, from the ethereal and Beth Gibbons-esque Olsson to the somewhat doofy sounding tenor Lindgren. All their voices were pleasant, yet with the exception of Lindgren on Varldens starkaste man were completely emotionless.

My biggest problem with the album is its complete lack of affection. This album is the exact opposite of passion: a static, plain and distant delivery on songs that are too esoteric to evoke any passion in the listener. The writing is repetitive and extremely simple, the delivery deadpan. It's true that I can't understand anything they are saying, but from the way the songs are presented there is nothing passionate about this album at all.

Welcome to the hip Riltons vänner Sound Lounge, where the walls are red velvet and the waitresses only serve cosmopolitans. Classy and chic, but never pretentious, the music of Här är passion transpires out of trendy speakers shaped like snowflakes as a hush settles over the club.

The five members of Riltons vänner (literally, "friends of Rilton") achieve what few have, affirming Nietzsche's sentiment that "Without music, life would be a mistake". Their jazz has influences of funk, classical, and a touch of blues. Här är passion ("here is passion"), with a complex original line-up from non-group member Peter Björklund, is so touching, so achingly beautiful, that tears may spills down your cheeks despite the language barrier. Let it be known, something big is happening in Sweden.

The opening track, Längtar till sommarn, confidently showcases the most impressive and progressive aspect of this album: Sebastian Rilton and his amazing bass-playing vocal chords. I've never had any desire to sing bass before hearing Rilton. Who really wants to spend their time just thumping around on the root of a chord? But Rilton redefines the bass role, and the results are inspiring. Rilton makes his bass line as difficult as the harmony line, and as musical as the soloist line. His voice races up and down scales, creates unpredictable tension and excitement, and is as cool and luscious as the drinks on tap in the Sound Lounge. It might be overly dramatic to say, but Rilton's bass is profound. His drum is pretty sweet, too.

Also notable are the deliveries from the females of Riltons vänner, who devastate with their sexy, laid-back voices. The spot-on female trio carefully plays off one another throughout Här är passion, making the difficult motif in Folket från Eä seem like child's play and the inventive Poesi för snabbmatskultur seem as pleasant as the Swedish countryside. Daniel Greayer, talented as he is, doesn't match the sensitivity his female friends bring. Greayer's solos on the title track Här är passion and Världens starkaste man have a forceful, nearly Italian classical style that doesn't jive in the Sound Lounge. On a whole, the group shines the most on the funkier pieces, like Folket från Eä and the ultra-sultry Schack matt. If Daniel can find his soul button, and the group keeps pushing their arrangements further into the side of the unexpected, Riltons vänner should have no competition.

In case you're wondering, the lyrics are quite rich. Themes include Swedish winters and Swedish summers, and the coldness and warmth that can be found in either. There is also an admittance of the desperation that comes from loving too much. "Here is passion that doesn't look up. My blood sings... It doesn't stop until you hear." Riltons vänner has indeed brought passion — the kind of passion that makes you grateful and enthusiastic about being a part of the a cappella world. Please buy this album.

To order this album, visit Swedish Music Shop, A-cappella.com, or Primarily A Cappella.