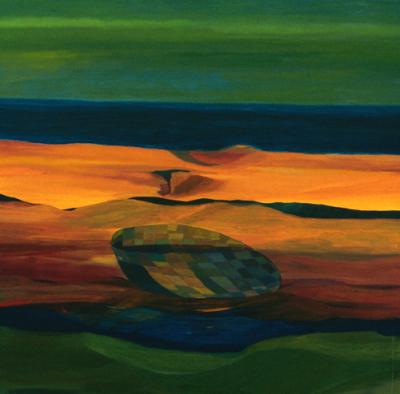 RARB reviewers uniformly marked the Yale Shades' last album Perspective as "better than good", but somehow disappointing in the shadow of the group's clear prowess and potential. Jumping on the Bill Hare mixing bandwagon seems to have helped some; I found this album to be tight and subtly done, and Hare's generally natural treatment of the Shade voices leaves us listening to a clean, glistening record. This is undoubtedly some very good music. If you're in a hurry, you can stop here: Sankofa is worth the listen.

Yet I would have welcomed just a bit of chaos and rawness at the expense of sonic perfection. As my fellow reviewer Rebecca Christie once noted, "real folk music is often powerful in its imprecision". Though the Shades bring more energy and commitment to the genre than many of their counterparts, I still lacked the emotion and awe that this music (and from what many people tell me, the Shades' live performances) can inspire.

Some aggressive self-editing could have helped kick Sankofa into the next gear. The sixteen-track album feels a bit long and could have lost some dead weight, especially with a number of songs stretching well past four minutes. The tracklist reads like a cross between Stanford groups Talisman (more traditional 'music of the African diaspora') and Everyday People (contemporary R&B), but Shades do better with the former. Though it takes less work to translate songs like Sweet Honey in the Rock's More Than a Paycheck or traditionals like Shut de Do, the group deserves credit for bringing real energy to the fray. It's too bad the more contemporary choices tend to falter, especially the largely forgettable male ballads. Where the Shades try to replicate the originals too closely, they can get overwhelmed by it all. Examples: the backup vocals on Real Love that fade off rather than ripping through, the flustered soloist and slavish piano tinkling on Impossible, and the all-female You're All I Need to Get By that turns into a bit of a soprano shriek-fest. One shining exception was Brown Skin, which has a driving pulse that sets it apart from the langorous original in a compelling way.

Upon learning from the Shades' website that Jamice Oxley and Offiong Bassey were no longer singing with the group, I promptly went into spasms of agony on the floor. Oxley gives a lovely, rich treatment to Brown Skin and More Than a Paycheck, while Bassey's version of Erykah Badu's Certainly transported me back into the jazz halls of yore. Her primal tones on the opener One by One didn't hurt either. Though there were some other nice solo turns (the soulful pleading of Kyle Mitchell on For You and Stephen Haskins' jazz work on Moody's Mood for Love come to mind), these two altos are a 1-2 punch for the Shades that will be sorely missed. At their best, the Shades sing with far more authority and ease than their years should grant them.

The Shades are one step away from making a breakthrough album. Until then I will have about half the tracks of Sankofa on repeat, skipping through the other ones, and hoping that Oxley and Bassey are blessing some other lucky souls with their peerless pipes.

Ahhh, actual soul. So nice. Soul pretenders sit down, the Shades are the real deal. With silky smooth voices and expressions rooted in soul and R&B, Sankofa unveils a group maturing toward greatness.

Sankofa is a more polished body of work than the Shades' last album, Perspectives, a colorful release marred by imperfect pitch and youth. While losing the charm of youthful exuberance, Sankofa oozes maturity, from beautiful cover art to classy and articulate liner notes to a rich and balanced mix from Bill Hare.

Perspectives might have been the most dynamic and vibrant album I reviewed in 2003. The range of volume the group covered in crescendos and stings, the potent contrasts of brooding to belting, and the intensity with which the Shades sang was exemplary. The group's hard work in rehearsal was evident, but the album clearly traded energy for technical accuracy, especially intonation.

While Sankofa is a technical improvement, with true pitch and splendid blend, the album is more reserved in its energy. Solos sound more rich, but less passionate. The soulful treatment of rhythms within phrases is very good, but dynamics are modest. Voices usually blend well, but enunciation is not as tense. One by One, from the Broadway show "The Lion King", and India Arie's Brown Skin are excellent exceptions. The background of One by One is glorious, with a chill-inducing chord structure. Brown Skin's soloist oozes sultriness, while the background is a study in how to craft R&B for the a cappella format. The VP is so good I didn't hear it, only felt it mentally, until I heard VP in the next track and wasn't sure what had just happened. The best song on the album, and one of the best I've heard this year, Brown Skin will grab you by the ears, spine, and soul and not let go until it's had its way with you.

The Shades have an unusual blend phenomenon. Most of the group has richly toned voices, deeply resonant and steeped in the rhythmic and tonal traditions of gospel, soul, and spirituals. Two voices do not fit within this tradition. One is an operatic coloratura soprano whose flowery vibrato, occasionally soaring counterpoints, and entirely colorful tone clashes with the earthtones of the rest of the ensemble. Her voice is utterly gorgeous — but sometimes out of place (For You, Impossible). Another is a bass, whose vocal tone sounds a little raspy and forced, like a guy clenching his cords to hit low notes with volume, squeezing resonance to the sidelines.

Bill Hare's treatment of the bass voice is unmatchable with groups like the Beelzebubs, but the octave lowering effects on many of the Shades' songs feels unnatural. Octave pedals enrich thinner bass voices, making them meatier as well as lower. With such resonant voices in the original signal, the effected signal sounds artificial at times (Certainly). Some bass octavated songs already feature overactive walking bass lines, sucking the ear into a muddy, unnatural, and distracting bog (laughably so in Good to Me (As I Am to You)).

Sankofa is a storm of heat, joy, and funk. The chills and thrills induced by the Shades on their emotional tour of black music makes this album a must-own.

Everything about Sankofa is so top-grade — the soloists, the arrangements, the sound, the thoughtful annotations in the liner notes, and the album's artwork — that I see retail potential here. Not only was I entertained by the Shades, but I was also educated by the Shades. The Shades have written that the literal translation of the word Sankofa means: "There is nothing wrong with learning from hindsight." The Shades go on to explain that "The Akan people, ascendants of several present-day West Africans tribes, depicted Sankofa as a majestic bird flying forth with its head turned backwards, symbolizing the need for the present to reflect carefully upon the past as it builds a new future. This embodies the sprit of the Shades."

Keep the majestic Sankofa in mind as you're swept away in this music. For isn't it wildly absurd, though wonderfully defiant of a bird, to fly forward while watching behind him? The extra-lively tribal song One by One will resonate more deeply if you revel in this bird's choice. Their incredibly sultry, steamy, satisfying rendition of Brown Skin will transform you into a puddle on the floor, while giving hints that the Shades aren't afraid of new heights. The men of the Shades enchant with Walk With Me, and the traditional tune More Than a Paycheck highlights the group's incredible maturity and respect for their heritage. The sassy jazz number Certainly is a real show-stopper, and For You is a creative, sensitive wonder. Finally, Shut de Do is a hopeful, confident song that fits perfectly before the Shades' incredibly moving tune Amen/We Shall Overcome. According to the liner notes, Amen/We Shall Overcome is a founding piece of Shades repertoire used to close all major concerts. I felt privileged listening to this medley, as I heard two paths of history crossing: African-American history and the Shades' history.

The ensemble's blend and pitch is so accurate throughout Sankofa that I'd love to observe a Shades rehearsal to learn how they perfect these areas. But unmistakably, the best part of this album is indeed the soloists who carry each song to incredible levels of achievement. Each and every soloist is so ridiculously good that they could easily sweep contests around the country.

The Shades are defying college stereotypes with their bold and unique selections, choosing to celebrate their roots while flying in new directions. I commend them, and can't wait for their next album.