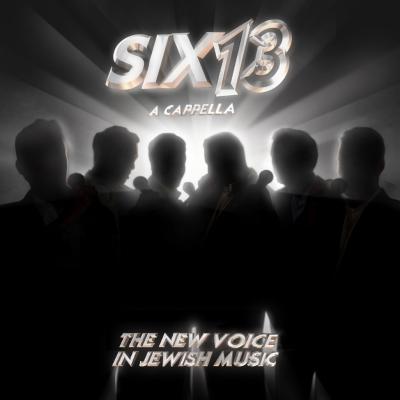 Six13 is the most accessible, enjoyable and talented Jewish a cappella group I've ever heard. With pop production values, perfectly performed, EQ-ed and sampled vocal percussion, big fat octave-dropped bass, and the delicious chordal tensions of traditional Jewish music, Six13's release is way better than "tov" (good). Be a mensch (good guy): buy it. No joke, you'll be doing the most rockin' hora of your life in no time.

Now, on the off chance that you don't like Jewish music or the chchcchchchch prevalent in Hebrew and Yiddish, this might not be the disk for you. But keep in mind that this is an artful fusion of Jewish music and pop-rock sensibility: Fiddler meets 'N Sync? So if any disc could convert you, this is gonna be the one.

Six13's leads are masterfully produced, but they have a throaty sound that on occasion could have benefited from a bit more dynamic and timbral nuance. The constant mezzo forte to forte, squeeze-it-out rock sound gets a little tiring after a while, but the consistently rich and creative arrangements always provide a very enjoyable distraction, and sometimes camouflage, if not an actual respite. But you can't say they don't have heart. This is a group that can stand and deliver.

Seven of the ten tracks are original, six of those penned in whole or part by wunderkind Mike Boxer. All the tracks are excellent. The ballads will pull at you. The folksy dance songs will get you dancing. And the entire CD is so well-programmed that you can easily let it run start to finish without the irrepressible urge to fast forward so often evoked by a cappella CDs.

No a cappella collection is complete without the best of each genre. That's reason enough to pick up Six13's eponymous release.

Sometimes reputations can do more harm than good. The self-titled debut album by "the new voice in Jewish music" Six13 falls prey to advanced and heightened expectations that comes with having a rising celebrity in the bunch.

Boxer is on his way to becoming synonymous with excellent a cappella music. His stint as an arranger and soloist with the Binghampton Crosbys is legendary. So, I was looking forward to listening to the newest a cappella endeavor led by him. I prepared myself to be blown away. Unfortunately, the preparation led me to be underwhelmed by the result.

The album is good, with a couple of strong moments, but is not the masterpiece I was expecting. Boxer's percussion skills have blossomed and his arrangements are generally amazing; Alan Zeitlin and Moshe Cohn and Shlomo Ressler are intriguing soloists and the group's sound is rich and booming. But there is just something slightly cloying about the project which keeps me from embracing it fully.

With the market increase for Christian pop, rock and hip-hop groups, it makes perfect sense that other religious-affiliated groups will create crossover recordings that appeal to a wider and younger audience. This New York-based Jewish sextet capitalizes on this trend with this album.

Most of their songs are traditional lyrics, Friday services or Shabbat morning prayers, set to a mix of contemporary pop, rock and hip-hop music in an innovative blend of reverence and conviction. The settings make the songs accessible to almost everyone, and the songs are universally appealing thanks to the creative arrangements by Boxer. The standout song, though, is an original penned by Zeitlin with music by Boxer and Zeitlin entitled Home. The bridges in Kol Mekadesh and Mimkomcha are also noteworthy for the cool backbeats that makes you want to dance. Ressler's solo on Eishet Chayil is sweetly haunting and nearly perfect. I didn't hear enough of him on this album. Fix that for the future, fellas!

While this isn't a must have for the general a cappellist, those of you who like your pop a cappella with a touch of world culture will want to check this one out.

Though the very concept of a Jewish album sung in boy band fashion is novel, the biggest boy band fault has not escaped Six13: all of their songs sound the same. Even with their unique tongue and distinctive spiritual agenda, one track blends into the next with few alterations to keep our attention. Given that three different engineers worked on this album, I can't decide if the consistent sound is impressive or disappointing. Since I was largely bored during my listens, I'll have to resign to "disappointing". The general form of a Six13 song goes like this: open with a traditional synagogue appropriate chant, bust out a slick rock beat with heavy VP halfway through, then go back and forth between the two. Sometimes this is quite cool. L'cha Dodi is completely radio friendly (language perhaps withstanding), and even dance club friendly. Other times, this predictable form gets so dramatic and cinematic that I'm convinced Rocky is about to take the ring for the fight of his life. Truth be told, Racheim had me cheering for heroes everywhere.

The album includes one English number, Home, which sounds closer to the contemporary a cappella we're accustomed to, but still keeps the intense spiritual passion previously established. For this reason, Home is quite pleasurable. Also quite pleasurable are the emotions of joy and hope, which radiate so fiercely from this music. It's obvious that the singers are emotionally committed to these songs and what this uplifting worship music represents, and in these rather gloomy days, I am warmed by their faith.

Six13 should playfully experiment with song form and sound production. Given their ensemble talent, I'm eager to hear their next album.

To order this album visit Eichlers.com. The album is distributed by Sameach Music, and is available at Judaica stores nationwide.