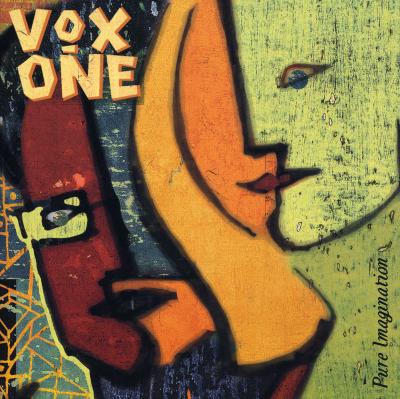 After years of wandering in the proverbial wilderness, the prodigal children have returned. Vox One's latest album Pure Imagination reunites the five members of this jazz(ish) mainstay of professional a cappella from their various individual endeavors. As far as I can tell, the years have been kind — this is still the Vox One we knew and loved, a group of such uniformly excellent singers that even their missteps tend to outpace the status quo. While Pure Imagination isn't a perfect album, it is worth the wait.

Past reviewers have noted/praised/criticized the genre-hopping that often marks a Vox One album. Pure Imagination runs the gamut as well, from pop/jazz originals to covers of folk standards to a North Indian chant. A word of warning: this is *not* music for the casual a cappella listener. But those who appreciate a good jazz chord and purist a cappella with few effects will not find themselves disappointed.

Vox One is at their best with ballads, particularly when Jodi Jenkins Ainsworth's crystal solos soar over the group's tight harmonies. Case in point: the eponymous album opener is a stunning interpretation of the Charlie and the Chocolate Factory classic, and the closer a heartrending original that left me breathless. The folk pieces Simple Gifts, Woodstock, and Aura Lee also work well by adding jazz overtones to familiar melodies. But the Stevie Wonder cover stumbles as the group replaces edge with cheeriness, and the improv pieces sprinkled throughout felt superfluous. Apparently these are a Vox One tradition in concert, but the tracks felt more like a parlor trick than logical additions to the tracklist. And a group this good doesn't need any smoke and mirrors to prove themselves.

In the end, Pure Imagination is an amalgam of some spellbinding music, and some inaccessible but impressive work. Not a bad return engagement, and hopefully only the forerunner of more.

Vox One is kinda out there — about a third of the time. Pure Imagination is a suitable name for this album, which combines the odd, the old, and the avant-garde.

The album is split into thirds, and the first three tracks set a commanding trend.

One third is re-arranged versions of songs you will think that you know well — when I say re-arranged, I mean in the way that Picasso re-arranged faces. Simple Gifts is sung in an alternative time signature and is highlighted by a Swahili chant. As each phrase progresses, this arrangement's melody and chords become less related to the favorite song of high school choruses. The song's bridge, a series of vowel sounds, are quite modern. Take Me out to the Ballgame feels quite out of place until Vox One unravels the original chords and reverse engineers them into some challenging, high-flying progressions.

I Wish, the Stevie Wonder standby, is the least re-crafted of the songs. With a wailing solo and the classic walking bass line, most of the chords match my memory of this song pretty closely. The horn stings are all there, though they feel top heavy and a bit thin. The bridge's tempo slowing allows for greater groovaciousness. Pure Imagination, the elevator-on-steroids ballad of "Willy Wonka" fame, features the warmth and clarity of the group's soprano, whose vocal sweetness is lovely throughout the album, if occasionally a bit too prominent in some chords. The group keeps things real on this song, essentially translating the original to the all-vocal format.

My favorite third of Pure Imagination is a time signature bending, chord warping, out-of-the-realm-of-normal romp through songs of the genre that college choir directors like to call "contemporary". This is high-minded contemporary, not the pop Top 40 schlock fouling many an a cappella album. That is to say that Pure Imagination is an album for thinking listeners. Vox One forces listeners to refer to the liner notes for explanation, not because we are confused, but because we are intrigued. Kind of a 3, for example, incorporates a spoken Hindustani phrase as the melody, and its syllables and rhythmic pattern are written out in the liner notes. Varying the vocal inflection and syllabic emphases, the group's vocal percussionist reveals that he is much more than a pair of studio tweaked lips. His mind-bending comprehension of the cadence, which he manipulates through several graduated tempo changes, is as impressive as it is fun to hear. Yet this is less impressive than when the entire group joins him on this spoken melody and nails the attacks and cutoffs as one unit.

The facelifts of familiar songs grant most of the album this otherworldly, alternate reality feeling, but Vox One takes things a bit overboard with five improv sessions. These strange pieces are internally coherent; we can understand why they go where they do, yet they range from likable to grating to just plain weird. Except as transitional filler and concept fodder for an album divided into thirds, I questioned their raison d'etre. Though not unreasonable for an album entitled "Pure Imagination", I think these tracks slacken a fairly cohesive album. I would keep such tracks warm on the back Bunsen of the songwriting laboratory rather than commemorate them to album.

A Vox One album taut with contemporary jazz and avant-garde fusion would be spectacular. Until then, be happy knowing that Vox One is tending to a cappella's musical minds.

So it turns out that beautiful voices can't compensate for average arrangements and an album seriously fragmented with improvisation breaks.

Vox One opens with their title track, Pure Imagination, enchantingly delivered by soloist Jodi Jenkins Ainsworth. After this song ends, skip over to their wonderful original Try and funky Stevie Wonder tune I Wish. Most listeners will be bored or bewildered by the rest. Take the aggressive and incredibly repetitive Kind of a 3, with forceful chanting that ruins the mood set by the previous track. And what self-respecting group throws Take Me Out to the Ballgame into the middle of their album? I like the Red Sox too, but some tributes just aren't disc worthy. And while I hoped they would, things didn't improve with their showcased improv tracks.

I can't say it enough: Pure Imagination would have been a stronger and more cohesive album without the strange improv breaks. Five tracks (six counting the hidden track) are devoted to improvisation, each with varying degrees of success and listenability. While the first improv break is actually quite pretty, it's hard to get into an album when it flips back and forth between nice music and, too often, jarring noises and weird vocalizations. Improv 2 is a quick track of breathing and small yelps. Improv 3 sounds like ghosts underwater for awhile. Or maybe ghost fish. These improvs would be best kept to live performances, since reception is key in musical spontaneity; a crowd's energy and reaction is needed to shape the direction.

As a seasoned group with plenty of awards under their belts, Vox One certainly has the collective pipes and experience to produce a better album.