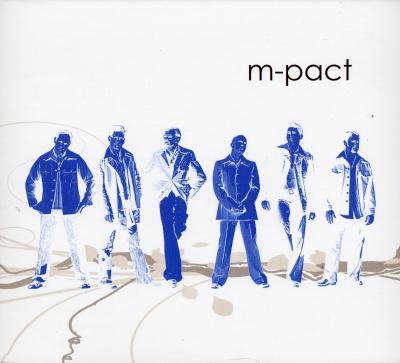 Change. Sometimes, a hard pill to swallow. One can and should expect growth and evolvement from the artists that you admire. The difficulty arises when the changes that happen within a group doesn't jive with your own wants and desires. Especially when those changes make you wax nostalgic for yesteryear.

Such is the case for me with the new self-titled recording by m-pact. The album is good, but I would be remiss if I didn't admit to totally missing the sound that was captured on the nearly perfect album, 2. Where once there was a group on the cutting edge of pop and rock, now there stands a group deeply entrenched in excellent but slightly staid, jazzy rhythm and blues. And it saddens me.

Marco Cassone's voice is the best thing about the group and the recording. His version of the George Michael classic Jesus to a Child is my favorite song of the year. The track is impeccable. There is a depth of emotion that wraps you in a comfortable blanket of safety and warmth. I wore out the rewind arrow on my iPodTM.

I Thought You Cared For Me and Almost Like Being in Love are standouts that reach the pedestal on which I've placed the aforementioned album. The first one has a snappy dance vibe that makes you bop along and swirl your neck — a dismissed lover ode akin to I Will Survive.

The second is a sublime cover originally written by Lerner and Lowe (two well-known Broadway composers) that eerily snags you as a simple dedication of desire. Marco and Bill Jerome wrote a poem, which undermines the sentimentality and plants a jaded 21st century spin on what it means to really connect with someone:

Here you are
Here I am
You ask the right questions
I tell the right lies
You pretend you're interested in me
I guess I'll settle for you
Beats another night alone, right?
So don't tell me your name again

That, my friends, is powerfully painful and so current. Wow.

I even like the jazz. I really do. Especially if they keep delivering it like Night and Day and Northwest Passage. Maybe they need to simply do musical theatre numbers. That really seems to tickle my fancy.

I know that groups have to change and I can't believe that I'm resisting it as much as I am. m-pact has meant a lot to me over the years. And I will continue to be a fan. I may not like everything that do or the direction they are heading, but I can't stop the evolution, no matter how much I want another First Steps, If We Try, Without Your Love, Fantasy, or 2. I'll probably grow to love this album, it's just going to take some time. The members of m-pact are great musicians putting out some fantastic music. That's something that will never change.

Seriously, when your album cover includes a quote from Ray Charles calling your group "sensational", what can a RARB writer say that isn't already said? m-pact is, simply put, one of the best a cappella ensembles out there.

Damn, this album is good. This time around, m-pact rarely strays from the general area of vocal-jazz. Tight harmonies flex tuning and blending precision. Songs tend to be rhythmically simple but harmonically complex. Forget the wide variety of syllables collegiate groups have been experimenting with. m-pact proves you can deliver a stunning product with simplicity. One of my favorite tracks on the album is a jazzed-up version of the R&B classic Baby I Need Your Loving. This song should be required listening to budding musical directors and arrangers out there on making a song your own. And the bass line is ridiculous.

There is precious little "bad" about this album. For personal preference, I sometimes found the laser-beam focus of vocal production and engineering a little shrill for my taste. I particularly didn't like the chorusing effects applied to My Favorite Things. My favorites tended to be mid-tempo songs where the percussion and bass line gelled into a slick groove, such as the aforementioned Baby I Need Your Loving and the fantastic opener You Need to Know. The writing is outstanding, and in many cases I felt the three originals outshined the covers.

Fans of m-pact have been forced to wait out their recording hiatus. They will not be disappointed with this self titled masterpiece. The group sticks to its strengths and the results speak for themselves. I'm especially looking forward to more originals in the future.

So buy this album. Play it for your friends (assuming they can make the mental jump from the slag that calls itself music these days). And enjoy.

The m-pact website boasts some important accolades. In case you didn't know, m-pact was the 1999 winner of Billboard's "Best Unsigned Band" contest. And, these members were named the Best Vocal Group at the 2005 L.A. Music awards. And finally, according to the back of their newest self-titled release, Ray Charles declared: "Lord, have mercy, m-pact — sensational!" Clearly, m-pact's contribution to the a cappella community is inspiring.

The latest release from the admired pop-jazz group strongly supports the above praise. What we have here is the slickest, tightest, most soulful album around. This is the first a cappella group I've reviewed where I didn't have to play the number game, in the manner of: is this track really a "3" or a "4"? It's the only album during which I didn't have to take notes on mistakes and weak spots, and the only album where I didn't say, "I liked that other group's version better." It is the only album where I could sum up the work in a single word: exceptional.

m-pact's sparkling countertenor-esque capabilities, boldly showcased and enhanced in the mix, is their trademark and hook. You'll love this approach on My Favorite Things, an infectious up-tempo track that makes the original seem dusty and dated, and on the snazzy, feel-good I Found A Love in You. The standard rich layering on every track will also please listeners, especially on Have A Talk With God and Over the Rainbow. It's hard to believe six voices are capable of this much. If m-pact were twice as big, we'd have to tie down the furniture.

m-pact's power of influence is limitless. Listeners will swoon and revel over m-pact's incredible precision, energy and flair. A cappella arrangers will try the impossible because of m-pact's mastery in what can only be called a harmonic obstacle course. Collegiate a cappella groups will cover their songs, and boys will practice singing into broomstick microphones, hoping for a chance to sing with m-pact when they grow up. Simply put, these guys are wonderful.