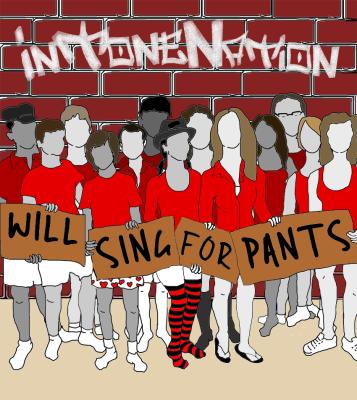 InToneNation is Montgomery Blair High School's student-founded and directed co-ed a cappella group, but you'd be hard-pressed to guess that by listening. This is easily collegiate quality. Sure, it helps to have Tat Tong on the mixing board, but recording via multi-track and avoiding the all-sing-around-one-mic is such a huge leap forward for these young singers, they couldn't help but blow away so much of the competition. This isn't as original and groundbreaking as Ascending Height, but it leaves most high school a cappella in the dust.

That said, even casual listening reveals that these are indeed young singers making their way through the murky waters of recording. Some singers do sound experienced beyond their tender years (notably, the talented Nathan Bluestein on Free Fallin' and It's All Been Done), but many sound like the freshly minted singers they are. Strong effects and lots of mults make that less of an issue in the backgrounds than in the exposed solos. When the soloists had to stretch to get the feel, rhythm or tone right, it pulled the listener away from just enjoying the songs and that kept some scores a little lower.

The arrangements range from standard fare (Smooth Operator) to highly effective (What's Golden). When they do go awry, it's often because they make the songs sound a little more square than the originals, particularly rhythmically. Thankfully, the strong production of Mr. Tong on songs like Free Fallin' and What's Golden shoots an electronic jolt into the tracks. But that's not to take credit away from InToneNation: What's Golden is a kickin' track with one of the most believable raps I've heard on any a cappella release. Age be damned, no producer can give you that feel if you didn't already bring it. And Samir Paul brings it.

InToneNation is absolutely on the right path. Their toughest challenge will be in passing on the knowledge they've accumulated in the making of

Pants is eclectic in style (jazz, alternative, classic rock, 80s, 90s, and 2000s pop) and high in energy. InToneNation's fans are going to love these tracks (though some more than others) for years to come.

It's hard to be too critical of a group whose lines notes begin as follows: "This album marks a major milestone for InToneNation. It's not perfect, but we consider it the next step in our evolution as a group. This is the first time that we've taken advantage of contemporary a cappella recording techniques rather than just setting up a microphone and singing".

Ain't that sweet? Throw in that InToneNation is a high school group (Montgomery Blair High School), the group is older than many a college group (going back to 1995), and the group has released seven prior recordings, and it's kinda hard not to root for them and say nice things.

Having not heard any of the prior work, it's hard to draw a comparison and assess how far the group has or has not come, but looking solely at the finished product on its own merit, the group's "modernization" of its sound yields promising, if not entirely compelling, results.

"Slick" is not a bad word to describe this CD. Having been mixed to a polished shine by Tat Tong, the tracks have a manipulated feel — a gloss that gives these teenagers an almost inhuman sound when singing as a background block. But OK, that's nothing new and they can't be faulted for jumping on a bandwagon that so many college groups are already leading.

So what of the music and the performances? The arrangements are thoroughly lackluster, save for a slightly more sophisticated It's All Been Done contributed by Emily Vincent of the Chorallaries of MIT. Without the sampled and sequenced VP, arrangements would fall apart completely with a sole, repetitive unison rhythm offering little in the way texture and depth on most tracks. What's Golden is essentially a studio track — nicely executed but an uninteresting listen — and She's No Lady is a nice attempt at vocal jazz but most notably is missing a walking bass line that doesn't move in union quarter notes with the inner voices.

From a performance standpoint, the members of InToneNation have a solid ensemble sound that is not without its tuning imperfections in the inner voices, despite whatever post-production work may have been done to minimize them. Not surprisingly for this age group, several of the solos — most notably on Smooth Operator — have a too-trained quality to them that is highlighted by hyper-articulated diction and a somewhat strident tone that betrays the "feel" of the song.

I can hear the boo's now. Give these kids some credit! Cut them a break!

The truth is that I would have given my left arm to sing in a group both as good and as prolific as InToneNation when I was in high school and their effort on Will Sing for Pants is quite commendable. They're talented, clearly having fun, and making enjoyable music together. But the liner notes are correct: they aren't quite there yet. While there are scholastic groups that defy their age and produce a cappella that transcends what might be thought of as typical "high school a cappella", InToneNation is not yet among them.

Why am I not surprised that this high school album sounds as good as some collegiate albums?

Free Fallin' opens Pants with gorgeous production and a warm wash of sound. Next up, Smooth Operator features a compelling soloist interpretation from Jody Pollock with funky support and percussion from Andrea Figallo. My favorite track is Saturday in the Park, a tune that features every member of InToneNation and still manages to sound cohesive. Since we're playing favorites, I'll say that I particularly loved the first soloist. It's All Been Done more than held my attention with its super fun arrangement from the Chorallaries, and What's Golden is a tight, playful rap that closes Pants perfectly. Overall, life seems good at Montgomery Blair High School.

That being said, my major criticism is hardly fair: they sound young. But InToneNation didn't do themselves any favors by tackling Lyle Lovett's She's No Lady, which puts the age issue in the bright spotlight with the lyrics "She's no lady, she's my wife." And Radiohead's heavy I Will is a bit out of reach. Appropriate repertoire is pretty huge in high school: what will work best with the sweet, bright voices? What can everyone sing without straining for notes? InToneNation would be wise to make this area a priority. Minor adjustments, like crisper articulation and a refusal to scoop up to notes, would also bring a more mature sound.

It's really great to hear this level of a cappella from a high school group. I'm definitely interested in their individual collegiate a cappella involvements.

For ordering information, visit the group's website. To order, email the group.