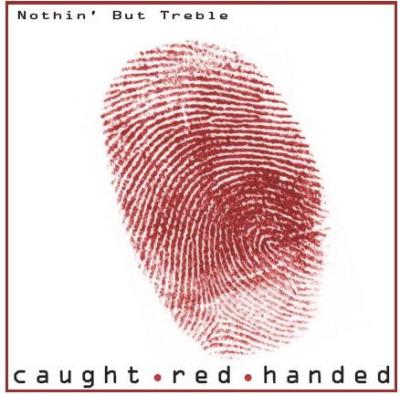 Georgia Tech's all-female ensemble, Nothin' But Treble (NBT), is a bit of a tease. This young group (founded in 1998) is out on the town with their first album Caught Red Handed. You'd be well within reason to expect the usual girl-next-door, 'we only sing mid-tempo' shtick, and for the most part you'd be right. For most of the album NBT are good girls with all that entails: slightly too slow tempos, repetitive backgrounds, and a pleasant but undistinguished group sound. Not exactly the stuff that wins CARAs, puts out leading-edge a cappella, or brings all the boys to the yard.

But every so often, we catch an over-the shoulder wink or a come-hither smile. An overly sweet Head Over Feet breaks into a comparatively jagged bridge. The perky energy of Unwritten devolves into a nice group anthem, but lacks the raucous call-to-arms feel of the original. I loved the swelling rhythms of Somebody for Someone, particularly on the shimmering end chorus. And NBT brings good edge to their Hush cover, which had me searching iTunes for the original (always a good sign). NBT wisely keeps their repertoire firmly within their soloists' grasp, a welcome relief from the determination of many women's groups to subject us to karaoke-style shriekfests of Mariah, Xtina, and so on. Still, only a few (check out the "4" track ratings) manage to also break out from the pack.

A few brave moments of flirting doesn't close the deal, and the majority of the work here is middle-of-the-road. I was surprised to see John Clark's name here. Much of Caught Red Handed feels just the tiniest bit listless, which is not what I associate with the bright and crisp discography of this top production engineer. However, more consistent arranging and energy would have given Clark more to work with in the first place.

Caught Red Handed isn't bad, but it's a solid step below what the cool girls are up to these days. So next time NBT, let your hair down and give us a little more sumpin' sumpin'.

A sweet-voiced soloist who can't reach her bottom notes renders unintimidating the spiteful, threatening lyrics of a country song about a Homewrecker. Literal phrasing and a too-cute-to-sing-ugly soloist strip all angst from the All-American Rejects' Swing Swing. Saccharine song selections like Wilson Phillips' Hold On, Extreme's More Than Words, and SheDaisy's Come Home Soon belie the album's name. Nothin' But Treble is easily handled; the group is caught producing a bland album.

Caught Red Handed is three-quarters love songs. It's not a stretch to say that most of the rock/pop canon could be categorized similarly, but many a cappella albums have survived such landslides of repertoire through creative arranging, alternative takes on solo voicing, and variations on sound production. Nothin' But Treble tends to homogenize songs with prettily voiced soloists, mid-tempo and mid-volume songs, and a constant, steady energy level.

Soloists don't lay it on the line, trailing off at the end of phrases or never really building to climax (Head Over Feet, Accidentally in Love). The vocal percussion mixing, sometimes too prominent and a bit more complicated than necessary, left me wondering if engineer John Clark was trying to compensate for the slackness of mid-tempo love songs. Five tracks, Head Over Feet through More Than Words, offer nothing more than competent, female a cappella versions of the original songs, and left me tuning out a bit.

Nothin' But Treble hints at the spiritedness its album title implies. I found the signature John Clark-ian mixing of Unwritten wafting unsolicited through my head during the two weeks I reviewed the album. Clark's disregard for blend, bucking a tenet of a cappella by focusing the ear on digitally tweaked individual voices, and using syllables as avatars for rhythm, is an evolutionary distillation of a cappella's founding concept: use the voice as an instrument. The soloist draws Natasha Bedingfield's song forth from the minimalist intro, and her expressive verse unfolds into an urgent chorus. Airy background vocals touch chords and release quickly, helping to snap choruses forward. Clark coaxes thumpy basslines from these ladies, and this song's "hroom" bass syllable and snappy percussion lay a faultless foundation. The arrangement of the bridge opens into a whole group chorus and clapping that reminds me of the bridge of Coldplay's popular Fix You. This song takes the greatest risk of Caught Red Handed, and it pays off. But what does it take to trust one of a cappella's top engineers? Twist my arm, ouch ouch.

So it was more promising to hear Hush. NBT infuses a feminine touch into this straightforward hard rock song without watering it down like Swing Swing, Head Over Feet, or Homewrecker. Distortion overlays the background rhythm guitar line while the soloist unveils a voice that's a little dirty, a touch evil. The group ends phrases gently rather than shouting through in a more aggressive style, and the soloist shows a softer side in the bridge. The group doesn't blast both barrels, but at least the soloist pulls the trigger on one of the two. More experimentation between strong soloists and background singers could teach NBT how to build energy into its songs.

Nothin' But Treble has potential, particularly in the hands of a thoughtful mixer/producer. This album shows a group limited by its choice of repertoire, and I hope NBT spends some time trying out some new musical styles.

For now, getting Caught Red Handed would not be something to be ashamed of.

The ladies from Nothin' But Treble have released an impressive, beautiful debut album.

Caught Red Handed opens with a very pleasant, easy-groovin' version of Unwritten, a track featured on Voices Only 2006. Apparently Unwritten is a pretty special song. The Nothin' but Treble website says, "NbT took a completely different approach recording this song since there was little time, and each part you hear on the CD was made up on the spot by an NbT member listening to the original version by Natasha Bedingfield." Crazy! Unwritten was the first of several excellent works, including richly layered and smartly arranged Fallin'. Startlingly unique More Than Words will likely cause a love-it or hate-it sentiment from fans, and beloved Blind Melon's No Rain is a great way to close any album.

I was pleased with their sophisticated arrangements, which were never boring and showcased their strengths by catering to their great blend and accurate, pingy upper voices. But the soloists on Caught Red Handed range from exceptional to not good, which makes it hard to assess the group's current and future potential. Their interesting arrangements certainly took the focus off the variable soloists, which worked well with weak soloists, but was doubled-edged sword for the strong soloists.

I've never been a fan of ultra-digital drumming, and the vocals on Caught Red Handed sit squarely on a foundation of synthetic percussion. I'm also worried about the sharp rise of errors on liner notes. It's never a bad idea to have every member of your group carefully proofread the sample before you order a thousand albums. Caught Red Handed lists three track 7s, and two track 10s. Even I'm embarrassed. There also seems to be a MIA "Swing" on the jewel case for Swing Swing.