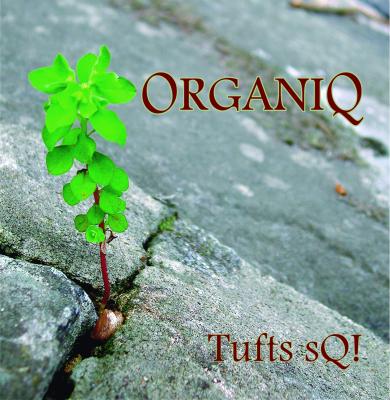 The latest release from Tufts sQ! is OrganiQ, recorded over a span of two years. On the whole, this album left me uninspired. The 13 tracks span over 45 years of music, and while the group performs its arrangements well, rarely does the group hit that sweet spot that makes you forget analysis and just enjoy.

OrganiQ opens with Fat Bottomed Girls and a soloist that is trying so hard it is almost painful to listen to him. Luckily, he redeems himself a few tracks later on Can't Stop, where he manages to capture the choppy wordy style of the Chili Peppers. The other male soloists do well with their easy listening covers, but there was nothing exciting about any of them.

On to the women: As a side effect to recording over the span of two years, we get to hear the development of Monica Gallagher's arranging abilities over six arrangements, culminating in the lush and textured Put Your Records On. Combine with Morgan Holland's record-company friendly voice and that makes Put Your Records On the standout track on the album on all counts. Monica also provides a solid solo on Goodnight and Go.

sQ! is less successful in their attempts to cover both Aretha Franklin and Etta James. Both soloists have young, thin voices and struggle for control. Like the men, the remaining female soloists do well with their songs, but like the men, there is no excitement.

Someone give these kids some Red Bull before they next record, and let's hope that they do a better job in picking their songs to better suit the soloists they have!

You can't see me, but I'm jumping for joy. With the release of OrganiQ, sQ! vaults themselves into the top tier of collegiate a cappella.

I didn't care for Overnight Delivery. I was disappointed with the group and with John Clark's decisions. But man, do I love OrganiQ. Kicking off with a tune that'll make you shout "Yes!" when the familiar melody starts, OrganiQ opens brilliantly with Fat Bottomed Girls. And you can bet your bottom dollar that you'll join in on the chorus of Queen's classic, led by absolutely exuberant soloist Peter Hugick. Transitioning from unbelievably fun to unbelievably smooth, Tufts sQ! shifts to Put Your Records On, where expert engineering and a tasteful arrangement seals the deal on a masterful track.

With little exception, the rest of OrganiQ marches on with advanced arrangements and precise production, carried by interesting and sensitive soloists and an a cappella group that has matured ten-fold since Overnight Delivery. A busily dense approach with hard-hitting vocals works perfectly for Counting Blue Cars, and electronica dance-like upper voices make Train Wreck and Goodnight & Go memorable and addicting. Speaking of addiction, I can't get enough of Leah Reitz's mellow but still driven delivery on Not An Addict, Hugick's spot-on Chili Pepper style in Can't Stop, and the transitions into the choruses of Train Wreck. And big props to John Clark for his stellar Cool arrangement.

My short-list of disappointments includes missing the dramatic guitar solo on Mayer's Waiting on the World to Change, a cheeky rendition of Respect that doesn't match the allure of the rest of OrganiQ, and a dull version of Still Fighting It. The list of noticeable improvements from Overnight Delivery include a balance between males and females, appropriate production, and beautifully woven drumming and rhythmic elements.

Remarkably executed, OrganiQ definitely belongs in your a cappella music library. The cover of OrganiQ depicts a strong-willed little green plant shooting out of cracked rock. It's a very pleasant image, but I'd say sQ! is now a mighty oak.

My congratulations go to Tufts sQ! for taking a solid step forward with their new release OrganiQ. From reading past reviews of their work, I gather that sQ! has been battling a lot of the same issues over the course of their last two releases, with their prior album Overnight Delivery beginning to show some promise. Well, a lot of those issues seem to evaporate as quality of soloists, production values, part balance, and quality of voices have all improved or been introduced, at least to the point where none of them seriously bothered me. Yet there's still room to grow.

I want to make note of one problem this group has battled that I think, while improving, is still hanging around: the disparity between male and female soloists, the latter being noticeably better. It's not a night and day contrast, but the guys do a lot of less-than-melodic shouting, and they need to up their game to meet the more polished standard the ladies are setting.

Okay, time for some new criticism, introduced with a story. Last summer I got a call from a good friend of mine who was producing an album that has since been released to quite a bit of acclaim. I answered the phone and was met by a raspy voice at the other end of the line asking me if I could come over and record some of the backgrounds for one of his tracks. I said yes, but asked him why he couldn't do it himself. It turns out that after 3 hours of singing his guts out to record pads of overdriven guitars, his voice was shot.

Now, I don't condone the "sing until your throat bleeds" technique, since I think there are healthier ways of accomplishing the same end. Nevertheless, that experience showed me where the bar has been raised to in terms of aggression and energy on collegiate a cappella rock tracks.

sQ! tackles a bunch of tracks in this style, and not one of them has the energy or force that they need to be exciting. Counting Blue Cars and Can't Stop are the two best examples. They both sound too safe and too contained. Can't Stop especially suffers from a bland intro and a weak background delivery that doesn't hold a candle to the Chili Peppers' signature vigor. Even some of the mellower tracks could benefit for some more of this kind of energy.

Overall I think OrganiQ is a great accomplishment. As sQ! continues to shed the problems that hold them back, I want to add energy in the studio to the list of things to focus on next time. They don't have to kill themselves to do it, but they should try to get a little more pumped and let that energy come out in their studio performance.