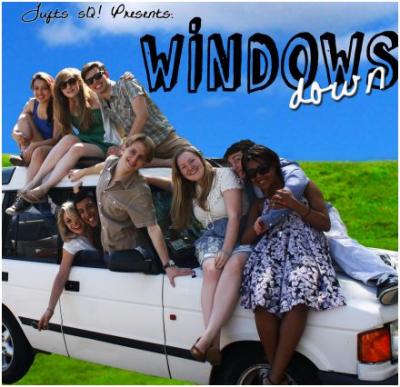 RARB album reviews don't often begin with song-specific comments. Whatever. Tara Vaughan's original 22 could easily be a huge summer hit. Catchy, powerful and honest, it's hard to know whether the writing, arranging, or lead singing is more impressive, but Vaughan's presence is a wow factor on Windows Down.

Ms. Vaughan is joined by several other standout leads making their mark with distinctive solos. Kristen Ford deliciously kills it on Oh, Atlanta, taking a moderately goofy arrangement and winning the day with a rich, soulful delivery. Ben Broderick utterly shatters the stereotype of the immature collegiate male lead. His whiskey-colored voice, hovering on the edge of abandon, makes the familiar Use Somebody sound as fresh and relevant as the day it was penned. Morgan Holland leaves the grit and gymnastics at home and tiptoes into our hearts with a quirky, earnest delivery on You and I. And finally, Vaughan duets with sexy alto extraordinaire Daymiris Gell for the powerhouse classic closer Can't Take My Eyes Off of You/Doo Wop (That Thing).

John Clark does solid production work as he integrates electronic studio effects into what obviously walked in the door as an acoustic, syllable-heavy sound. The Yeah Yeah Yeah Song is presented with sparse, impactful production choices, yet the arrangement (and even the mix) occasionally sounds like a mess of syllables and voices fighting each other. Cool effects meets wonky syllables meets engaging alternative solo. Credit is due for making it all work as well as it does. And though not everyone will prefer Clark's final choices on this track, listeners should agree that he does a truly remarkable job melding two utterly disparate worlds throughout the album.

Setting itself above many collegiate groups, Tufts sQ! gives us liner notes that show a real attempt to give credit to the copyright holders — and in these dark days of rampant, career-ending piracy, they deserve credit. The group could, however, benefit from a refresher course in just which copyrights need crediting as "RCA" and "Reprise" did not write any of the songs Tufts sQ! sings.

There are two copyrights in every recorded song: the sound recording itself, and the composition embodied in the recording. When an a cappella group records a cover, the group must credit the composers of the song they are covering, not the owners of the sound recording in which they heard the song. This makes sense. The group is not using the sound recording, only the composition. The group must pay a compulsory license for the use of the composition. It is this composer who is being paid via the compulsory license, and this composer who should be credited. Of course, there is no harm in additionally crediting everyone else whom you feel had anything to do with making the track. But the composers' names are, first and foremost, what we must find in your credits.

Fans will universally delight in Windows Down, and the best of its tracks are exactly the kind of summertime fun this reviewer was ready for.

Through my last several years of reviewing Tufts sQ! albums, I have continued to comment on the growth that this group exhibits, and how each album has improved upon the weaknesses of its predecessor. With Windows Down, it's not so much that the group hasn't advanced, but rather that the a cappella world around them has advanced so much further in the last few years than ever before. sQ! hasn't kept pace as well as some of its competition, and as a result this album (which is in many ways as good or better than Secret Handshake), still comes in solidly in the middle of the pack.

There are a few bright spots here and there. Oh, Atlanta is a nifty song choice with a solid lead from Kristen Ford. I feel like Ms. Ford's voice is treated a little too plainly in the mix and would have been made more impactful by a little more reverb to make her more epic — a minor quibble, but one worth noting. 22 is a pretty strong original song (which is always to be praised), and this one especially because it also happens to be perhaps the strongest lead on the album (turned in by the song's composer, Tara Vaughan). To be slightly critical, the song is good, but as a pop tune it could benefit from a stronger chorus hook. I enjoy the song while I'm listening to it, but I can't hum it back to you afterward. Pop choruses need to be stickier than that!

What's holding this album back from even being considered for the heavyweight category is a distinct lack of emotional contrast between songs. I've noted this before on sQ! albums; everything just sort of seems bouncy and happy. I'll buy this vibe on Oh, Atlanta, sure, but it's a lot harder to stomach on a song like Use Somebody. The arranging choices don't help, with a lot of "bow now" style syllables, and some really exaggerated vowel turns (the intro of Can't Take My Eyes Off of You/Doo Wop (That Thing)) that even the best group would have trouble singing with appropriate nuance.

That's really what separates the good from the great these days: tastefulness. For a while the game was all about getting the production right, and then it was about singing with energy. Now it's about singing with the right energy, and that's not as easy a task as hiring a talented person to turn the dials! sQ! just doesn't make a strong enough statement with its music from an emotional/creativity standpoint for me to be able to recommend it to the masses. Fans of the group will probably dig Windows Down, and a cappella enthusiasts may find a track or two that strikes a chord, but as an album I just can't recommend it.

The mixed group sQ! from Tufts has some great moments on Windows Down, but it also has some average ones.

Overall, the group has excellent soloists, picking singers who sound great on the songs they're singing. You'd think this would be easy, but so many groups don't do this well so I have to make sure to give kudos to sQ! here. Specifically, Kristen Ford sounds absolutely phenomenal on Oh, Atlanta  — she nails it with so much expression that this song is an absolute joy to listen to.

sQ! also does pretty well with song selection: if one can look past some of the overdone numbers (Use Somebody, Last Name), there are some unusual covers here, which certainly makes Windows Down sound different from other collegiate albums. The original song 22 (written by Tara Vaughan) is a fantastic pop song: super-catchy, great arrangement, great solo from Vaughan herself. There's so much subtlety in the background parts — here more than anywhere else on the album, these singers really execute great dynamics that enhance the song.

Where sQ! could use the most improvement is its arrangements and backing parts/syllables. Distracting syllable choices ("jow-now!") take away from Ford's solo on Oh, Atlanta. The group uses echoes of the solo at the beginning of Use Somebody (the women sound like they're singing "round, down, see, face, space, reach"), which drags the song down. Other songs, like Everybody Knows, The Beat, and You and I, just aren't memorable; the use of dynamics could go a long way toward heightening the intensity of some of these songs and making each section of the song sound different from the previous one. It's not a good thing for me to fast-forward from one chorus to the next and notice no difference (as I did with The Beat); songs need to grow and change, not have entire verses that can be skipped and end up in exactly the same place. The group does a great job with Sway —  there is some great texture behind the soloist, but I still would've liked to hear more quiet moments growing into louder ones.

One last note on the album. sQ! also takes its song credits only about halfway; songs are credited to a performing group, not the songwriter(s). Most egregious is the credit of Sway to Michael Bublé; this song was made most famous by Dean Martin in the 1950s, although it was originally written as a mambo song by the Mexican songwriter Pablo Beltrán Ruiz. Similarly, Can't Take My Eyes Off of You is credited to Lauryn Hill, while it was originally popularized by Frankie Valli in the 1960s (the song was written by Bob Crewe and Bob Gaudio).

Look for Windows Down on iTunes and Spotify! If you'd like a hard copy of the CD, contact the group at sqbooking@gmail.com.