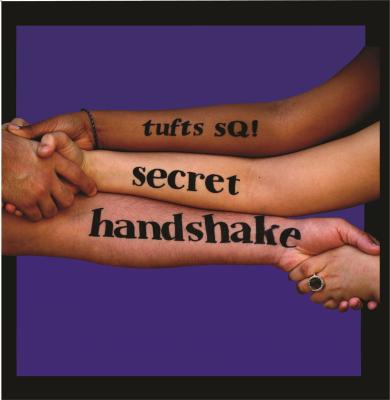 Like many, many collegiate albums, Secret Handshake has solid, clean production, average leads (with a few notable standouts), solid but not particularly inspired arrangements, some silly syllables, a lot of octavized bass, and non-stop cut-and-paste vp. That formula leaves accuracy and "fullness" fairly well-covered. Feel may be lacking but few are the moments of distracting pitch or rhythmic error.

For the most part, this is an album of fun songs sung because singing is fun. With few exceptions, that's Secret Handshake's level. As such, the dynamics of emotion, energy, phrasing and artistic meaning are largely ignored.

But some moments and some singers do bring more to the table. The lady leads of Always Be My Baby, Love on the Rocks and Cruisin' deliver unexpected flashes of excellence. Virtual Insanity perks our ears with its opening twist. Echo creates its own space with a hypnotic, electronic quality underscoring its heartfelt lead.

Not one for the ages, Secret Handshake is nonetheless an upbeat collection that's sure to keep sQ! fans tapping their feet and singing along. To add artistic vitality while maintaining their infectious exuberance — that will be a welcome feat on their next release.

Secret Handshake is a great album brought down by a handful of small missteps. Some, such as track order, are easily solved. Others, such as a cutesy approach to songs that demand real nerve, might take more time to fix. All in all, though, there is a lot to like about this album.

As I did when I reviewed their previous album OrganiQ, I have to congratulate sQ! on taking continued steps in the right direction. Where OrganiQ sounded a little too tame, Secret Handshake huffs and puffs, and blows the house down a little. Listening to the two albums back to back, it's clear that the group spent a little more time attempting to imbue the more aggressive rock tracks (That's What You Get, Here I Go Again) with an energy more suited to the style. Here I Go Again features a solo by Peter Hugick, who gets big points for tackling a song that's maybe a touch too high with enough commitment and "screw-you-I'm-going-for-it" attitude to sell it anyway.

Things get a little hairy when the group decides to back off of that spirit of commitment to opt instead for something more tongue-in-cheek. Candyman is a prime offender, effectively neutering the sexiness of Christina Aguilera's original in favor of self-censorship ("makes my cherry pop" is replaced with "makes my heartbeat stop" — interestingly the "panties drop" line remains intact), and generally delivering the whole thing with a goofy smile, rather than a coy wink. As a result the song loses its edge, the groove suffers, and the whole thing comes off awkwardly.

On the flip side, and to praise another soloist, Tara Vaughan absolutely nails her turn channeling Sara Bareilles on Love on the Rocks. This track is a real contender for best track on the album, and I wish it wasn't hidden in the middle. Similarly, Twentysomething is a nifty, unconventional song choice, but it's a bit too relaxed to work as an opener. As a listener, I want to be excited, or even elated by the first song. I want to be so thrilled that I can't help but keep listening. Twentysomething is cool, but it's just not that kind of song.

Secret Handshake is a step up from OrganiQ, which was a step up from everything else that came before it. This is a very good trajectory for sQ!, and it suggests even better things to come. Keep pumping the energy, work for a better balance in the set list, and I look forward to an even more polished future release.

There are many things that make up the gap between "good" and "great". On Tufts sQ!'s Secret Handshake, the difference is memorability: this is a pleasant album to listen to, but other than a few excellent tracks — the jazzy Twentysomething, Candyman with its playful sass, and the swaying, beautiful Mushaboom — not a lot of it sticks with me after listening. (Fair warning: as with Queen's original, sQ!'s take on Bicycle Race is an earworm that will get stuck in your head for days)

There are still some fantastic moments here. The background on Golden Train is lovely, as are the arrangement and the dynamics. The soloist on Love on the Rocks has a beautifully expressive way of flipping into her head voice. The same trick works less well on That's What You Get: on the line, "I still try holding on to silly things", the soloist sounds as though her voice cracks on "try", as she can't hold onto her chest voice on that word.

That may sound like just a nitpick — surely one word can't shatter the mood of a whole song. But it does. There are other mood-killing moments on Secret Handshake. Echo is well-sung, but its sound is too centered on middle voices, which leaves it sounding a little muddy. The syllables on Love on the Rocks are too harsh (dah! dah! dah! dohh!). The overly-repetitive ending of Cruisin' just goes on and on and on, with little change or build. Here I Go Again takes a little too long to explode into its powerful, full sound.

Again: these may sound like small details, but these are the details that, when changed, can turn a song from "good performance" to "really great, memorable interpretation." sQ! achieves the former on most of Secret Handshake. A few standout tracks show that they are certainly capable of the latter.

To download this album, visit iTunes or Amazon. To order a CD, email the group.