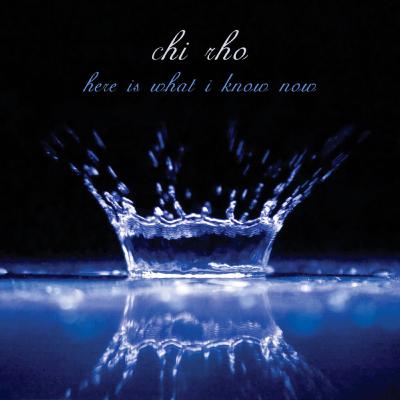 Chi Rho is a well-seasoned Christian a cappella group from Wake Forest University, and I was delighted to review such a thoughtful, well-produced, talent-filled album. The gentlemen of Chi Rho have created an album that is, first and foremost, a fantastic a cappella recording, with the secondary theme certainly upholding the fact that they're focused on the messages of Christianity and offering faith-based music to their campus and surrounding community.

In the past I have admitted to not rushing out to buy religious-based a cappella CDs (even ones that include my own religious beliefs), but this is an example of an album where the greatness of the music overpowers any "oh but it's not a genre I normally listen to" feelings I normally have. The song choices include Coldplay, U2, Stevie Wonder and Jars of Clay (one of the first big "crossover" Christian rock groups I had heard of). I realized after mulling through their song choices that the weaker songs on the album, which happen to be more choral and traditional Christian a cappella, earned lower scores not entirely because of a lack of quality, but because the original songs themselves simply aren't as interesting to listen to, and there's less variation within the arrangements. There's only so much you can do with a song with four chords in it for the entire progression, and when it contrasts with fuller covers that have more dissonances, layering and "sections" (instead of just verse/chorus), it's hard to compete.

The first five songs on this album are awe-inspiring. They each hold a rich sound without resorting to overproduction (sometimes a tool used by groups to hide less-than-stellar singing), and the distinctive emotion of each song carries through the soloists, the arrangements and the background singers. Shay Corbett locked me in from his first note on Chariot. This song was had the mark of a great soloist: when you can actually hear them smiling while they're singing about something uplifting. Another soloist that shines enough worth mentioning is Roman Irvin on Don't You Worry ‘Bout A Thing (it is truly an effortless, smooth-as-silk sound). A Message is a thoughtful arrangement — the overall arrangement has a direction and builds, and each part makes sense without adding too many lyrics or keeping syllables too repetitive. When you can hear phrasing in simple phrases like "jin JA da", you know that's from quality singing, not quality production.

This is not to say that Dave Sperandio didn't do a great job with production — most songs are balanced, allowing for the raw talent to come through, and production merely sweetens the sound. The overall mixing results in a warm, inviting sound for the listener. I did notice that on the simpler arrangements that are more choral, a slightly brash, tin-like sound was a bit irritating (Indescribable and Please Forgive Me), resulting in lower scores as well. There's a bit of auto-tune used carefully on some tracks (Word Of God Speak) but other songs have a bit too much that is distracting more than enhancing, like Eternal Father, Strong To Save.

It's no surprise that, in 2006, Chi Rho had many months where they had six or seven performances at churches and venues, and I am sure if their live performance is half as good as this album, they will quickly sell out of Here Is What I Know Now. This album is a wealth of good and great soloists, arrangements and production, and had an effect that I consider a mark of a great work — when music stirs and inspires any kind of emotional reaction.

Can I get an amen?

Let me just say, I was blown away by the men of Chi Rho, a Christian a cappella group from Wake Forest University. When I got the album, I thought that it was the product of a fraternity which had decided that an a cappella group was an innovative way to attract women. I was wrong.

Chi Rho has been around for around 15 years and has recorded numerous albums, but this is their first submission to RARB. I expect that we will be hearing more about them as the awards season rolls around, because this album holds its own against the top male college groups in this country.

Chi Rho's songs are selected from both secular and Christian artists, but all the songs teach the Christian message of love, faith, hope, and forgiveness. With the odd exception of Don't You Worry ‘Bout a Thing, which has a fabulous background and a middling soloist (who does much better on his second solo), every track on this album is solid and beautifully done.

While their song choices as a whole were quite good, there were a few times where Chi Rho slipped into Faith+1 mode (if you haven't seen the South Park episode where Cartman forms a Christian band, please do), that is, where the songs could easily be cheesy love songs. Why I Love You (You Are My Joy) offers these choice lyrics: "I can't explain the way I feel, ‘cause your love is oh so real, I've never felt this way before". But since it is covers, I guess I'll forgive them.

Anyway, regardless of your religious affiliation, Chi Rho is good a cappella and you should buy this album.

Chi Rho, an all-male Christian ensemble from Wake Forest University, has put together a very heartfelt, well designed, and well-executed album, Here Is What I Know Now.

Three aspects of the album really stand out: the soloists, the production, and the group's emotional investment. The soloists all sound very similar, but they are all solid and are pleasantly suited to their respective songs. Roman Irvin steals the show on I Want Jesus To Walk With Me, but all the soloists put forth excellent performances. My only complaint is that many of the solos exhibit an element of restraint. In particular, the soloists on A Message, 40, and Word Of God Speak never really cut loose. It is not really volume or range that I miss, but maybe just more salesmanship with respect to the thematic content. A vague criticism, but one I can't help mentioning.

A different form of restraint manifests in the production. Avoiding all but acoustics-creating or -enhancing effects, the production simply highlights the good singing on the album. Creating sonic cohesion on an album ranging from Stevie Wonder to Eternal Father is probably no easy task. The bass is thick, percussion hits hard, and the group's vocal character, while evident, is not distracting. The toms in the chorus of A Message are especially cool. The only real production misstep was Please Forgive Me. The samply percussion is too loud, the treble cranked too much, especially on the solo. Think sandpaper q-tips.

The group has clearly invested a great deal of themselves in this album. There is an endearing honesty to the songs, especially on the opening and closing tracks. Some of the tracks have more artistic merit than others — the lyrics on Indescribable are especially painful — but the gents from Chi Rho sell them all, sounding relaxed and comfortable throughout all their songs.

The arrangements are mostly neutral, not grabbing any attention, with a few exceptions. Why I Love You falls flat, but through no fault of the arranger. It's just a bad song. Four minutes of self-involved melody and harmonic goo, hovering around II for much of the song before cadencing weakly on I at the end. Palestrina is thrashing in his grave and foaming at the mouth. Don't You Worry ‘Bout a Thing and I Want Jesus To Walk With Me, on the other hand, deliver splendidly with captivating chordal motion and competent voicing.

Eternal Father should not have been recorded in a studio. Chi Rho should have found an acoustic space, a church or a hall nearby, and recorded it with a conductor. Instead, it sounds as if they recorded to a guide track. The rigid tempo destroys this track, and the dynamic intensity is lacking. There is not enough sonic differentiation between the group sections and the quartet in the middle. The basses are too bright, especially on the "ee" syllable, and too close. An impressive low G at the end, though.

Here Is What I Know Now is a very pleasant listen, and I can recommend it to anyone, regardless of spiritual background.