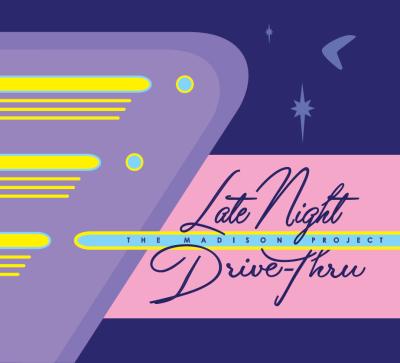 Let's hear it for a group that understands that one of the fundamentals of creating an artistically successful album is a keen awareness of how diversity should be used to your advantage. Late Night Drive-Thru by The Madison Project is full of little nuggets of greatness that go great together. There is a flow from one style to another with enough modulation in tempo that the entire album is like a late afternoon stroll through your favorite section of a park. A little bit familiar, but depending on the day, the eye (or in this case, ear) finds a subtle nuance that catches the stroller by surprise. The delivery is bouncy and the production makes each track sparkle like that last beam of sunlight.

Three tracks leap out at you as prime examples: Your Smiling Face, And Then You Went Away and Stay with Me (Brass Bed). Talk about a diversity of styles forming an incredibly emotional narrative arc. And I would have to congratulate the soloists Zach Gerg, Blaine Young and Drew Brittle respectively for connecting with and communicating the storylines of their songs so well. Gerg's devotion to the James Taylor classic is worthy of high praise. It has been a while since a voice has paired so well with a tune. He has a bright and slightly brash quality that captures the joy that comes with this song. Young's ethereal nature floats the bittersweet sorrow and anguish of And Then You Went Away into the heavens. We're all yearning along with him. And not since the a cappella community clued me in to Imogen Heap have I been so intoxicated by finding of a new artist. Everyone should run out and listen to more Brian Vander Ark. Brittle's buzzy baritone is commanding and convincing in his plea. You better listen.

The three-year difference between recordings of new material explains the average score for the album. A lot has changed in the realm of what's excellent, good and average in that short time span. There are some tuning issues at the beginning of songs. The balance is off in a lot of places with another instance of background voices thinking their part is as important as every other part in the song. Even though conventional music theory says that if you have a moving part sing out — when your moving part is supposed to accompany a soloist or duet — the singers have to remember that they are still accompaniment. When everything is presented as one big wall of sound, it just doesn't work musically.

The arrangements are still fairly standard, nothing too taxing for this walk in the park. The only one that sank completely was Ryan McAllister's attempt at a The Beach Boys Medley. Again, maybe I'm expecting too much narrative or structural arc when I listen to a medley, but this one was an homage to what most people hate about medleys. Other than exposing the fact that The Beach Boys probably sang most of their songs in one key, this arrangement is a splice-em/dice-em hodgepodge of tunes where one song ends abruptly to start a new one. In individual segments, McAllister has done a great job at constructing energetic and vibrant pieces to perform. But overall, you'd be hard-pressed to listen to the track more than once. That's not a good medley.

In a roundabout compliment, most people with good enough ears could probably woodshed these songs with the guys for an hour or two and join them for a fairly decent live performance. The album closes with a really strong version of Do You Believe in Love that everyone will want to sing. The Madison Project has always been about understanding and "praising" the heart of a cappella music and what it means to share the gift of song with fellow singers. I'm glad to see that the tradition is still continuing.

If you are fan, you probably already have the album. If you aren't, this is an okay introduction before you graduate on to Rock Star or The Khaki Album.

Late Night Drive-Thru is exciting, happy, tight, full, professional, fun, and necessary for your collection. It ranks among the best all-male collegiate albums to date.

Built on showy peacock pieces, this album leaves little to desire. The exuberance, stellar arrangement, and raw talent on September is unmatchable. The addictiveness and beauty of And Then You Went Away is fierce. Fun and funky Listen to the Music and Do You Believe in Love create a dance-to-the-finish feel. Even the targets for being commonplace — the boy band songs, the Beach Boys Medley — surprise and delight. Add gorgeous blend and high energy, and the result is rock solid. These guys could hold their own against many professional groups.

The details on Late Night Drive-Thru boost The Madison Project's powerhouse style. All of the soloists are very capable in this group, and several are stand-outs. Of particular note is Drew Brittle on Incomplete and Stay with Me. He's one seriously gifted fellow, with a voice that effortlessly captivates and impresses. The production on Late Night Drive-Thru hits the sweet spot of enhancement without going overboard, and there are plenty of chocolate sprinkles to excite you. In particular, the treatment of the upper voices on September and Do You Believe in Love is outstanding, along with the grandness of the soundscape on Incomplete. Excellent work, James and Bill.

This one's an easy candidate for the must-own category. Enjoy the happy tunes, absorb the moodiness of the serious songs, and play it all again and again.

These elements are all present in The Madison Project's Late Night Drive-Thru. They make the tracks shiny, sparkly, and virtually flawless in execution. They are also all impossibilities in the "real" world of a cappella, which may help explain why this CD gets a "3" instead of a "5."

If you submit to this kind of magical production hocus-pocus, then you may as well stop reading this review and go buy the album. I promise you'll love it. But if you are an advocate of a cappella in its purest, most uncut form, then I think otherwise. I know I'm not the pioneer of this argument, and I'll be the first to acknowledge that it's been beaten to death and then some on the RARB discussion forum. But the fact remains that I'm supposed to be listening to and reviewing a cappella music, and a cappella music this ain't.

The tracks on Late Night Drive-Thru are well arranged and well sung. I've seen the Madison Project live several times — I know they're good, and that they appreciate the medium of a cappella, so I'm stuck asking myself why they'd want to hide behind an octave generator and aggressive autotuning. The medium of a cappella is intriguing because it is a testament to what the human voice is capable of accomplishing without the aid of other instruments. It is an outlet through which true creativity can blossom; the art of writing a functional and interesting arrangement for only voice is part of what gives it its charm. So I face a decision: Submit to the changing of the tides and give this record a 5 because it sounds nice, or give it a 3 because I was expecting to be wowed by raw voices and instead was bored with mono-dynamic, ultra-compressed, emotionless block sound. No surprise. I chose the latter.

To be fair, there is undeniably a great amount of solo talent on Late Night Drive-Thru. The voices rise above the material supporting them. Close to every track has a frontman who delivers, and the very best singers bring life to their songs and help them climb above mediocrity. The arrangements are functional and occasionally interesting, but they would have much more meaning in the context of a natural sound, where the mechanics of the writing serve a purpose and help drive the song forward (instead of sampled percussion doing all the work). And I also have to say that even though I can't bring myself to give it full marks, the production and solo on Crazy make for a refreshing and enjoyable listen.

The bottom line is, people who buy a cappella CDs do so because they want to hear a fresh take on a familiar song (or, rarely, an original song). Fans of the medium forgive its natural limitations and enjoy the challenge of overcoming them. I, for one, am not impressed when a group takes the easy way out and covers their blemishes. A "raw" version of this album would have been much more engaging.