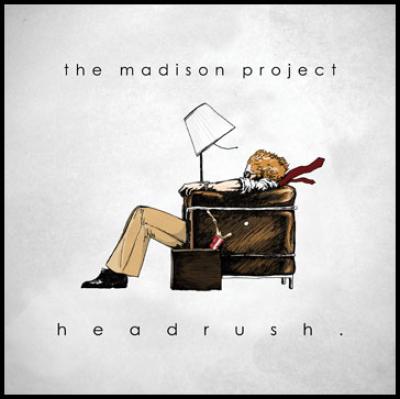 Seemingly, a lot of the albums produced in 2012 had one thing in common: earnestness. Madison Project's latest recording, Headrush, evokes that same reaction upon initial and subsequent listens. The really great guys from James Madison University are trying really hard to have a really strong-to-really-stellar album that features some really catchy songs and a few really nifty arrangements. And it gets really annoying after a while.

No, the album isn't bad. Truth be told, there are some transcendent phrases, a couple of moments that are quite enjoyable, some sections that are a little perplexing and only two places where I wanted to slap my speakers silly for playing such atrocities. Where that places Madison Project is on the upper end of a '3'. Headrush isn't an average album in the so-so vein or as a standalone entity; just a few simple tweaks here and there and a complete overhaul of the ending of Drops of Jupiter and the overall approach to Accidentally in Love would make it a good album.

But in the grand scheme of where the top groups are in terms of recording technique, innovation and production values, other groups have caught up or even surpassed them since Late Night Drive-thru and The Khaki Album.

To start off with the stellar aspects of the album, their earnestness comes in the form of an abundance of energy. Oh my lord are these boys happy to be singing. In the past, the group was known for doing push-ups on stage and getting up and performing their hearts out. Let's just say that that adrenaline rush caused by the physical exercise is very apparent from the first note of I'll Run. It's infectious and a perfect way to start off the album. The other two really engaging moments are Beautiful Mess and Come Home. From the elegantly simple arrangement by Jeremy Winston to the sublime solo from Matt Escano, Beautiful Mess is literally the pinnacle of the album in terms of track numbers and performance. I can't get enough of it. Yes, I am a beautiful mess, thanks for reminding me.

And Come Home ... just wow. It soars when necessary, but what I found the most chilling after Escano's solo was the use of silence and sudden stillness. That my friends is magic.

What's good is the inclusion of Maneater. The arrangement is fun and the studio effects enhance the auxilary parts very well to evoke the '80s sound that made Hall and Oates so famous. I just had a great time listening to it. Though that "wa ah ah ah ha ah" between the two verses is a bit jarring. The same can't be said for Time After Time. The original source is one of my favorite songs not just by Cyndi Lauper but of all time. So I was angry and perplexed upon first listen to this track when it wasn't what I expected. And that's what makes it good. Even though it's a transcription of Quietdrive's interpretation, I hadn't heard it before and so the performance made me listen to the song in a whole new way which is what any good a cappella arrangement is supposed to do. I still don't think that it works as a driving pop song, but kudos on attempting the challenge.

What doesn't work is what really drives the album into the gutter for me. Drops of Jupiter is already a horrible song, but the group does a good job at the beginning. And then the shitstorm happens when the backing vocals enter on the "na na na na na na na-ah-ah-ah" sections. Man what a disaster. There is no group cohesion and it seems like each of the singers were given the direction to perform it as horribly as possible. While Accidentally in Love isn't nearly as bad as that, it's still not good for similar reasons.

Whilst there will be no rush out the door or to your computer to buy this album, if you have it, it'll provide a good listen. If you are interested in what Mid-Atlantic a cappella sounds like, it's worth purchasing a track or two, especially if your tastes run the palpable middle ground. But if you are looking for a jolt of music to cause a Headrush, this isn't the ticket.

Lightning doesn't strike twice and all, but I'm still pretty disappointed that the rather haphazard offering Headrush is the follow-up to my 2008 Honorable Mention Pick Late Night Drive-Thru. That album was everything you want from a male collegiate group, and if you don't already own it, it's still a fun listen. This one, not nearly as much.

So alright, years have passed and surely many graduations have occurred within The Madison Project, making this is a different group of singers and arrangers. I'm not expecting perfect continuity, but the inconsistencies within Headrush — the crazy good highs and the noticeable lows — are fairly startlingly. Want to hear a perfectly styled soloist who delivers raw but controlled angst, coupled with a unique arrangement that makes a timeless song sound like a whole new song? Then listen to the awesomeness of Jack Vitaliz's lead on Time After Time (though I can't credit the arranger, because it isn't listed for this particular song; one of many aforementioned inconsistencies). Yet oddly, we can have a knock-out here and a gutter ball on Drops of Jupiter, with a shaky soloist who chops up lines, and some kind of wacky guy chorus starting at 3:38 that is bordering on unbearable because they all sound intoxicated.

When listening to Headrush through headphones, it becomes apparent that the mics used probably varied in quality. When a soloist gives a strong accent note or really enunciates, you'll occasionally hear little "pffts" on some tracks but not on others. It appears that there were several recording locations in play, which obviously doesn't help create a consistent sound in the end.

Good programming and presentation can really shape an album too, and provide the listener with a nice flow to get into the groove. On Headrush, we open in a fairly standard collegiate fashion with an alright rock tune (I'll Run), then sink down, then shoot up (Come Home is gorgeous and delivered with sensitive leads), and close out with four tracks of mediocrity. I think these tracks were probably the right songs for the traditional open big/close big formula that works well (especially Queen), but lack the vocal precision and creativity to really be convincing. Tied into the presentation is the liner notes, which only list "OPB" and not the requisite songwriter/composer.

Headrush is just not as professional or captivating as Late Night Drive-Thru, but a few tracks work well if you're one to buy singles.

Most of the songs on Headrush make for a fun listen; the Madison Project chose well to start and end the album with the high-energy and well-delivered songs I'll Run and Don't Stop Me Now, respectively. Maneater is a solid arrangement that doesn't take itself too seriously (there's a great snippet of Nelly Furtado's song of the same name, seamlessly woven in to the Hall and Oates cover). Even some slower (and less energetic) songs work well, too; the arrangement of Come Home moves along beautifully thanks to some well-placed dynamics (thank you, Madison Project, for putting some dynamics into these recordings!), and Beautiful Mess similarly knows when to ebb and when to flow, both in the arrangement itself and in the singers' volumes.

The group falters only in its less interesting song choices. Accidentally in Love has almost too much energy; the shouted echo of "Love!" is really jarring. The arrangement of Drops of Jupiter really drags with repetition and monotony, and the explosion into the group sing-along "nah-nah-nah" at the end is entirely too abrupt and grating. The percussion on More Than Anyone is mixed way too high and becomes a distraction on an otherwise tender song (which, incidentally, could really use more of the dynamics that the group showcased elsewhere on Headrush).

The Madison Project should also be careful with liner notes. Time After Time is listed as "OPB Quietdrive", when it was actually originally performed by Cyndi Lauper (and written by Lauper and Rob Hyman). It's great (and highly encouraged!) to give credit to the band whose version inspired the group's cover, but listing a cover as the song's original performance makes the group appear uninformed and sloppy. Madison Project and other groups, please take a little more care with the liner notes to reflect the original songwriters and performers — as well as the band whose version inspired these songs.