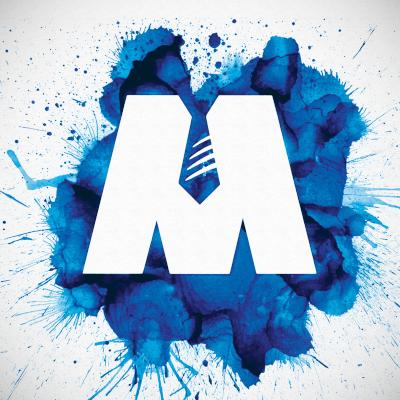 It isn't often that a reviewer gets the opportunity to check out two vastly different albums by the same collegiate group within the same year. Though to be honest, the previous album Headrush was produced in 2011 — so same group, different make up. Ah collegiate life.

This self-titled release by The Madison Project of James Madison University is more mellow and lush than its predecessor. But, unfortunately that makes it more boring as well. Whereas one can latch onto the highs and lows of the last album, The Madison Project becomes utterly more forgettable the more you listen to it. It's not really an average album, but it's far from classic good. More like a good-ish. The guys went the safe route with solid production, facile arrangements, standard musicianship and efficient soloists. All hallmarks of having a strong recording.

And yet, the lack of emotive singing on behalf of most of the soloists, the naturalistic approach to the production, and the relative sameness of the tempos from top to bottom makes the whole product come across as a bit flaccid. There are few challenges in either the backing vocals or the melody. You would think that with all of this wheelhouse singing, we'd be blown away by the obvious talent, when in fact we have twelve tracks of guys singing in a milquetoast fashion — palatable, but not a spice in sight. It's like watching Miss America when you thought you'd be getting The Voice.

I fault the arrangements for this middle-of-the-road approach to the album. There is a propensity for the letter "j" to try and carry all the weight, momentum, and excitement of the tracks: "jom jom ja da" in Heartbeat; "jin, jin joh/jin din din jah" (or the slight variation upon each repeat) in Don't You Worry Child; and "ja nah nah nah" randomly descending lines and "ja na ja na ja na" transitions in Colder Weather. And it just doesn't or can't or won't. It's like the group wants to call themselves The Madison ProJect.

Also, the decision to produce a seemingly unaugmented (obviously not the case) album in a defiant "YES, THIS IS WHAT WE SOUND LIKE LIVE!" fashion requires the group to, you know, actually sing, otherwise you expose the lack of balance, energy, passion, and substance within your music. It's so very different from Headrush, where that was one of the best qualities of the album.

I'll repeat my ending from my previous review as the same holds just as true: if you have it (The Madison Project), it'll provide a good listen. If you are interested in what Mid-Atlantic a cappella sounds like, it's worth purchasing a track or two, especially if your tastes run the palpable middle ground. But if you are looking for a jolt of music ... this isn't the ticket.

Following the success of Headrush, The Madison Project is the most respectable album that The Madison Project has released that I've heard to date. The group, James Gammon (mixing), and Dave Sperandio (mastering) should all be very proud of the work that they've put into this album.

The arrangements are creative while remaining true to the original songs, and they have been enhanced by Sperandio and Gammon to give the listener everything that the studio has to offer. Cascading chords, brilliant vocal percussion, full-bodied bass, and excellent soloists combine to make this a superb album. But is this enough to set The Madison Project apart from the hundreds of other all-male collegiate a cappella groups?

The tracklist panders to the more overplayed songs of the past several years (Gone Gone Gone, I Won't Give Up, Clarity, Don't You Worry Child, and As Long As You Love Me). But it also brings fresh takes to lesser-arranged songs (Heartbeat, Colder Weather, Industry, and Ever After), the last of which earned The Madison Project a much deserved spot on Voices Only 2013. A heart-wrenching solo performance by Dan Johnson coupled with innovative arranging work by Braden Pierson, this track serves as an emotional pillar around which the entire album gravitates. Condensing the nearly seven minutes of material that Marianas Trench presents in their original into a cohesive arrangement is an accomplishment on its own. My only wish is that the arrangement could have been the full-length of the original song as we are missing a critical part of the story that leaves the listener feeling incomplete.

However, this brilliant coupling of soloist and arranger doesn't permeate The Madison Project. The chorus material of Gone Gone Gone isn't nearly interesting enough to warrant a repeat, and every chorus is identical. This arrangement works perfectly in a live performance setting but it didn't translate for recording. Tracks like Colder Weather, Industry and So Close just seem to plod along. There's nothing glaringly wrong with these tracks but there's nothing spectacular about them, either.

The Madison Project is definitely not in my top ten, but it's not in my bottom ten either. To remain relevant beyond the hundreds of all-male collegiate a cappella groups doing the exact same thing and doing it better, The Madison Project will need to find something unique to say with its next album.

The Madison Project's self-titled album has a lot of flash, flair, and danceable tracks on its 2013 release. It's an album with few curveballs in terms of song choice and arrangements, but it delivers well with commendable solo performances and vocal execution.

Heartbeat is a good way to start the album, establishing a good sense of the pace and feel for the rest of the way. The soloist for this song is well-chosen, and has a very smooth delivery and a fitting timbre for the song.

The rendition of Zedd's hit Clarity is an interesting take on the song, but I find it personally a bit anti-climactic in its delivery. The background is executed well, but the intensity of the song isn't quite where I would like it to be. The soloist does a decent job of singing the song in his own style, but because of the infamous high notes in the song's chorus (and popularity of the song), I still find my ear conditioned, waiting for that shining moment that never really comes.

I am thoroughly impressed by Ever After, which is driven by a terrific, emotive solo performance and nifty arrangement particularly in the brief breakdown segment in the ending.

Colder Weather is another song I thoroughly enjoy on this album, again driven by another great solo performance. I can appreciate that the arrangement and soloist, in his performance, doesn't push the issue on expressing the country "flavor" for the song. The exaggerations of southern accents or overdone "vocal guitar" bits for example, can easily create a cheesy, almost mocking vibe that can quickly undermine the impact of the song.

Don't You Worry Child is fun to listen to, but it ultimately doesn't keep my interest for too long. The track seems to be too concerned with "Xeroxing" the original. This track, along with some of the other Top 40 songs covered on this album like Clarity, seem to suffer from similar issues of over-production and effects trying to replicate the electronic sound, as opposed to perhaps creating something different with the voice itself.

In short, The Madison Project is a fun, sonically pleasing album — and while it doesn't necessarily offer anything new in the way of innovation, it should still deliver delights to lovers of a cappella music.

For questions regarding The Madison Project's current or past albums, visit the group's website or e-mail booking@themadisonproject.com.