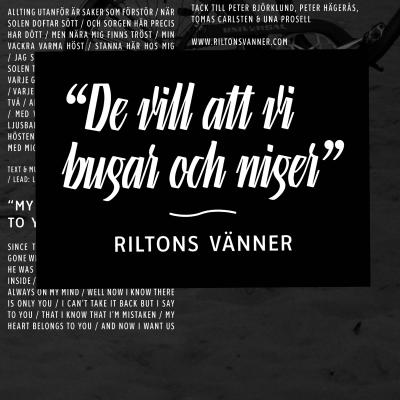 Riltons vänner's last release Här är passion has a sound, delicate and crystalline, that surrounds and envelops the listener in a wash of beloved and bittersweet memories.

While much of that precious, ineffable quality remains on De vill att vi bugar och niger, there are changes. Some subtle thing in the musical direction, the production, the pronunciation or possibly the alignment of the stars is different here and there. It's hard to put a finger on just what's been altered, but this version of Riltons vänner is just a bit more dramatic, more full voiced than in the past. One might be inclined to attribute this to their membership change, but in truth it's something more.

While the whispery intimacies we've come to expect remain, the occasional belty material, however melodic, just falls a bit short. The sense of genuine vulnerability isn't replaced by something that translates as equally honest, but rather just something bigger, and sometimes overdone.

The arrangements, intertwined with the production, are beautiful servants, providing the leads and songwriters with what is most needed. They bloom gracefully, presenting themselves simply, yet with subtle complexities. Somehow Riltons vänner can deliver bold chordal surprises with a grace that leaves their power intact while steadfastly assuring us of their inevitability.

And worthy of its own kudos, they never make that most heinous of arranging errors: writing a part more interesting to sing than to listen to. Every singer serves the song as a whole and that makes Riltons vänner a constant joy to listen to.

My least favorite material on De vill att vi bugar och niger is the English work. The pop-pronunciations aren't exactly right (Don't Let Me Know being the worst offender) and even when they are, the songs walk the line of forced and dated.

But these occasional wanderings aside, Riltons vänner remains one of my all-time favorite groups. It's impossible not to follow them through the nearly mystical soundscapes of Nånting inom oss, SONG>Klor, or the title track, De vill att vi bugar och niger. These songs alone are brilliant and well worth the purchase price. True, this may be my second favorite of their albums, but that still places it on the highly recommended list.

I had to ask myself, is this the same Riltons vänner that released 2005's Här är passion? The group's previous release was technically flawless but emotionally distant, leaving the listener cold. The group's latest, De vill att vi bugar och niger is leagues better, still sung excellently but also presenting a rich tapestry of feeling.

For my money, an a cappella cover will rarely touch a well-written original. Instead of using fancy arrangements and production to overcome the voice's limitations, good writing captures the voice's ability to convey emotion and feeling like no other instrument can, and Riltons vänner delivers good writing in abundance. The arrangements on De vill att vi bugar och niger are sparse, yet provide maximum effect. On De vill att vi bugar och niger the predominant use of the syllable "vmm" conveys a sense of motion and decay, while a didgeridoo-like pedal note in the bass provides tension which heightens the excitement. Hjärtat, uses short, soft block chords to give an elegiac sound and reaches a climax with multi-part harmony on the lead. My favorite track, Nånting inom oss, manages superb groove with just a simple, syncopated bass line and beautiful, chewy percussion. With this album, Riltons vänner proves that a cappella need not be complex to be interesting.

De vill att vi bugar och niger also shows tremendous improvement with solos. Linnéa Olsson is still ethereal but not as distant. Matilda Lindell, who sings the three English language tracks, sounds soulful and authentic. Another standout is Daniel Greayer. He shines on the final track, En tyst minut, where despite some pitch and timbre issues, his sheer force of will and emotional power cannot help but move the listener.

Despite its strengths, this album isn't as accessible to an American listener as I would prefer. The Swedish tracks (10 of 13) have no translations in the liner notes, and I found it hampering not knowing the lyrics. Further, the three English tracks are by far the weakest on the album. While the singing, songwriting, and solo are pretty good, I just couldn't get beyond lyrics that were banal and didn't fit the mood of the song. For instance, the chorus of My Heart Belongs to You climaxes with the ever-popular "Don't turn away, it would ruin our thing, so just stay with me", and the verses are even worse. If Riltons vänner wants to continue singing in English, I might suggest a new lyricist.

Overall De vill att vi bugar och niger is an excellent album, full of fantastic singing and top-notch song writing. Even without translations of the lyrics, the songs are spellbinding. If only they had some US tour dates coming up…

Non-group member Peter Björklund has again provided most of the all-original material here along with help from Peter Hägerås and Matilda Lindell, and once again offers more strengths than weaknesses. There is some redundancy, as heard on Små sköra trådar and Nånting inom oss, and some sleepiness, as heard on Hjärtat, but when a group is this musical and passionate, the decrease in enjoyment is minimal. Björklund's greatest arrangements are complex and daring, where the singers can really show off their skills — the title track and Varje gång jag ser dig fit the bill nicely.

Like with Här är passion, a listener can't help but notice and feel inspired by the bass, courtesy of Sebastian Rilton himself. Whether he's on the beat or off the beat, supporting the chord or off creating whimsical little solos, Rilton achieves the unexpected, moving the unassuming bass line to the front of our radar in masterful ways. His bass work has become a signature for Riltons vänner, elevating the ensemble to a group where every part has total creative control of their instrument. It's really something. Listen to his approach on Ensamhet. Unreal.

There are three songs sung in English on De vill att vi bugar och niger, and all are originals penned by their lead, Matilda Lindell. There are really only two things you need to know about Lindell: her voice is so hot smoke will pour from your speakers when her tracks roll around, and her relatable songwriting is a real breath of fresh air. There's a strong possibility you'll want to replay It's Time to Leave, Don't Let Me Know, and My Heart Belongs to You as soon as they finish. But keep a fire extinguisher at the ready while listening just in case.

Albums this thoughtful and artful are certainly a rarity. De vill att vi bugar och niger is a wonderful listen time and time again, and one deserving of your attention.

To order this album, visit iTunes, Klicktrack, or — in Europe only — CDON.