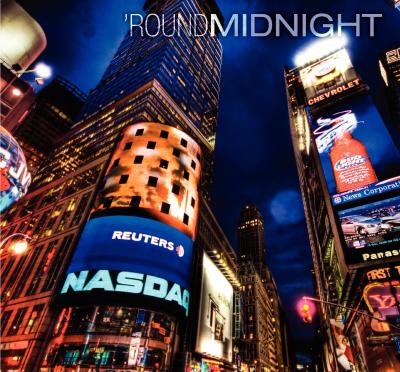 'Round Midnight is captivating for about half this album, and merely pretty good for the rest of it. Four young men, singing au naturel, in tune and engaged. I was utterly charmed.

Moondance is the perfect start, the stealth barbershop track that sounds like it should appeal to just about anyone. They sing, they groove and — oh yeah — they lock a few chords once they've got your attention. It's not until Anytime At All that they step out of the closet. I can't speak for how everyone will react, but I swooned. The blend, the timbre, the beautiful song — what a number.

Paradise lingers for Try A Little Tenderness and has a reprise in Sing Me That Song Again. Both are quintessential barbershop; Try A Little Tenderness may sound miscast to some but I thought the Ed Waesche/Wayne Grimmer arrangement worked very well. Waesche's intro is the real star there — no surprise given his barbershop legacy — and he also deserves credit for Sing Me That Song Again, which is just gorgeous.

Not that having a star contributor is any sure bet. I've never cared for Jay Giallombardo's foursquare take on Tonight, and despite the able performance I don't like it any better here. Likewise, Boston Common's Don't Be A Baby, Baby is a skilled rendition of a song without much of its own appeal. Sorry, 'Round Midnight. Don't let my tastes get in your way.

On my four favorite tracks, 'Round Midnight comes through with a luscious and nearly flawless sound. All the other ones had at least a few quibbles where I was concerned — the doo-woppy falsetto on Since I Don't Have You, the odd slightly unlocked chord or less than perfectly blended tag. Still, it didn't take away too much from the overall quality of this album. Grimmer (who sings in the group) is an innovative arranger, and the group overall seems to have a good feel for how to make high-quality barbershop sound young and alive.

'Round Midnight comes across on this album as an extremely talented group with plenty of charisma. I loved the group's sound, and I hope we hear a lot more of it.

‘Round Midnight's long-awaited eponymous release is a throwback in production and a small step forward in combining the disparate worlds of barbershop and pop. Admittedly, this is the pop of decades past, but nonetheless ‘Round Midnight is a group whose zeitgeist merges the phrasing and precision tuning of barbershop with the expressiveness of a pop lead. It's a combination that works.

I've long been a fan of ‘Round Midnight's live performances, both at the New York Harmony Sweepstakes I've judged and the a cappella summits I've produced. Frankly, I'm not sure I can recall a single performance in which the audience didn't give them a standing ovation. That speaks volumes about ‘Round Midnight's charisma. And against all odds, this is a charm that's largely captured on these tracks.

'Round Midnight is a clean and honest-to-a-fault recording of a great group, but that isn't the same as a great recording. Listeners have become so accustomed to the perfection of studio enhancements — punch-ins, retakes, sweetening, pitch correction, rhythmic grids, deleting breaths — that the sounds and accompanying imperfections of pure, exposed voices can be a distraction.

You will hear chords that don't lock, breath support that waivers, vocal warbles and other signs that this album was constructed song-by-song and not note-by-note. By that measure, even with these guys' rich voices, things are just a little rough.

But you will also hear many chords that are better tuned than anything that studio gadgetry can muster, phrases that ebb and flow more musically than any producer's hand can draw, and always, always, lots of heart.

'Round Midnight effortlessly breathes life into even the most dated of their song selections. Contemporary fans may be surprised. All of sudden, tracks like 1958's Since I Don't Have You or 1957's Tonight are so much more than half century-old tunes; they're stories, rich with emotion. There's no Pro-Tools plug-in for that. It comes from the artist, or not at all. And 'Round Midnight are artists.

The best way to enjoy ‘Round Midnight is to willfully abandon the very desire to hear that familiar studio perfection and just ride the ‘Round Midnight energy. Close your eyes and imagine yourself at one of their live performances.

Despite the imperfections, you just may find yourself rising to your feet as well.

'Round Midnight's self-titled debut album shows off this quartet's core strength: classic songs performed in a barbershop style. There are some great arrangements here (several of which were written by the group's own Wayne Grimmer), and when these four singers are on, they're really on: there are moments on In The Still Of The Night where the blend is so precise that it sounds like one voice split into harmony.

Sadly, there are just as many instances on 'Round Midnight where the group gets to "good" but doesn't reach for "great": the beginning of Tonight sounds really shaky, and both songs with an opening, isolated bass line (My Girl and Don't Be A Baby, Baby) get off to a rocky start. Similarly, while Shout! likely goes over great live, the group doesn't do enough on this recording to make the climax ("a little bit softer now.... a little bit louder now") dynamically dramatic.

There are enough moments on this album that show that this group has the vocal chops to pull off these songs — which makes the little missteps all the more frustrating. The swelling, sustained note that closes Sing Me That Song Again is chill-inducing, the bell-like ending of Since I Don't Have You is lovely, and the final repeat of "Can I just have one more...." on Moondance adds one new voice with every phrase, an unusual — and striking — twist in this arrangement. These are all small details, and that is 'Round Midnight's forte: classy, subtle nuances over flashy/sleazy versions of these tunes. I just wish the rest of the album had hit the same high bar that this group is so clearly capable of reaching.