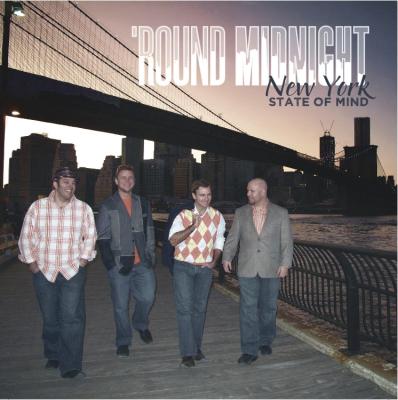 That's a great endorsement of the group. I'm not entirely sure what it says about the album. There's plenty of good singing. Decent range of repertoire, while attractively remaining within the barbershop style. Tons of swoopy yummy barbershop tags to please those of us who like that sort of thing. Just ... not quite enough sparkle. Maybe production, maybe just this is a good group that hasn't yet made a transcendent album.

Body and Soul is one big collage of tag moments, a musical drama framed against the backdrop of a love song. It's a good arrangement and a good performance. But not perfect — there are a few chords that don't lock here and there. I'm torn about whether I should even be bothered. The bottom line is that my gut-level reaction likes this song a lot but doesn't adore this song. The same not-quite-sparkle takes away from Some Lucky Day, which has some of the best Lambert-Hendricks-Ross verbal patter I've heard in years. It's a great song, a great performance — and can I go to the concert, please?

Honesty is a live performance, and it's as good as the others, and better than some. The only giveaway that this track was any different from the others is a slight shift in the balance. The lead's voice cuts through almost a bit better here, with a slightly different color than the group gets in the studio. Really though, it's just another good track, to the point where I was a bit startled to hear the applause at the end the first time through.

'Round Midnight is a great group. This disc seems like a great way to get to know these performers or to remember the highlights of a wonderful evening out. For best results though, I have this feeling we need to get to the show.

I have a real appreciation for barbershop and an admiration for its practitioners, especially those who do it well.

As if the group's various awards (Harmony Sweeps regional champs, CASA Community Award, et al) were insufficient to demonstrate its talent and popularity, I'll just make it perfectly clear by saying that 'Round Midnight is a very good, lots of fun, solid barbershop quartet.

Listening to a two-song set as part of a competition that includes groups performing in other styles, or even a series of barbershop groups performing three-song sets, is different than indulging in a whole album like New York State Of Mind, even when it features a reasonable (and refreshing) ten songs only.

To its credit, 'Round Midnight is not afraid to push the boundaries a bit, mixing the traditional unison, ringing harmonies of classic barbershop in songs like Some Lucky Day with departures into vocal jazz in that same song, on All My Loving and briefly in the closing That Thing You Do!.

Unfortunately, that sort of adventuresome spirit proves to be something of a double-edged sword. While it offers a bit of variation in the listening experience, the group tends to be most successful when sticking to the tried-and-true barbershop stylings and less so when going a-wandering musically. There's nothing bad here, but the treatment of All My Loving couldn't be more square and uninteresting as vocal jazz. The treatments of two Billy Joel songs are ambitious but include some muddy and downright odd sounding harmonies in places. Honesty, in particular, was bothersome as the arranger's approach to the song musically really undermines the meaning and power of the lyrics.

Also not entirely helpful here is the main production choice: placing the voices distinctly in the same spot in the stereo pan in every song, mimicing (I imagine purposefully) the experience of hearing these guys live. I completely understand the approach but it makes the album much more listenable through speakers than through headphones. With headphones, the placement of the voices so distinctly works against a blended sound and instead one hears four separate voices — albeit in rock solid harmony — but still disjointed. To me, this is the antithesis of what barbershop strives to be so it was ceaselessly annoying to grapple with on my second (headphoned) time through the album.

At the end of the day, if you're a fan of barbershop, I believe you'll find this to be an enjoyable, if not extraordinary album. It's by no means a must-own, but if you're looking for a little variation in your a cappella collection and you like the material being covered here, it might be worth a listen for you.

'Round Midnight is a New York barbershop quartet with a traditional take on classic tunes. On its latest album, New York State Of Mind, the group's blend isn't perfect — which isn't necessarily a bad thing. The album was likely not pitch-corrected in the studio, and these imperfections make the recording feel natural and human.

These imperfections also don't distract from the album's best songs. When these guys are on, they have a warm, rich tone that makes for an enjoyable listen — the title track New York State Of Mind is truly fantastic. Some Lucky Day is another highlight: this is a great arrangement, and the guys have a playful sense of dynamics that works really well with the song. Honesty sounds so polished that it wasn't until the applause kicked in at the end that I realized it was a live recording.

That said, there are some weaker moments here. Contemporary-style arrangements don't always work that well for barbershop groups (see: Maxx Factor's contemporary songs on The Sing-Off), and the same is true for 'Round Midnight. All My Loving is a bit rough with its shaky, exposed bass line, awkward syllables ("bap!" "do wap!"), and awkward blend in the bridge. The opening percussion line of That Thing You Do! is distractingly bad.

Beyond the arrangements, there are moments in 'Round Midnight when the guys are singing in unison, but it doesn't sound quite like unison; I wish it sounded more like one perfectly blended voice. I also wish that the group had done more with volume: there are hints of dynamics in the great arrangement of Body and Soul, and the song would've been much more dramatic if those had been intensified.

My album categorical scores are all "4"s, which makes the album seem much more uniform than it actually is; there are some really outstanding moments here (I didn't mention this song yet in my review, but I love Nothing Can Change This Love!), but there are also some rough spots that could stand to be polished up just a little bit as well.

This album is available on CD Baby, iTunes, Amazon, and roundmidnightquartet.com.