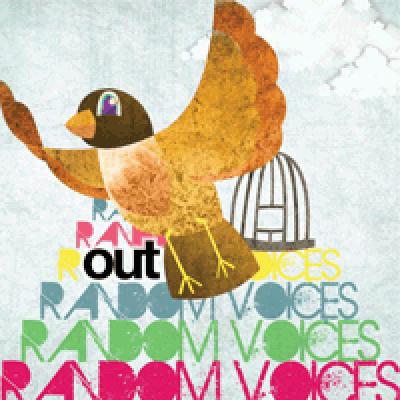 The all-female UCLA group Random Voices has a lot going for it: great soloists, great blend among the backing singers, and an overall solid recording. All of that makes Out an enjoyable listen.

The only weakness here is that these ladies didn't push it far enough. Arrangements languish a bit with too much same-ness from verse to verse: Super Duper Love and Waiting In Vain maintain essentially the same arrangement from start to finish (with a few counter-melodies thrown in at the very end of each song), when building each song from a simpler arrangement to a fuller one could have helped shape the song's direction. Similarly, the group doesn't make enough use of dynamics: the climax of Like A Boy should've crescendoed to a booming forte, and Winter Song keeps the same volume throughout when dropping this haunting arrangement down to a whisper could've given goosebumps.

By contrast, the group excels when it brings unexpected elements to its songs. A cover of Duffy's Mercy uses Amy Winehouse's Rehab to spice up its ending, which gives some much-needed variety to an otherwise repetitive ("Mercy, yeah yeah yeah!") arrangement. Similarly, the bridge in Runaway starts small, then adds voices and crescendoes to a peak that grabs the listener's attention. It's those kinds of moments that I wish had been in every song.

Kudos to the group for its soloist choices, too: on almost every song, the group has picked a lead who absolutely nails the original. Leah Grounds sounds like Carrie Underwood Jr. on Last Name, and Melissa Casas channels her inner Jennie Lewis on Rilo Kiley's I Never. It's not so much that they sound like the originals; the real key here is that every soloist here is well suited for her song. This is something that so many groups overlook, and while I have no insight into how Random Voices chose the songs for Out, it sounds as though they thought about the strengths of its singers first, rather than picking songs they liked and hoping that someone could pull off the leads.

With a group with such attention to soloist choice and blend, the only major disappointment is the album's final track, False Starts. It's five and a half minutes of studio outtakes, complete with giggles and interjections of "Crap, sorry!" It's the type of compilation that's probably hilarious to the people who were there, but that's as far as it should have gone. Its inclusion here — yes, even as a bonus track — just makes Random Voices seem unpolished and unprofessional. We don't need to see the man behind the curtain here, on an album which is otherwise a pleasant, solid, and enjoyable listen.

(One final footnote: I doubt the group meant "OPB: Destiny's Child" for Amazing Grace. "As Performed By", definitely. But the original performance of Amazing Grace far predates Beyoncé and her vocal companions.)

The UCLA Random Voices are at their best performing slow, lush ballads with big sweeping chords. This is because their arranging style and studio approach is decidedly pretty and vocal. "Bum bah no" and similarly dated background patterns are heavily utilized in places where the group might have instead opted for more creative vocalizations, non-sung sounds, or surprising studio production. These are the tools of a top-notch all female group. Random Voices is a solid group, but it isn't among the best.

The gap from "solid" to "best" is covered with another all-important element lacking from the Voices' production: energy! Said energy is doubly important if you want to pull out a track list of ballsy, gutsy, big-ego music. Like A Boy, Super Duper Love, Mercy, Last Name, and Damaged all fall flat at one point or another due to a decided lack of hubris, of commitment to kicking butt and taking names. These are all tunes that, to be believable, require a level of in-your-face energy that the Voices just can't seem to sustain yet.

As I hinted at above, arranging is a big factor, too. It's tough to really get gutsy when you're singing over a thin block of "ven ven ah" (Like A Boy). Hip hop/R&B in particular are styles so characterized by digital sound that covering them a cappella requires a creative approach beyond conventional arranging (For a great example, see Duke Out of the Blue's Keeps Getting Better.) The Voices' style is pretty strictly conventional. Again, this works well for ballads, but not so much if you want to go ballsy.

On a positive note the singing on this album, though a little low on energy, is good. Soloists are all decent, but sometimes sound a little too careful. You can almost hear the wheels turning in each girl's head, critiquing her performance as she delivers it. This is not a good recipe for finding the aforementioned energy. Make sure you've got someone else in the room to tell you when things sound off (a producer, engineer, or other group member). Your job as a singer is to focus on getting into the zone to deliver energy and commitment on your part.

If I were in the Random Voices, I would make one of two choices moving forward. Either A) refocus the track list on the next album to play more to the vocal and arranging strengths of the group (not recommended, as it will probably be a rather slow album), or B) get more creative with arranging and less constrained in vocal delivery. Some research into other female collegiate a cappella might reveal techniques that will come in handy next time around. Until then the Voices will have a product high on competence, but low on surprises.

P.S. Please leave off the 5-plus minutes of "false starts" next time. They aren't funny or endearing, and only serve to sour the end of what is an otherwise good album.

Out is unfortunately like too many of the collegiate albums that have crossed my review desk this year: it sounds pretty good, the group didn't shoot itself in the foot, but there are far too few of the moments of real passion and artistry that could have separated them from the crowd. It's a good album — at times very good — but not a great one.

What do the Random Voices sound like? They are a large all-female a cappella group from UCLA. Their website says 15 singers; the album lists 18 names. The vp sounds highly processed, with the kick drum sounding far too low for it to have been produced by an un-assisted female. That's not a complaint; I think the vp works well, but this is an observation for those who care. As an example of the part distribution, in Waiting In Vain the soloist (low soprano or high alto) is accompanied by about three chordal parts (one higher, one mid-range, one quite low, possibly octavized) and about two or three moving background parts (one about the same range as the soloist and one lower), and of course vp. The parts move effortlessly in and out of the music, and provide one of the most solid foundations to any of the songs on the album. In fact, one of Out's best moments is when soloist Maya Lohith comes in for the first time on this song. She has a very pretty voice, which grabs one's attention from the get-go.

Unfortunately the accompaniment parts in the other songs in general aren't as well developed and lack the full, rich sound that permeates Waiting In Vain. That seems likely to be an arrangement issue. The other major disappointment is that many of the songs tend to get somewhat repetitive — and consequently boring. As mentioned above, the album could use more emotion and passion. That could have to do either with the arrangements, or (more likely to me) with the interpretations of the arrangements. For example: I have four other a cappella versions of I'm Yours already ... what does this version bring to the table to set it apart from the crowd? Not much. It has zero chance of making it onto my mp3 player.

The plus side is that the album features many excellent soloists. I mentioned Maya Lohith above. Another stand-out solo is Elena Smith's version of Mercy, busting out a soul-full rendition that would make Aretha Franklin proud. And Leah Grounds does bring a lot of emotion to Carrie Underwood's Last Name, for you country fans out there.

Finally, just a couple of additional issues that I feel I should point out to help the group improve. The arrangement of I'm Yours called for the soloist to be too low, almost as low as the "bass line" (lowest altos). That makes it very hard to have the soloist stand out and so she didn't. In Winter Song there was a major pronunciation issue: I couldn't even understand the "Is love alive" line which is sung countless times at the end of the song until I looked up the lyrics ... it sounded like "Is love a lie" to me! And even after I looked up the lyrics and listened to the song again with the real lyrics in mind, it still sounded like "Is love a lie" to me. And, in my opinion, False Starts (an outtakes track) should have been left off the album. I'm sorry, but 5 minutes of "Sorry" being said every 5 seconds is just not fun to hear.

To summarize, there are many good things about this album, but it's not a "must purchase".