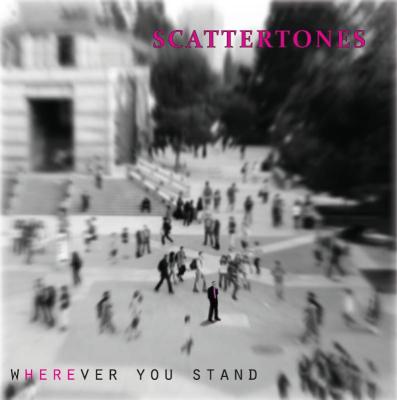 A designer brings a vision to life. A modern tailor relies on a machine to complete his work. For my tastes, the tailors who mixed and worked Wherever You Stand (Gammon, Tong, Boyer, and a slew of editors) went a little overboard turning a natural fabric into a synthetic blend. Sure, it's durable now, but there are heaps of buttons and ribbons and gems stitched on this album. It's also not very smooth sounding, with audible little cuts heard, which I have to presume is in part due to the self-recording efforts of the ScatterTones. Given the super impressive solo line-up and the seemingly good arrangements, trying to bridge a listener connection to the overworked, extra digital background (especially the persistently mechanical bass) is a frustrating experience. When a group has the pipes, and boy, these kids do, it's nice to hear the raw talent at close range; why build the floor under singers who can fly? And yet, it's hard to argue sonic preference when the ScatterTones can clearly sing the crap out of anything.

But here's a compelling case in point: Let It Be got a gentler production hand, and the result is chilling. There are Beatles covers, and then there's this, an artful anthem that walks the line between desperation and hope in a way I've never heard before. Arranger Taylor Fugit deserves a standing ovation for this one. Adding extra emotion to the story is a dedication in the liner notes to an obviously beloved ScatterTone who has passed on. What a powerful, incredible number in all respects.

And now about these soloists. In my notes, I wrote something along the lines of "very strong soloist" or "ridiculously awesome soloist" for each and every track. Show me another collegiate album that compares to the leads on Wherever You Stand, if you please. I feel like I should praise someone for this achievement, so Melinda Porto, I'll give it to you for holding your own against the mighty Celine Dion on Taking Chances. Wow.

Huge props to the ScatterTones for getting better and better. I'll hope for less tinkering next time, but if the vocal bar is just as high, I'll still be glad to listen.

You'd better listen to Wherever You Stand a bit further back from your speakers than you usually listen to music. The newest album from the ScatterTones is LOUD! It is also pretty damn good.

It's immediately evident upon listening to Wherever You Stand that the ScatterTones are all excellent singers. Not a single background part isn't supported and committed to. This is sometimes to the detriment of their dynamic range. A lesser group of singers and musicians using this aesthetic would sound forced. The ScatterTones seem determined to produce the loudest version of every song on their album, and they have for the most part succeeded. I've heard forty-member chamber choirs sing no louder than a whisper though, so I'm not willing to give them a pass on this. You can only take so much yelling for so long without your ears starting to ring. Nowhere is this more evident than on Happy Ending, which instead of being delicate, is a constantly-building mess of noise.

The group's sound reminds me of a more edgy, committed version of the USC SoCal VoCals; kind of like a show choir, very vocal in their arranging style, and always bright. From loud through louder all the way to loudest, the group's sound stays uniform. Russell Angelico deserves big kudos for creating such a unified style and sound for a group so large — no less than 21 ScatterTones appear on this album.

Two tracks deserve mention as truly outstanding. First, the fact that an a cappella group even attempted Leave It is impressive. The arrangement is fantastic, then David Chong comes in and rips the lead to shreds. I could have done without the chime effect, or at least a little less of it. I thought I had tinnitus upon first listen. I'm only sad that there weren't more opportunities in the song itself to showcase Chong's voice.

Later we hear the ScatterTones' take on Stevie Wonder's Higher Ground. The song is slightly slower than the original, which at first felt draggy, but allowed the backing voices to actually take some time to work and grow. It's probably the most vocal arrangement on the album, and sounds great. The lead doesn't sound quite as effortless or spontaneous as I'd like on a Stevie tune, but he reaches for and finds the high stuff, even if the lower turns in the outro sound a bit uninspired.

I applaud the ScatterTones for taking the production process into their own hands, and while the vocal production sounds fantastic, they didn't do so well on the parts of post-production they took on. There's at least one splice error every two tracks, particularly noticeable in leads. Tuning-wise, solos and backs are often tuned far too hard for my tastes, or have had their initial consonants and sibilants eaten alive by tuning software glitches. This is particularly glaring on some of the more exposed leads. The male lead in the introduction of Let It Be* sounds exactly like its counterpart in Across The Universe, and that's not a good thing.

This album is so close to being amazing, it's almost painful. But it's not quite there. There are really only two things keeping this album from being truly excellent (read: getting an Overall "5"), and they can both be summed up in one word: subtlety. A little more dynamic range and a much lighter touch with pitch editing would go a long way for the ScatterTones' next release.

*The album's liner notes list "OPB: Carol Woods, Timothy Mitchum, Across The Universe." This should be, obviously, "APB" the above, or "OPB: The Beatles".

If there is one thing I love, it is a good a cappella album. And The ScatterTones' latest album, Wherever You Stand, is exactly that. This group of kids from UCLA is so talented, it's a little bit mind-blowing. Led by their fearless music director, Russell Angelico, The ScatterTones really tear up the stage ... well ... I guess it would be iPod? Anyway, this album is fantastic. That's really what I'm trying to say.

So if you listen to Mouth Off!, you may have heard a segment I did with Chris Diaz where we discussed the before and after of seeing Sonos perform. In a five-hour car-ride-induced coma, I said something very dumb. Chris asked me what I expected of the show and I responded with "Good singers singing good." While this sounded dumb at the time, I find it now holds real meaning. What do we really want as listeners of an a cappella group, or really in any music? We want to hear people who can melt our faces off with their awesome badass-ness and then bring us to tears within the same set/album. We want to hear good singers singing good. And The ScatterTones really fit the bill here. These are good singers who sing their little butts off.

Production abilities can only do so much for a group on the back-end of an album. To have a great album, the group members have to absolutely kill it while recording. There are a few tracks on Wherever You Stand that I would love to hear the raw takes of. I'm willing to put money on the fact that Leave It, Taking Chances, Let It Be, God Only Knows, and If You're Out There were just as awesome then as they are on the finished album. May I point out that I just named five tracks? That's fifty percent of their album, my friends. Impressive.

There are a few bumps in the road, as is expected with any album. A few of the tracks just couldn't reach the bar after it was blown up by the first tracks of the album. Man in the Mirror, Beautiful Day, and Happy Ending are fine. But that's just it — they are just fine. Totally acceptable regular collegiate a cappella material, but they completely pale in comparison to the rest of this kick-ass album. My gut tells me the reason for this is song choice, but there are many different factors that could be in play: the album had many various engineers mixing the album and also included many different arrangers.

The real jewel of Wherever You Stand is a brief story in the liner notes that the group includes. They tell a story of a new member, Brooks Paul, who lost his battle with illness. In the track listing, they dedicate two songs to him. After listening to the album, reading the liner notes, and going back and listening to those songs again, it was a completely different experience. Let It Be and If You're Out There were instantly better than they were before, if that was even possible. There was a whole new emotional connection that I felt with the singers. It's almost like the listener can hear Brooks' story through the syllables that his former group members are singing. It's a little unreal.

At the end of the day, The ScatterTones deliver a top-notch album that deserves recognition. I know I got what I wanted out of it. I got forty-two minutes of good singers singing good; from baller soloists to brilliant arrangements, I am very impressed by the talent that exists in this group. So after melting my face off with their awesome-ness, they brought me to tears with Brooks' story and their inspired singing. Well done, ScatterTones, well done indeed.