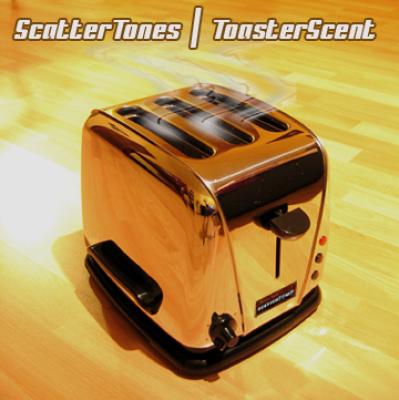 The ScatterTones rock hard and sound nice, giving them a nice new calling card to send 'round the a cappella social circle. The solos sound good, the energy stays high and Gabriel Mann's production work is universally effective. The songs aren't what I would choose and I don't get the album title, but don't let me stop you from clicking in.

Here are some things to like about this album: the first song is the best, its de rigeur Radiohead cover is a new and interesting selection (There There), and there are no horrible performances. Accidentally in Love really is fun — lots of energy, a verbal hook to keep the intro from sagging, and a great big wall of sound that rides all the way through. As the disc proceeds, the wall-o'-sound arranging gets a bit tired to my ears, but the group generally gives it a good ride.

A few things I didn't like: the dance medley and the Disney cover. I'm an old fogey — I'd rather hear a real showtune than a track from "Mulan" (I'll Make a Man Out of You). At least they picked a tune with some drama to it and not a novelty bit from "The Jungle Book". And I thought it took guts to sing the song straight up, given its change of pace from the uptunes before it. The Disney song effectively shifted gears into the ballad section of the album. I could have done without either It's My Life or Goodbye Again, but I can't fault the group for singing what they want to sing. The dance medley is a little harder to defend — as a rule, I like a cappella dance music if it comes with a thumpin' beat. But all four of their selections are really crummy songs, I mean bad. Out of all the good club music in LA, they pick this stuff? One can only hope that on stage they played it campy for laughs. Otherwise, there is no excuse for Butterfly or its fellows - do yourself a favor and skip this track if you buy the disc.

Other than the dance number, I don't have strong feelings about how much you should like this disc. If you're an a cappella enthusiast, maybe you should buy one and judge for yourself.

The last several albums I have reviewed were all debuts, and the same goes for ToasterScent from the co-ed ScatterTones of UCLA. One thing is clear — technology is great. No longer must one muddle through several drab albums until a group comes of age. The ScatterTones join a long line of folks making decent stuff their first time around.

Unfortunately, decent is all ToasterScent is. It's almost perfectly middle of the road. The first two tracks, Accidentally in Love and Mr. Brightside are two of the strongest on the album, yet they still feel like rehash. The songs are overdone, the arrangements are uninspired, mixing is good but plays it safe, and soloists do their best at imitation. There's really nothing to make it stand out from what other folks have done before them.

The album sounds generally good. Blend is nice, though the basses are a bit dull. Reproduction is stellar, parts carefully articulated. Tuning is generally fine. Energy is decent even if it is missing a certain human element.

The ScatterTones need work regarding soloists and arrangements. Arrangements aren't bad but aren't great, just uninspired. Listening to this album I swore I had reviewed it before, and I think that's because the arrangements and much of the material are so similar to other things I have listened to.

I can't be as kind to the soloists. No one is great, and several are just plain awful. Kat Liu on Are You Happy Now made me feel like I was listening to a speech therapy video on how to properly enunciate your consonants, and Katrina Veldkamp is clearly outmatched in trying to imitate Kelly Clarkson on Since U Been Gone. Whoever is singing the duet on Goodbye Again could stand adding a few years to her tone.

The low points of the album came early on. I found the arrangement of Echo too distracting to focus on the music. Then I was heartily disappointed to see the Black Eyed Peas' Shut Up on the track list. It's just an awful song to begin with, and I don't think the best group out there could cover it well. For the ScatterTones, background vocals didn't have enough attitude to sell me on the energy.

The ScatterTones also have some great moments to build on. It's My Life has a slick groove and cohesiveness that many of the other tracks lack. I've always loved the juxtaposition of the relaxed vibe the song gives off with the clearly emotional lyrics and think it was covered well on ToasterScent. Then, despite how much I tried to resist, I couldn't help but like I'll Make a Man Out of You from Disney's "Mulan." It just exudes cheese from the first beat to the final "huhh" and is a fun little number that made the album stand out for me. If they could have captured that feel for the final Dance Dance Revolution Mix, they would have left the listener with a much better taste in his or her mouth.

I think the key to success for the ScatterTones is originality. They sound like they are trying to do exactly what the top coed groups are doing, but they understandably aren't doing it as well. If they can use their newness and energy to take their sound in a unique direction, I see great things. Otherwise they'll be stuck being average.

While some of the tracks on ToasterScent appear on too many a cappella albums, I assure you this isn't the same-old, same-old. Let's get right to the a cappella elephant in the room: the ScatterTones end ToasterScent with a Dance Dance Revolution mix. It's fun, it's unexpected, and a cappella geeks will definitely want to show it off to their outsider friends. Shut Up is also a huge highlight. Soloist Shannon Fernando can really wail, and this infectious song can hold your hand through a lot of scenarios (driving across the country, intense cleaning, waiting for a delayed flight, and as the lyrics suggest, probably relationship snafus, too). Angsty Mr. Brightside and Are You Happy Now up the rock-out factor. There There is hottt and moody, and Goodbye Again is a total package song: beautiful, driven, and impossible to get out of your head. Surprisingly, extra poppy and zingy Accidentally in Love kicks off the hits parade perfectly. The only questionable music move on ToasterScent is the detour to I'll Make a Man Out of You from the Disney film "Mulan". It's well sung, but can Mulan hold its own snuggled between Michelle Branch and No Doubt? My vote is no.

The ScatterTones join the growing number of groups who choose to record across years. Not surprisingly, two of the oldest songs by 2003-2004 members stand out as the weakest tracks. Both Echo and It's My Life are boring and sparsely written. I understand there are a number of good reasons to delay recording, usually driven by finances or a lack of material. I just hope a cappella groups understand their result will likely be compromised. With the ScatterTones, this is certainly the case. The old ScatterTones and the new ScatterTones are two very different sounding groups. They're awfully lucky that on the whole ToasterScent still sounds pretty good.

ToasterScent is enjoyable and easy on the ears. You'll like it.